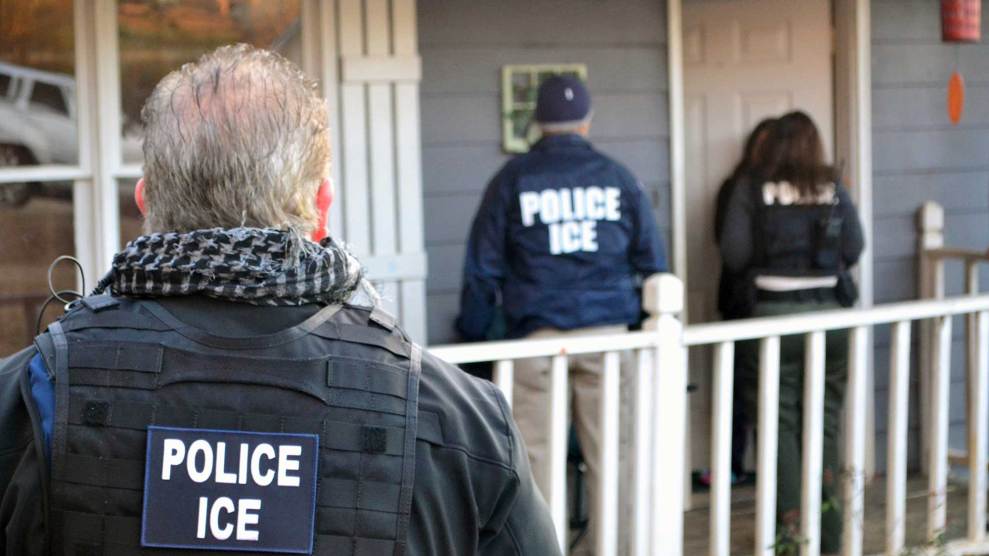 Late last week, immigration agents in Seattle arrested a 23-year-old undocumented Mexican immigrant named Daniel Ramírez Medina—the first time, according to Reuters, a “Dreamer” was apprehended since President Donald Trump entered the White House. Ramírez was brought to the United States by his parents when he was a child, and in 2014 he became one of the 750,000 immigrants to be shielded from deportation by President Barack Obama’s Deferred Action for Childhood Arrivals (DACA) program.

How Trump plans to handle so-called DACAmented people has caused considerable anxiety in immigrant communities. Reports about Ramírez’s apprehension confirm what many advocates have been saying: Despite assurances from Immigration and Customs Enforcement (ICE) that its high-profile deportation raids last week focused on serious criminals, agents also inquired about the immigration status of other people in the general vicinity—and detained those who were undocumented.

According to Homeland Security Secretary John Kelly, 680 immigrants were arrested last week in what he called “a series of targeted enforcement operations” spread out over 12 states. Kelly echoed ICE’s claims that these deportation actions were no different from those the agency has carried out for years, and he noted that roughly 75 percent of those arrested “were criminal aliens.” But the unusually public and coordinated nature of ICE’s enforcement surge—”not entirely a coincidence,” according to an agency spokeswoman—has led to widespread misinformation about what immigration officials are doing.

Here’s what we’ve learned from the past week—and what we’re still trying to figure out:

ICE is casting a wider net.

Even before news broke of Ramírez’s arrest, immigrant rights advocates had complained of people without criminal records being questioned and detained by ICE agents. Sarah Owings, the Georgia-Alabama chapter chair of the American Immigration Lawyers Association (AILA), points to a passage in the agency’s press release on last week’s actions: “During targeted enforcement operations ICE officers frequently encounter additional suspects who may be in the United States in violation of federal immigration laws. Those persons will be evaluated on a case by case basis and, when appropriate, arrested by ICE.” “So what that says,” Owings concludes, “is that anybody’s a suspect.”

In Ramírez’s case, Reuters reported, it was his father who was originally targeted by ICE. When agents entered his father’s house on Friday morning, they asked Ramírez about his immigration status. Even after he told them about his work permit under DACA—which was renewed in 2016—they brought him to a detention center in Tacoma. (An ICE spokeswoman said in a statement that Ramírez was a “self-admitted gang member,” a claim that his lawyers say he denies.)

In a Washington Post story from last weekend, an unidentified immigration official explained the raids this way: “Big cities tend to have a lot of illegal immigrants. They’re going to a target-rich environment.” “What also may be true,” says ACLU senior staff attorney Andre Segura, “is that ICE could be retaliating against cities that have more welcoming policies, just based on where they’re doing it so far. But it’s difficult to tell how this will play out.”

Most of the rumors on social media weren’t true.

Social media flared last week with the fears of immigrants and their advocates—fueled by a series of unconfirmed rumors that caused panic and confusion. But in many cases, the rumors just didn’t check out. In Kansas City, a Facebook post claimed that ICE agents were going to stop churchgoers; it was later debunked. Segura says he found no evidence of ICE checkpoints in Austin, despite multiple tweets and posts about them. He also hadn’t heard any confirmation of multiple rumors of parents being detained while picking up their children at school.

Segura notes that in past enforcement surges, ICE has typically moved in the early morning hours. “But it seems like now they’re being done in a little bit of a cavalier way,” he says. “I think that can be purposeful, but it can cause a lot of panic.” By making arrests in such a public way, ICE has created uncertainty and speculation about what’s really happening.

But sometimes reality is even more troubling than rumor: The El Paso Times reported Wednesday that agents had arrested a transgender woman at the El Paso County Courthouse after she had just gotten a protective order as an alleged victim of domestic violence. Worse yet, her abuser may have tipped them off.

Because ICE has failed to release more complete information, it’s still unclear what crimes the “criminal aliens” arrested during last week’s raids had committed. Were the majority of them violent criminals? Or were many of them guilty of minor offenses like driving without a license?

But it’s not just the lack of statistics. Several immigration attorneys and advocates have told me that since Trump’s election, ICE agents have been far less forthcoming with information. Owings says ICE has pulled out of an upcoming AILA chapter conference. A Customs and Border Protection rep will appear but won’t take questions from attorneys about Trump’s executive orders. “ICE is very reticent to give us any information,” Owings says. “Our liaison contacts are all really clammed up. They just don’t want to tell us what’s going on, because they don’t want to say the wrong thing and then be held to that word. Because none of this was discussed with the appropriate agencies prior to the pronouncement of these orders.”

And it remains to be seen how ICE will communicate with Congress.

1. After attending the ICE meeting it’s hard not to conclude that President Trump has started his mass deportation plan.

Also, this isn’t helping. At all.

This is not true. DHS also confirms it is 100% false https://t.co/MFIJci7XaU