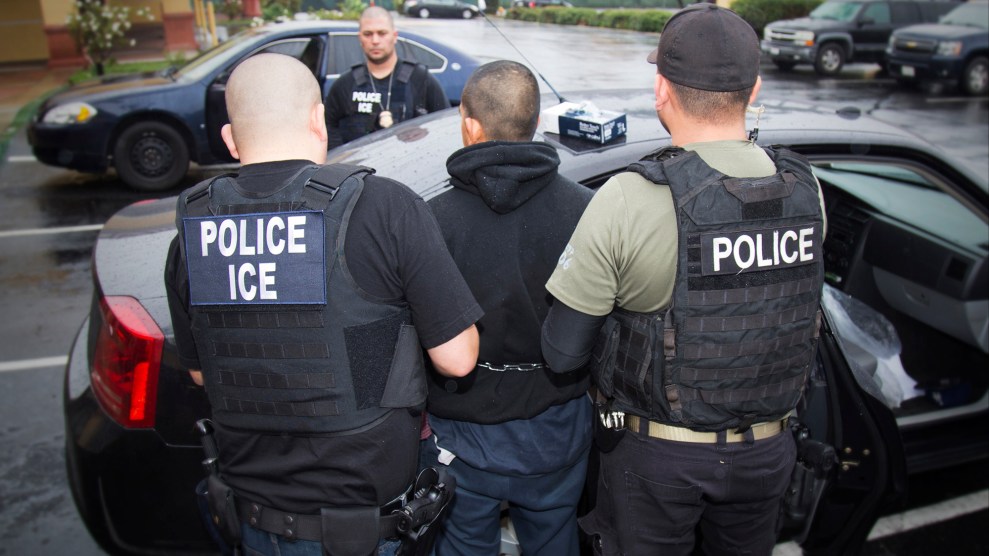 Donald Trump is quickly amassing the means to make good on his promise to deport millions of people from the United States. One of those tools is a federal program that enlists state and local cops and jail officials to identify people they believe may be undocumented immigrants. The Obama administration scaled down the program, in part due to criticism that it encouraged racial and ethnic profiling, created financial incentives to detain immigrants, and undermined relations between the police and immigrant communities. Now Trump is preparing to bring it back.

The program is known as 287(g) for the section of the Immigration and Nationality Act of 1996 that created it. It established “task force” agreements that allow Immigration and Customs Enforcement (ICE) to deputize local and state law enforcement officers as immigration agents. The program gives these law enforcement officers the authority to stop, interrogate, and arrest anyone they believe to be unauthorized immigrants. It also gives deputized jail administrators access to immigration databases so they may refer undocumented immigrants to ICE for possible deportation. The 287(g) program enabled more than 175,000 deportations between 2006 and 2013, according to an analysis by the Marshall Project.

Last Tuesday, Homeland Security Secretary John Kelly issued memos to senior officials in his department outlining instructions for enforcing the president’s January 25 executive order, which called for an aggressive effort to deport undocumented immigrants regardless of whether they had committed serious crimes. Referring to 287(g), Kelly called the program a highly effective “force multiplier” that has led to the identification of more than 400,000 “removable aliens” between 2006 and 2015, and he directed ICE to “engage immediately with all willing and qualified law enforcement jurisdictions” that may cooperate with the federal government under 287(g).

“This is the deportation machine. If Trump is going to meet the kinds of numbers he announced during his campaign, this is how it will happen.”

“This is the deportation machine,” says Daniel Stageman, a researcher at the John Jay College of Criminal Justice who studies immigration and criminal justice. “If Trump is going to meet the kinds of numbers he announced during his campaign, this is how it will happen.” Chris Rickerd, a policy counsel at the American Civil Liberties Union, puts it in stark terms: “There’s potential for this to be an enormous driver of people coming into the system through the task forces and people being processed in the jails. 175,000 is a staggering number of people to have gone through this, but that may be only a small fraction of what’s intended now.”

Trump’s executive order upends the Obama administration’s policy of prioritizing immigrants convicted of serious crimes for deportation, which it adopted in late 2014. Now, “the criteria basically allow you to arrest and deport anybody you want,” says Darrel Stephens, the executive director of the Major Cities Chiefs Association, a professional organization of police chiefs and sheriffs. “There’s a lot of concern that people will get caught up in this who aren’t the worst offenders.” As Rickerd notes, “The lack of prioritization means that just about every one of the 11 million people here without authorization has become a target.”

The 287(g) program emerged in a series of fits and starts. The first agreements between DHS and local law enforcement began in the wake of September 11. After a lull, another surge of agreements began in 2006 after the Bush administration pushed the program in response to increased immigration from Mexico and Latin America. In 2012, the Obama administration rescinded all of the program’s “task force” agreements after a series of racial and ethnic profiling controversies. Jail agreements were still issued, but slowed, under Obama. Currently, there are 37 agreements in place, down from more than 70.

The implications of resuscitating a program that Rickerd describes as “almost dormant” raises questions about the financial motivations of the jurisdictions that participate. Many jurisdictions that have made 287(g) jail agreements have also had detention contracts with ICE, receiving per diem fees for every immigration detainee they held. “It’s is a direct pipeline for their for-profit detention infrastructure,” says Rickerd. In areas with both task force and jail agreements, the concerns compound. “The task forces could arrest people on trumped-up charges, to book them for 287(g) processing for the jail.”

“The criteria basically allow you to arrest and deport anybody you want. There’s a lot of concern that people will get caught up in this who aren’t the worst offenders.”

Law enforcement and mayors’ associations have long been critical of programs like 287(g), claiming that they create a rift between communities and the police, making it more difficult to focus on serious offenses. “Whenever local police get involved in immigration enforcement, that causes a great deal of reluctance on the part of undocumented immigrants and other immigrants to report crimes and victimization to the police,” says Stephens. Victims of spousal abuse, for example, may fear calling the police if they think it means they could get deported. “Community trust is a really big deal to local police. They cannot function effectively if they don’t have as good a relationship as they can get.”

Some of Trump’s deportation plans, such as hiring thousands of ICE and border patrol agents, will require Congressional budget approval. But expanding the 287(g) program doesn’t require Congress’ sign-off, and is a minimal cost to the feds. The expense will fall on local jurisdictions, and if the past is any indicator, plenty will foot the bill. Stageman notes, “There’s a clear fiscal incentive for a lot of these jurisdictions to take part, on top of an already existing political and ideology incentive.”

Because the recent executive orders and DHS memos call for a massive expansion of immigration detention, Stageman predicts that state and local jails that have seen a reduction in their populations will start “scrambling to sign detention agreements” with ICE. “Because the system is going to expand so quickly, the structures necessary to ensure some standard of human rights in detention are essentially going to collapse,” Stageman says. “You will see a tremendous amount of abuse.”