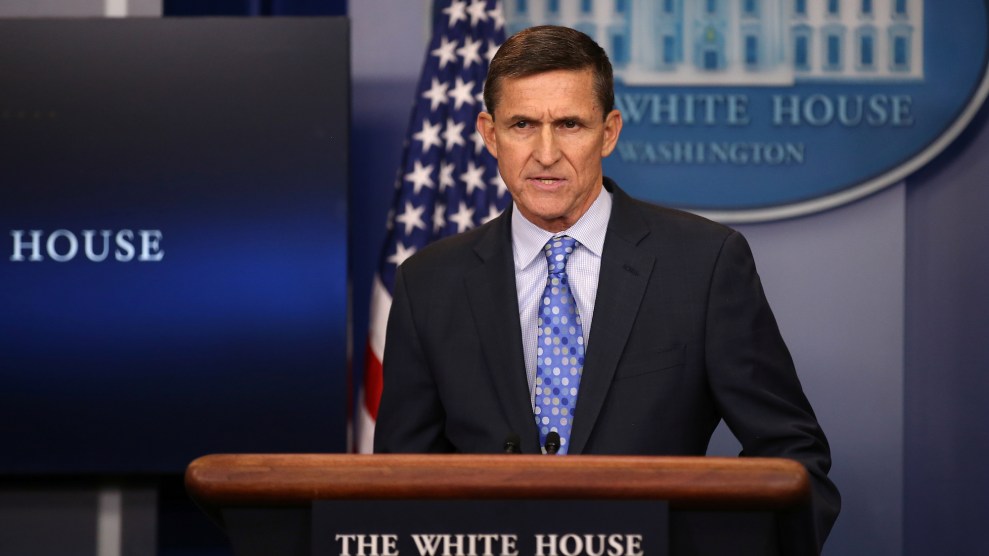 The Trump-Russia scandal has so far resided in the territory between smoke and fire. Donald Trump associates have reportedly been investigated for interactions with Russia, but the FBI has not released information on these contacts. Trump has pushed an America First policy, but he has curiously denied or downplayed the US intelligence conclusion that Vladimir Putin mounted an extensive covert campaign to subvert the 2016 election to benefit Trump and instead has cultivated an odd bromance with the Russian autocrat. A series of memos written by a former counterintelligence officer contained allegations that Russian intelligence had spent years cultivating or co-opting Trump and gathering compromising information on him and that the Trump camp had colluded with Russians, but the specifics have not been confirmed.

Yet now one piece of the Trump-Russia puzzle has been clearly depicted: Trump’s national security adviser was in cahoots with Russia to undermine the US government’s effort to punish Moscow for hacking the US election—and he apparently lied about it. If Trump does not fire him—and if Washington’s political-media complex (including Republicans) does not go ballistic over this revelation—then the Putinization of America has taken another big step forward.

Flynn’s communications with Russian Ambassador Sergey Kislyak were interpreted by some senior U.S. officials as an inappropriate and potentially illegal signal to the Kremlin that it could expect a reprieve from sanctions that were being imposed by the Obama administration in late December to punish Russia for its alleged interference in the 2016 election.

Here was Flynn working against US policy—against steps President Barack Obama had ordered in response to Putin’s meddling in the US election. He was in essence telling Moscow not to fret over these sanctions and that Russia would be rewarded once Trump moved into the White House. He was explicitly aiding the enemy that had attacked US democracy.

This move was in sync with the approach taken by Trump, who has refused to criticize Russia for intervening in the election. After Trump’s first call with Putin as president, the White House accounts of the call contained no indication that Trump had even raised the subject.

Moreover, the Post story—which was based on interviews with nine current or former officials at security and law enforcement agencies—suggests that Flynn is not honest and not smart.

Since the news first broke weeks ago that Flynn had talked with Kislyak in December, Flynn and the White House have denied that sanctions were discussed. White House Press Secretary Sean Spicer insisted Flynn’s conversation with Kislyak was about more mundane matters, such as conveying holiday greetings and setting up a post-inauguration call between Trump and Putin. In an interview with CBS News last month, Vice President Mike Pence asserted, “They did not discuss anything having to do with the United States’ decision to expel diplomats or impose censure against Russia.” Pence noted that he had spoken to Flynn about this. If so, it would seem that Flynn lied to him.

The Post reports there is no ambiguity about Flynn’s conversation with the Russian ambassador:

All of those officials said ­Flynn’s references to the election-related sanctions were explicit. Two of those officials went further, saying that Flynn urged Russia not to overreact to the penalties being imposed by President Barack Obama, making clear that the two sides would be in position to review the matter after Trump was sworn in as president.

“Kislyak was left with the impression that the sanctions would be revisited at a later time,” said a former official.

A third official put it more bluntly, saying that either Flynn had misled Pence or that Pence misspoke. An administration official stressed that Pence made his comments based on his conversation with Flynn. The sanctions in question have so far remained in place.

Which brings us to the not-very-smart part of this story. How do all these officials know what was really said between Flynn and the Russian? US intelligence routinely conducts surveillance aimed at Russian diplomats and monitors their communications. The Post story clearly indicates that Flynn’s conversation with Kislyak was intercepted and that a transcript of it has been passed throughout the intelligence community. Flynn, of course, should have been aware that any discussion he had with the Russian ambassador was vulnerable to surveillance. After all, not too long ago he was head of the Defense Intelligence Agency.

This is a scandal. A big scandal. Republicans and Democrats should be screaming for investigations and public hearings.

This makes Flynn’s behavior dumb on two counts. First, he should not have explicitly discussed undermining US policy with Kislyak, because he ought to have realized this conversation would be picked up by US intelligence. Second, he should not have told Pence and others that sanctions had not been covered in the conversation, because he should have known there was evidence of what had actually transpired during his chat.

On Wednesday, Flynn denied to the Post that he had discussed the sanctions with Kislyak. The next day, the paper reports, “Flynn, through his spokesman, backed away from the denial. The spokesman said Flynn ‘indicated that while he had no recollection of discussing sanctions, he couldn’t be certain that the topic never came up.'” So he has shifted from an emphatic denial to weasel words. The FBI, according to the paper, is continuing to investigate, though it’s unclear if any laws were broken. The Logan Act of 1799 does prohibit US citizens from meddling in US foreign policy matters, but it has never been successfully applied.

Flynn’s conversation with Kislyak, it turns out, was part of a series of contacts. And this, too, is suspicious, given Flynn’s history of interactions with the Putin regime. In December 2015, he was paid by RT, the English-language propaganda arm of Moscow, to attend a gala, where he sat at a table with Putin. (Flynn has steadfastly refused to say how much he pocketed for this appearance.) The Russian ambassador told the Post that he had been communicating with Flynn since before the election, but he declined to say what they had discussed. Oddly, he would not reveal the origin of his relationship with Flynn.

Last month, Pence declared there had been no contact between the Trump campaign and Russia. “Of course not,” he said. “Why would there be any contact between the campaign? This is all a distraction, and it’s all part of a narrative to delegitimatize the election and to question the legitimacy of [Trump’s] presidency.” But when Flynn was talking to Kislyak prior to the election, he was a senior campaign aide and surrogate for Trump. Pence was peddling a falsehood. And this raises the question: Why was Trump’s top national security aide talking to Russia while Moscow was attacking the US election to help Trump? What was he signaling to Moscow? What was he being told?

This is a scandal. A real scandal. A big scandal. Republicans and Democrats should be screaming for investigations and public hearings. (Yesterday, House Democrats did resort to a little-used legislative tool to force a debate on both Trump’s conflicts of interest and the possible ties between his inner circle and Russia.) And Flynn should be booted. The evidence is strong that he lied and that he cozied up to Moscow while it was assaulting American democracy. Worse, for a supposed national security maven, he acted in a stupid manner and practiced awful tradecraft. Placing the nation’s security in his hands of a dishonest and reckless fellow is risky business.

The Trump-Russia story has faded in recent days, amid other Trump chaos. But if this Flynn news does not cause a firestorm—and threaten Flynn’s position—then something is very rotten in the nation’s capital.

UPDATE: On Friday morning, the Trump administration confirmed that Flynn did speak to the Russian ambassador about the sanctions. And Rep. Adam Schiff (D-Calif.), the senior Democrat on the House intelligence committee, called for Flynn’s dismissal with this statement: “The allegation that General Flynn, while President Obama was still in office, secretly discussed with Russia’s ambassador ways to undermine the sanctions levied against Russia for its interference in the Presidential election on Donald Trump’s behalf, raises serious questions of legality and fitness for office. If he did so, and then he and other Administration officials misled the American people, his conduct would be all the more pernicious, and he should no longer serve in this Administration or any other.”