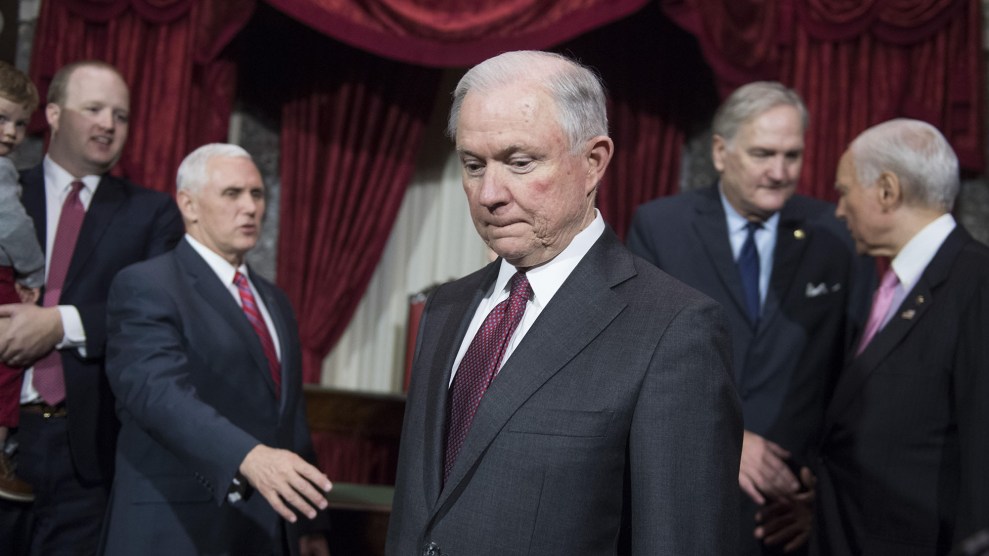 Attorney General Jeff Sessions marked the final day of Black History Month on Tuesday by paying homage to the role of the Justice Department in ending the era of segregation. Invoking his own childhood in rural Alabama, he remarked on how far the country has come from the days of segregated schools, discrimination in hiring, and the disenfranchisement of African Americans.

“The Civil Rights Act and the Voting Rights Act went pivotal points in our history,” Sessions said, addressing a modest gathering in the Justice Department headquarters prior to a film screening. “A huge part of that progress was a direct result of the dedicated and principled work of this Department of Justice.”

His brief remarks, however, stood in contrast to actions that the department has already taken, at his direction, to retreat from the Obama administration’s work on civil rights—and particularly its opposition to voter suppression efforts across the country. The evening before Sessions’ address, the Justice Department announced that the government would withdraw a crucial claim in the lawsuit against Texas’ draconian voter ID law.

In 2011, Texas passed one of the strictest voter ID laws in the country, requiring government-issued identification, such as a passport, driver’s license, military ID, or weapons permit in order to cast a ballot. The law did not allow voting with a university-issued ID. A federal court would later find that 608,470 registered voters in Texas, many of them young and minority voters, now lacked the identification needed to vote. A different federal district court blocked the law on the basis that it discriminates against minority voters.

This is a very important piece of the case: A finding of discriminatory effect necessitates softening the law, but a finding of discriminatory intent would allow the judge to throw it out entirely. According to election law expert Rick Hasen, a discriminatory intent finding could also “provide a predicate, under Section 3 of the [Voting Rights] Act, to put Texas back under federal supervision for up to 10 years.” That means Texas would have to seek federal approval before making any future changes to voting laws and procedures.

On Monday evening, the Justice Department withdrew its claim of discriminatory intent and asked the court to suspend ruling on the intent issue until the state legislature can amend the law.

The Texas law put up significant barriers to the ballot for many voters, including some of the same people whose rights Sessions declared had been restored by the Justice Department. Take the story of Elizabeth Gholar, an elderly voter who grew up in the Jim Crow South. As The Nation’s Ari Berman recounted recently, Gholar had to hire a lawyer before she could get Texas officials to grant her a voting-eligible identification card under the law. ?”Voting is a right that everybody else had,” she testified in federal court in 2014. “And it’s been taken away again.”

Sessions, a former US senator from Alabama who has battled accusations of racism for years, was confirmed by the US Senate as attorney general despite vociferous opposition by civil rights groups and African American lawmakers who feared that Sessions would come down on the wrong side of civil rights and voting rights cases. Those fears are already being borne out.

On Tuesday, the same day Sessions promised to “protect civil rights” in honor of Black History Month, civil rights lawyers in Texas were arguing at a crucial hearing on the discriminatory intent issue. For the first time in the case, the Justice Department was not on their side.