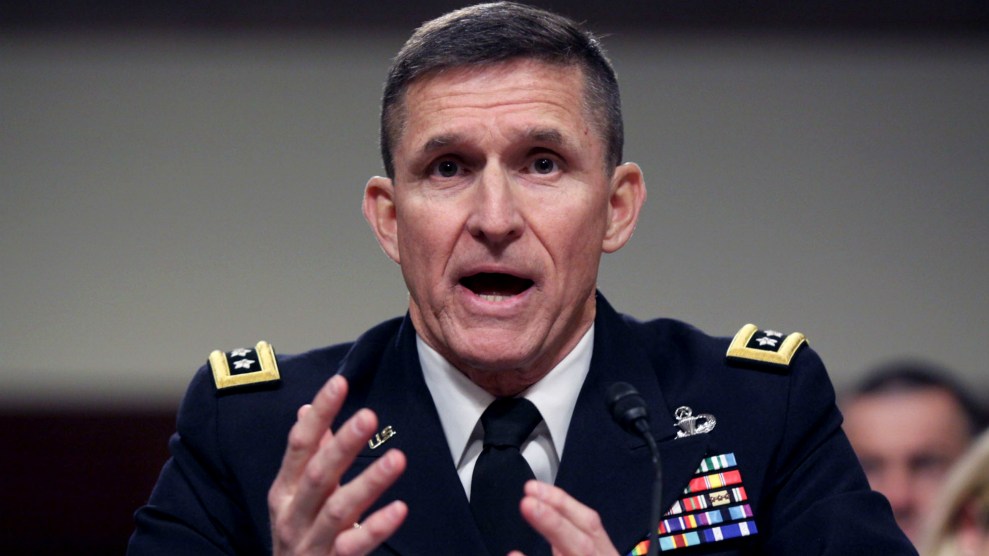 A key Trump White House official may have violated the Constitution in 2015 when he delivered a paid speech in Moscow and dined with Vladimir Putin, congressional Democrats alleged Wednesday. According to the lawmakers, Michael Flynn, the controversial national security adviser, may have run afoul of the Constitution’s Emoluments Clause.

“I do public speaking. It was in Russia. It was a paid speaking opportunity.”

Since Donald Trump’s election in November, ethics experts have raised concerns that the president’s many overseas business interests might violate the Emoluments Clause—a provision that prohibits federal office holders from accepting financial benefits from a foreign government. But the possibility that Flynn, a retired Army general, may have also violated the clause is new.

The concern was raised in a letter signed by top Democrats on the House Oversight, Armed Services, Judiciary, Homeland Security, Intelligence, and Foreign Affairs committees and focuses on a trip to Russia that Flynn took in December 2015. On the trip, Flynn attended a 10th anniversary gala celebration for RT, the pro-Russia news outlet owned by the Russian government. At the gala, Flynn appeared on a panel and then sat next to Putin during dinner. Flynn retired from the military prior to the trip, but the Democratic letter notes that he may still have been covered by the Emoluments Clause.

In an interview with the Washington Post last year, Flynn downplayed the importance of the meeting by making it clear that he was only there as a paid speaker.

“I was asked by my speaker’s bureau, LAI. I do public speaking. It was in Russia. It was a paid speaking opportunity,” Flynn told the Post. “The gig was to do an interview with [RT correspondent] Sophie Shevardnadze. It was an interview in front of the forum, probably 200 people in the audience.”

Flynn would not tell the Post how much he was paid for the event. The White House did not immediately respond to Mother Jones’ request for comment on the letter.

Flynn had a long career in the US Army, rising to the rank of lieutenant general, and spent two years as the head of the Defense Intelligence Agency under Barack Obama. After clashing with Obama, Flynn retired from the Army in August 2014, roughly 16 months before his trip to Moscow. But the House Democrats’ letter points out that the Department of Defense has issued multiple warnings to retired military officers about accepting payments from foreign governments.

The Democrats point to other Department of Defense memos making clear that the restriction covers commercial entities owned by foreign governments, which could include RT because it is part of the state-owned RIA Novosti press agency.

The letter was sent to newly confirmed Secretary of Defense James Mattis. It asks for an investigation, including an examination of communications between Flynn and RT, as well as the details of how much he was paid.