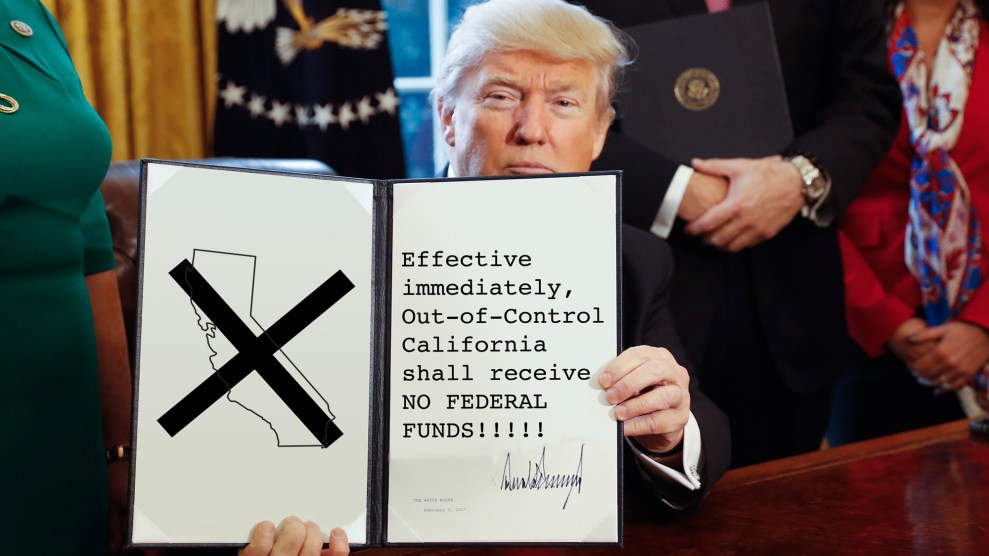 One of President Donald Trump’s favorite threats is cutting federal government funding to states, cities, and other entities that refuse to cooperate with his policies. On January 25, he issued an executive order titled “Enhancing Public Safety in the Interior of the United States,” which warns “sanctuary cities” that they could lose federal funds if they continue to protect undocumented residents from deportation. After an appearance by Breitbart‘s Milo Yiannopoulos at the University of California-Berkeley was canceled amid violent protests, Trump tapped out the following tweet:

If U.C. Berkeley does not allow free speech and practices violence on innocent people with a different point of view – NO FEDERAL FUNDS?

And during a pre-Super Bowl interview with Fox News’ Bill O’Reilly, Trump doubled down on California: “If we have to, we’ll defund…We give tremendous amounts of money to California. California in many ways is out of control, as you know.”

Here’s the thing: Trump can’t just yank funding from states or cities or universities that upset him. Yet the matter is far from resolved: Several cities and one state have already filed lawsuits against the Trump administration over its threats, all but ensuring a battle that could end up before the Supreme Court. Here’s what you need to know about the legal issues behind this fight.

Why can’t the president withhold federal money from states or cities?

The short answer is that Congress, not the White House, has ultimate power over the federal purse. The president’s budget requests may direct Congress how to allocate federal spending, but the matter is not entirely in his hands. And he has no authority to withhold or rescind spending that’s already been authorized.

So couldn’t Congress defund a state or city if the president asked it to?

Hypothetically, Congress could pass a law or budget bill that puts conditions on the federal funding provided to, say, out-of-control California. But numerous Supreme Court decisions protect state and local governments against this type of vindictive policymaking. When the federal government raised the national minimum drinking age to 21 in 1984, it prodded states into enforcing the new law by stipulating that any state that didn’t comply would lose 5 percent of its federal highway construction funds. South Dakota wasn’t happy about this and filed a lawsuit against the federal government. South Dakota v. Dole worked its way up to the Supreme Court, which found that the federal government can apply conditions to funding—with a few limits. One of those limits is the stipulation that any conditional spending must not be “coercive.” As Justice William Rehnquist wrote, there is a point when “pressure turns into compulsion,” and a state might unconstitutionally be forced to comply because it needs the federal money to operate. Additionally, conditional funding can only apply to new money, not funding that’s already been committed.

As a practical matter, states and cities receive federal money through hundreds of different appropriations bills and programs. If Trump and congressional Republicans wanted to effectively defund California, they would have to modify each federal spending provision that affects the state. Conceivably, they could pass a bill that instructs the Department of the Treasury to stop sending money to Sacramento, but that would spark an enormous constitutional crisis.

Yes—but again there are limits. When the Supreme Court ruled on the constitutionality of Obamacare in 2012, it also considered the law’s expansion of state Medicaid programs. The Affordable Care Act had threatened to cut off all Medicaid funding to states should they fail to expand the program in accordance with its standards. Citing South Dakota v. Dole, Chief Justice John Roberts wrote in his opinion that this ultimatum was “a gun to the head” of the states. For many states, federal Medicaid money comprises more than 10 percent of total revenue, and losing that money would effectively cripple them. Six other justices agreed with Roberts on this point, and Medicaid expansion was left to the states.

What about the 10th Amendment?

The 10th Amendment of the Constitution says that any power not delegated to the federal government becomes the responsibility of the states. This is the basis of America’s federal system, whereby states have the freedom to pass laws that are distinct from those passed by Congress.

The Supreme Court has long interpreted the 10th Amendment as the foundation for a check on federal power. Take the case of Printz v. United States. After Congress passed the Brady Handgun Violence Prevention Act in 1993, a Montana sheriff named Jay Printz challenged its requirement that local law enforcement agencies conduct background checks on gun buyers. He argued that Congress was acting outside of its authority to compel state-level officials to enforce federal law. In 1997, five Supreme Court justices, led by Antonin Scalia, agreed.

The Printz decision underscores what Duke University law professor Matthew Adler calls “an external constraint upon congressional power—analogous to the constraints set forth in the Bill of Rights—but one that lacks an explicit textual basis.” In other words, decades of Supreme Court rulings on the 10th Amendment have formed an effective check on federal power by the states. And that could mean that just as Printz was allowed to resist conducting federally mandated background checks, a court could find that officials in sanctuary states and cities are allowed to avoid enforcing federal immigration law.

Don’t conservatives like the 10th Amendment more than progressives?

In the past, the 10th Amendment has provided cover for advocates of states’ rights and efforts to resist federal civil rights efforts such as integrating schools. More recently, the 10th Amendment became a rallying cry for the Obama administration’s opponents. Sen. Ted Cruz (R-Texas) is a big fan of the 10th, and tea partiers and “Tenthers” invoked the amendment to push back against Obamacare and even call for secession.

Now it’s liberals who are warming to the promise of the 10th Amendment. San Francisco’s recently filed federal lawsuit against the Trump administration argues that, defunding aside, the anti-sanctuary-city executive order violates the 10th Amendment. The city claims that it is within its rights to not cooperate with federal authorities under the “anti-commandeering” precedent set in Printz, which says higher jurisdictions may not “commandeer” local resources to enforce federal rules. Likewise, Massachusetts has also invoked the 10th amendment against Trump’s “Muslim ban” executive order. Several Boston suburbs have also cited the 10th in their lawsuits against the administration’s sanctuary city order, as has Santa Clara County, California, the home of Silicon Valley. Last week, Portland’s mayor issued a statement that the 10th Amendment protects its sanctuary city policies too.

How could this battle play out?

The feds depend on state and local officials to enforce their policies. The federal system is set up to encourage cooperation between state and federal officials. If that falls apart, Trump will have difficulty enacting his agenda. As Yale law professor Heather Gerken recently argued on Vox, “Even if President Trump spends enough political capital to win this or that battle against blue cities and states, he cannot win the war. The federal government doesn’t have the resources to carry out Trump’s policies.”

The funding question remains up in the air since Trump hasn’t given any indication to how, exactly, he would defund cities and states. However, given that California is in the process of passing legislation that effectively makes the entire state a sanctuary for undocumented immigrants, and given that its elected officials have been vocal about their opposition to Trump, we could see a California v. U.S. case in the near future if Trump tries to follow through. On Monday, state Attorney General Xavier Becerra reiterated his commitment to pushing back against Trump’s defunding threat. “We will fight anyone who wants to take away dollars that we have earned and are qualified for simply because we are unwilling to violate the Constitution under these defective executive orders,” he said.