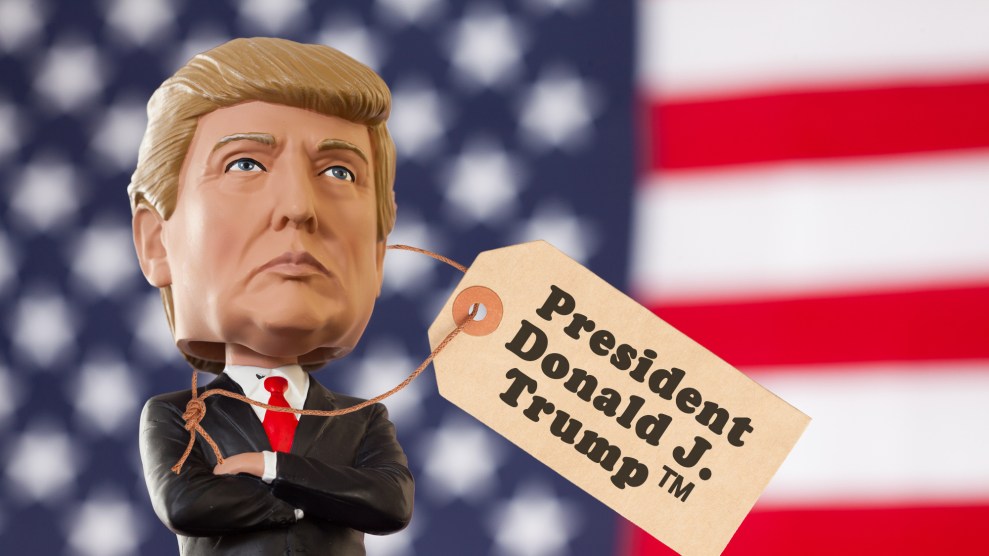 No one has entered the White House with a greater sense of self-worth than Donald Trump. The president considers his personal brand to be one of his biggest assets—valued at $3.3 billion, in his own estimation. (Forbes, which has spent years reporting how Trump inflates his net worth, says the actual value is intangible.) Trump and his companies have registered hundreds of trademarks with his name in them, from The Donald to The Trump Follies. Never in American history has there been a president more concerned with controlling his image, not simply as a matter of personal pride, but as a matter of preserving his bottom line.

And yet, as he’s become a politician and now a public servant, Trump seems to have lost control of his image. A quick search turns up tons of unofficial Trump gear, from t-shirts to Chinese-made Make America Great Again hats. Then there are the cheesy commemorative statues, creepy dolls, and bobbleheads. Also Trump punching bags, dartboards, and toilet paper. And if a recent trademark application is accepted, you may soon be able to purchase “novelty toy items in the nature of fake poop” called Trump Turdz.

So does Trump still control his name and likeness now that he’s become the biggest household name on the planet? The short answer is yes. Which means it’s probably just a matter of time before the famously litigious president threatens to sue someone for using his name or image without his permission.

If he does so, Trump will likely invoke his “right of publicity”—the right to control the commercial use of his own name and image. This right is most often cited by celebrities whose faces end up in ads or on products without their permission. But politicians also enjoy the right of publicity, though they seldom claim it. “It’s extremely rare for a politician to invoke the right of publicity,” says Tyler Ochoa, a professor of law at Santa Clara University who’s an expert on publicity rights. “Mostly because it would look bad. It makes it look like they’re trying to capitalize on their office for private gain or trying to suppress freedom of speech.”

While there are no rules prohibiting presidential lawyers from handing publicity suits, Masson says, “This is not a job for White House counsel.”

While celebrities are usually forgiven for jealously guarding their personal brands, Americans treat politicians’ images as public property. “Political figures are supposed to be busy running the country,” says Jonathan Faber, an intellectual property attorney whose clients have included Rosa Parks, the estate of Princess Diana, and a couple of former presidents (whom he’s not at liberty to name). “If a sitting official has lawyers sending cease-and-desist letters to an ad agency or a company manufacturing products, it often doesn’t play out very well.”

Most unapproved portrayals of politicians are protected by the First Amendment, particularly if they involve opinion, commentary, parody, or other forms of protected speech. But unapproved commercial uses of politicians’ names and likenesses are not protected, especially if someone is transparently trying to make a buck. Shortly after taking office, President Barack Obama fired a couple of legal warning shots at companies that tried to cash in on his and his family’s popularity, including a clothing firm that put up a Times Square billboard showing him in one of its jackets, and the maker of Beanie Babies, which had cranked out dolls named Sweet Sasha and Marvelous Malia. After that, companies largely respected the line Obama had drawn. “The president has a lot of clout,” Faber says. “Most companies don’t want to do something that might offend the president.”

Despite his initial promise to keep a close watch on his image, Obama would eventually ignore thousands of products with no political message that likely infringed on his publicity rights. Sean Masson, a civil litigator who has written about the presidential right of publicity, notes some obvious examples, such as a “Yes We Can” can opener, chicken “Obama-Fingers,” and Obama condoms (“The ultimate stimulus package”). Yet Masson thinks Obama was smart to pick his intellectual property battles, and would advise Trump to do the same. Faber agrees that politicians should exercise discretion when enforcing their right of publicity. “You should respond to things that are clear infringements and would be well advised to tolerate things that are nonactionable,” he says.

Nonetheless, a handful of major politicians have gone after personalized products or ads that bothered them. In 2004, California Gov. Arnold Schwarzenegger filed a right of publicity suit against the maker of a bobblehead that depicted him wearing a suit with a bandolier and an assault rifle. Ochoa describes it as a case of “stealth defamation”—meaning that Schwarzenegger was trying to shelve a product that made him look bad without actually filing a defamation case, which would have forced him to prove that he’d been intentionally disparaged. Such Hollywood hubris wasn’t a good look for the newly-elected Governator, and “he was pretty quick to settle once the news hit the media,” Ochoa recalls. (The bobblehead maker agreed to disarm the figure and made a donation to Schwarzenegger’s nonprofit afterschool program.)

“It’s extremely rare for a politician to invoke the right of publicity. It makes it look like they’re trying to capitalize on their office for private gain or trying to suppress freedom of speech.”

In 1997, New York City Mayor Rudy Giuliani sued New York magazine for running ads on buses that used his name without permission. A federal judge rejected his complaint, noting that “one who has chosen to be Mayor, and therefore to be the subject of daily commentary and controversy, cannot avoid the limelight of publicity—good and bad.” In 1999, Minnesota Gov. Jesse Ventura sent a cease-and-desist letter to a woman who made a Valentine’s Day card featuring him in the signature feather boa he’d worn as a pro wrestler. (She stopped making them.) And in 1970, Vice President Spiro Agnew complained his privacy had been violated by a dartboard that featured a drawing of his face and the phrase “Et Tu, Spiro!” The dartboard’s makers responded that their product was making a political comment and was protected by the First Amendment. The company enlisted the help of radical lawyer William Kunstler, and the matter was settled out of court.

It’s not hard not to imagine the president following in the footsteps of similarly thin-skinned personalities like Agnew and Giuliani and celebrity politicians like Ventura and Schwarzenegger. In 2013, Trump got into a beef with Mac Miller, accusing the rapper of “illegally” using his name without permission in a song titled “Donald Trump”:

Little @MacMiller, you illegally used my name for your song “Donald Trump” which now has over 75 million hits.

Last February, a Los Angeles artist named Illma Gore published a portrait of a naked, un-bigly endowed Trump tilted “Make America Great Again” that quickly went viral. Gore says that she was contacted by people claiming to represent Trump who threatened both copyright and right of publicity claims, but no lawsuit materialized. (The incident recalls the 1978 case in which Muhammad Ali sued Playgirl [NSFW] for running an illustration of a nude boxer who looked just like “The Greatest”—at least above the trunks.) Not long after Trump trademarked “Make America Great Again” in 2015, his lawyers sent cease-and-desist letters to CafePress and other sites that were selling unapproved Trump merch.

Though the president has yet to object about his image being exploited since his election, Faber believes “it’s only a matter of time.” Trump’s ongoing business interests give him additional incentives for pursuing anyone he thinks is ripping off his brand. And he has more resources and avenues to do so than his predecessors. For the first time, “we have a president who has the ability to lean on trademark registration as an added argument,” Faber says. “There are some pending trademark applications that I’m sure Donald Trump would not be particularly fond of.”

If Trump does pursue a right of publicity case, he’d be wise to do it on his own time and with his money, says Masson: “It’s important to pursue it in your personal capacity, not in your capacity as a sitting president.” And while there are no laws or rules prohibiting presidential lawyers from getting involved in publicity suits, Masson says, “This is not a job for White House counsel.” Since Trump has not completely separated himself from his companies and investments, using taxpayer money to protect his personal brand would look unseemly. Not that bad PR or the appearance of conflicts of interest have ever deterred Trump. “The president has a track record for really knee-jerk policy decisions,” Masson says. “And the chances are that if he tries to enforce his right of publicity rights, he’ll do it in an equally ham-fisted manner. While he’s legally entitled to do so, I don’t think it gains him anything politically. In fact, I think it hurts him.”

Anyone who’s holding off on releasing a Trump product until his name and image enter the public domain has a long wait ahead. They’re his for the rest of his life. Federal law also prohibits anyone from using a deceased former president’s “name, portrait, or signature” without the approval of his widow, if she outlives him. A president’s estate may control his intellectual property for many years following his death. (The Ronald Reagan Presidential Foundation, for example, owns the rights to the Gipper’s signature.) And the Trump Organization could lay claim to its namesake’s image well into the 21st century.

When—or if—the day comes when someone wants to name a public building or piece of infrastructure after Trump, there’s little chance of stepping on his publicity rights. That means that, conceivably, a name whose value stems from its use on luxury hotels and vanity brands could end up on a sanitary landfill or sewage treatment facility. (In 2008, San Francisco voters considered a ballot measure that would have named the municipal wastewater plant after President George W. Bush; it was rejected.) If Trump tried to stop such a move, Ochoa says, “I think a court would probably say that the criticism falls under the First Amendment. And if they name an airport or a school after him, he’s not going to object. He loves that kind of adulation.”