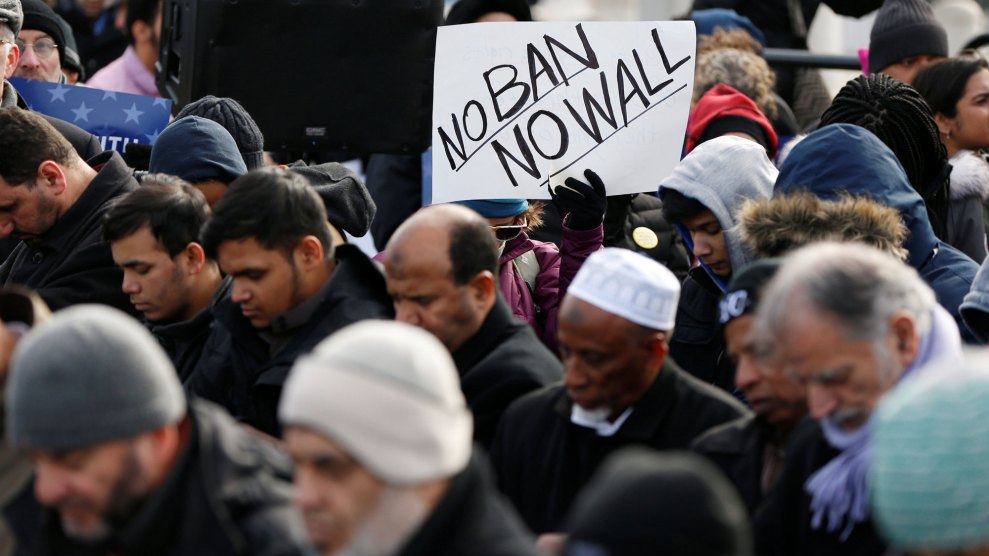 By Dan Levine and Scott Malone

The judge’s temporary restraining order represents a major challenge to Trump’s action, although his administration could still appeal the ruling and have the policy upheld.

Judge James Robart, a George W. Bush appointee, made his ruling effective immediately on Friday, suggesting that travel restrictions could be lifted straight away. He is expected to issue a full written ruling over the weekend.

Washington Governor Jay Inslee celebrated the decision as a victory for the state, adding: “no person – not even the president – is above the law.”

The state’s attorney general, Bob Ferguson, said: “This decision shuts down the executive order right now.” He said he expected the federal government to honor the ruling.

The Justice Department made no immediate decision on an appeal. “The Department looks forward to reviewing the court’s written order and will determine next steps,” it said in a statement.

The new Republican president’s order signed on Jan. 27 triggered chaos at U.S. airports last weekend. Some travelers abroad were turned back from flights into the United States, crowds of hundreds of people packed into arrival areas to protest and legal objections were filed across the country.

The challenge in Seattle court was brought by the state of Washington and later joined by the state of Minnesota. The judge ruled that the states have legal standing to sue, which could help Democratic attorneys general take on Trump in court on issues beyond immigration.

Washington’s case was based on claims that the state had suffered harm from the ban, for example students and faculty at state-funded universities being stranded overseas.

Judge Robart probed a Justice Department lawyer on the “litany of harms” suffered by Washington state’s universities, and also questioned the administration’s use of the Sept. 11, 2001 attacks on the United States as a justification for the ban.

Robart said no attacks had been carried out on U.S. soil by individuals from the seven countries affected by the travel ban since that assault. For Trump’s order to be constitutional, Robart said, it had to be “based in fact, as opposed to fiction.”

The judge’s decision was welcomed by groups protesting the ban.

“This order demonstrates that federal judges throughout the country are seeing the serious constitutional problems with this order,” said Nicholas Espiritu, a staff attorney at the National Immigration Law Center.

Eric Ferrero, Amnesty International USA spokesman, lauded the short-term relief provided by the order but added: “Congress must step in and block this unlawful ban for good.”

The decision came on a day that attorneys from four states were in courts challenging Trump’s executive order. The Trump administration justified the action on national security grounds, but opponents labeled it an unconstitutional order targeting people based on religious beliefs.

Earlier on Friday, a federal judge in Boston declined to extend a temporary restraining order that allowed some immigrants into the United States from countries affected by Trump’s three-month ban.

The State Department said on Friday that fewer than 60,000 visas previously issued to citizens of Iran, Iraq, Libya, Somalia, Sudan, Syria and Yemen had been invalidated as a result of the order. That disclosure followed media reports that government lawyers were citing a figure of 100,000.

U.S. District Judge Leonie Brinkema in Alexandria, Virginia ordered the federal government to give the state a list by Thursday of “all persons who have been denied entry to or removed from the United States.”

The state of Hawaii on Friday also filed a lawsuit alleging that the order is unconstitutional and asking the court to block the order across the country.

Trump’s directive also temporarily stopped the entry of all refugees into the country and indefinitely halted the settlement of Syrian refugees.

On Friday the Department of Homeland Security issued additional clarification of the order, stating that there were no plans to extend it beyond the seven countries. The DHS also reiterated that the ban did not apply to permanent residents, or green card holders, and some others, such as those who have helped the U.S. military.