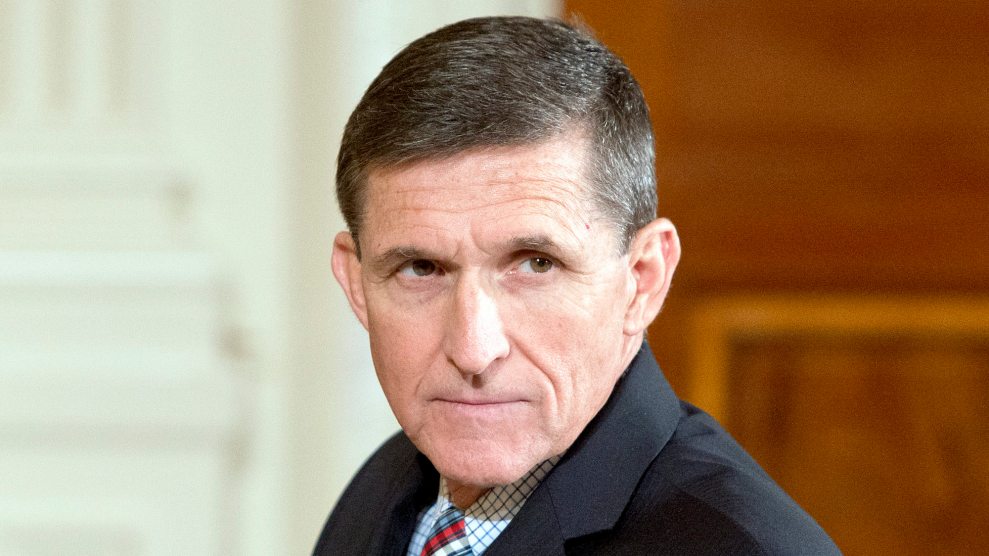 With Michael Flynn’s resignation, the Flynn story is not done—and neither is the need for an investigation of Flynn and his contacts with Russia.

Late on Monday night, Flynn, President Donald Trump’s combative and controversial national security adviser, quit his post, after days of incoming fire following a Washington Post report that he had lied about his December contacts with Russian Ambassador Sergei Kislyak. After news of his conversations with the Russian broke last month, Flynn insisted that they had not discussed the sanctions imposed on Moscow by President Barack Obama as punishment for the operation ordered by Vladimir Putin to influence the 2016 election and help Trump. And Flynn had apparently made this claim to Vice President Mike Pence, who days before the inauguration publicly asserted Flynn’s communications with Kislyak were innocent. (A widespread assumption was that Flynn had privately indicated to the Russian ambassador that the Trump administration would dial back the sanctions.)

But Flynn had pulled a dumb move, because, as he should have known, US intelligence was intercepting the communications of Kislyak, and transcripts of their chats indicated Flynn and the Russian had indeed talked about the sanctions. And these transcripts were shared among various US government agencies. Before Trump fired acting Attorney General Sally Yates for not enforcing his Muslim travel ban, last month she warned the Trump White House that Flynn had misrepresented the calls and was therefore vulnerable to Russian blackmail. That warning was enough reason for Trump to boot Flynn, but he did not. It took the increasing criticism of Flynn and the mounting calls for an investigation of recent days for the White House to request that Flynn find another perch for his anti-Islam crusade.

Flynn’s departure should not end the demands for an investigation. One tantalizing and somewhat overlooked aspect of the Post story that did him in was the fact that Flynn hobnobbed with Kislyak during the campaign. The paper reported that the Flynn-Kislyak conversations “were part of a series of contacts between Flynn and Kislyak that began before the November 8 election and continued during the transition, officials said.” And the paper noted, “Kislyak said that he had been in contact with Flynn since before the election, but declined to answer questions about the subjects they discussed.”

This is the mystery that now needs an answer: What was Flynn talking about with the Russians during the campaign?

In January, Pence declared that the Trump campaign had no interactions with Moscow. On Face the Nation, host John Dickerson asked him, “Did any adviser or anybody in the Trump campaign have any contact with the Russians who were trying to meddle in the election?” Pence was unequivocal: “Of course not. And I think to suggest that is to give credence to some of these bizarre rumors that have swirled around the candidacy.”

Then consider credence granted, for now there is evidence that Trump’s senior campaign adviser on national security was in regular contact with Putin’s man in Washington. Flynn’s pre-election interactions with Kislyak occurred while Moscow was attacking American democracy with its secret operation to subvert the election via hacking and leaking (and more) to boost Trump’s prospects. And Flynn knew about this—because US intelligence told the Trump campaign about Russia’s meddling in the summer, months before it publicly declared that Moscow had hacked the campaign.

When the news first emerged in June that the Democratic National Committee had been cyber-penetrated, private cyber experts immediately concluded that Russian intelligence was the culprit. Trump and his campaign, though, refused to acknowledge that. But on August 17, Trump, as the GOP presidential nominee, began receiving briefings from the US intelligence committee. And the material presented to him included the intelligence community’s assessment that Russia was meddling in the US election. Flynn was with Trump for this briefing. So whatever was being reported in the media, as of mid-August, Flynn knew that US intelligence believed Moscow was trying to undermine the election. And on October 7, the Office of the Director of National Intelligence and the Department of Homeland Security issued a statement publicly announcing this conclusion.

This means that during the campaign, Flynn, a high-ranking Trump aide, was knowingly talking with a senior official of a regime that was trying to undermine the election to benefit Trump. So what did they chat about? Did Flynn warn Kislyak not to mess with US democracy? Or did he give the Russians reasons to prefer Trump over Hillary Clinton and, consequently, more motivation for their covert efforts to nudge the election toward Trump?

What Flynn told Kislyak during the campaign could be much more important than their discussions about the sanctions prior to the inauguration. There is a possibility that Flynn, acting on behalf of the Trump campaign, signaled to Putin that his decision to assist Trump was on the money. Of course, there are even darker possibilities of more direct collusion.

Flynn cannot be allowed to fade away to some consulting or lobbying job (or Fox News post). The Senate and House intelligence committees are currently investigating the Russian hacking and contacts between the Trump campaign and Russia. Flynn should be at the top of the to-do list of the committees’ gumshoes. But other committees in Congress—the foreign relations panels, the government oversight committees—should also focus on Flynn’s interactions with Moscow. And if the FBI is still on this beat—it’s unclear what sort of investigation the bureau is running related to the 2016 election—its agents ought to zero in on Flynn’s contacts with the Putin regime throughout the election. (Flynn in December 2015 was paid to attend a gala in Moscow thrown by RT, the Russian state-funded television network, and sat at a table with Putin.)

Flynn, who developed a reputation for pushing his own alternative facts when he ran the Defense Intelligence Agency, has vacated one of the most important and sensitive positions in the US government. But Americans still deserve to know more about what Flynn, a representative of the Trump campaign, was doing with the Russians before Election Day.