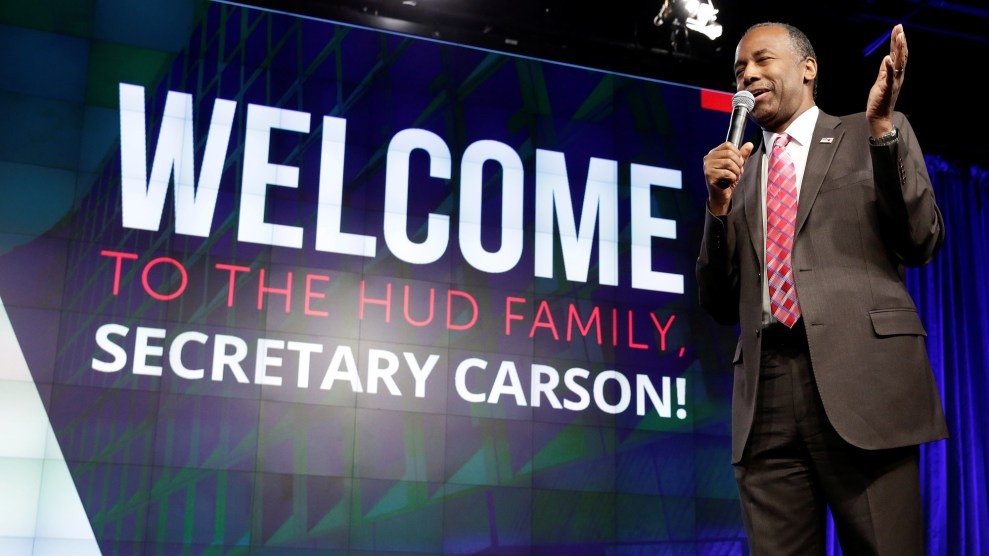 Secretary of Housing and Urban Development Ben Carson speaks to employees of the agency on March 6.Joshua Roberts/Reuters/ZUMA Press

President Donald Trump on Thursday unveiled a budget proposal that would cut $18 billion in domestic spending in order to bolster military funding. And poor Americans, particularly those in need of subsidized housing, are likely to feel the brunt of it.

The budget blueprint calls for cutting the Department of Housing and Urban Development budget by $6.2 billion, or 13.2 percent, in the next fiscal year. That would severely impact the agency’s efforts to assist 4.5 million low-income households. The 53-page proposal is what’s known as a “skinny budget,” outlining the president’s spending priorities. A more detailed version is expected to be released in May.

Housing advocates expressed shock and disappointment at how deep the cuts were. Diane Yentel, president of the National Low Income Housing Coalition, said the proposed cuts were “unconscionable and unacceptable” and would result in the most severe reduction in the HUD budget since the early 1980s. Together with spending cuts this fiscal year, the cuts to HUD could amount to $7.5 billion. “President Trump seems eager to follow in Mr. Reagan’s footsteps, repeating his mistakes and working to make America homeless again,” Yentel said in a statement. The Coalition estimated that the cuts could lead to 123,786 fewer jobs supported by HUD.

The damage inflicted by the cuts to HUD would not be restricted to low-income city-dwelling Americans, but would also affect those in rural communities and small towns who backed Trump in the election. “If you combine that proposed defunding with what Trump has often said about how he’s committed to revitalizing poor minority communities, there would appear to be some contradiction,” says Barbara Sard, vice president of housing policy at the Center on Budget and Policy Priorities. (As a real estate developer, Trump was once sued by the Justice Department for discriminating against prospective black apartment renters.)

Here’s what we know about cuts to the HUD budget so far:

Community Development Block Grant program: The program, which allows states to apply for federal funding for local projects ranging from infrastructure improvements to housing assistance, would see its $3 billion budget eliminated outright in fiscal year 2018. The budget blueprint states that the program, which began in 1974 and already had its budget cut by $1.4 billion between 2001 and 2016, “is not well-targeted to the poorest populations and has not demonstrated results.”

Vicki Watson, executive director of the National Community Development Association, a nonprofit that works with local governments to administer federally supported programs, insists that isn’t the case. More than 1,200 communities, from states to local governments, receive annual funding allocations through the program. More than 95 percent of the block grant money goes to low-income communities, Watson says.

“The program has very deep roots,” she says. “Virtually every congressional district receives or has access to the money. Once they start hearing from their constituents, there’s no way that program can be eliminated because it does so much in communities.”

Housing assistance programs: The administration aims to cut more than $1.1 billion from the HOME, Choice Neighborhoods, and Self-help Homeownership Opportunity programs, all aimed at promoting affordable housing and neighborhood improvement efforts in cities across the country.

The HOME program, which began in 1990, provides block grants to communities to create affordable housing for low-income households—the largest such program administered by HUD. The Choice Neighborhoods program, started in 2010 under President Barack Obama, provides grants to cities to redevelop distressed housing projects and help turn surrounding neighborhoods into mixed-income communities. And the Self-help Homeownership Opportunity Program, which launched in 1996, funds nonprofits that assist low-income families in building their own homes.

The budget would also eliminate the US Interagency Council on Homelessness, a division that helps coordinate among 19 federal agencies on efforts to address homelessness at the local level.

Rental assistance: The budget blueprint states that HUD would receive $35 billion toward rental assistance, without specifying to what extent that figure represents a funding reduction. But the Washington Post reports that, based on a preliminary budget documents, rental assistance programs could be cut by at least $300 million. The Center on Budget and Policy Priorities estimates that such a reduction would result in the loss of funding for 200,000 vouchers, leaving thousands of poor Americans without aid to pay for housing.

“We’re now in a place where there are very few dollars in the HUD budget that fund anything new,” says Sard. “The large majority of funds in the HUD budget go just to maintain the existing rental assistance unit. So if you cut the number of vouchers available, families are going to lose their homes. Some of those will become homeless. People won’t be able to get out of homeless shelters and into housing. So it’s going to have reverberating effects.”

Some populations could feel a particular sting from cuts to rental assistance. The Post reports that preliminary budget documents specified cuts to housing assistance for the elderly, people with disabilities, and Native Americans in public housing.

Housing authorities had already been bracing for funding reductions. The New York City Housing Authority, which manages more public housing than any other agency in the country, depends on $2 billion of its annual operating budget from HUD. It received notice from HUD last month to expect $75.8 million in federal funding cuts.

Shola Olatoye, the agency’s chief, said at a local budget hearing on Monday that the proposed cuts would result in a $14 million deficit for the agency. City Councilman Ritchie Torres told colleagues at the hearing that Trump’s presidency posed “the gravest threat to public housing” in the agency’s 82-year history.