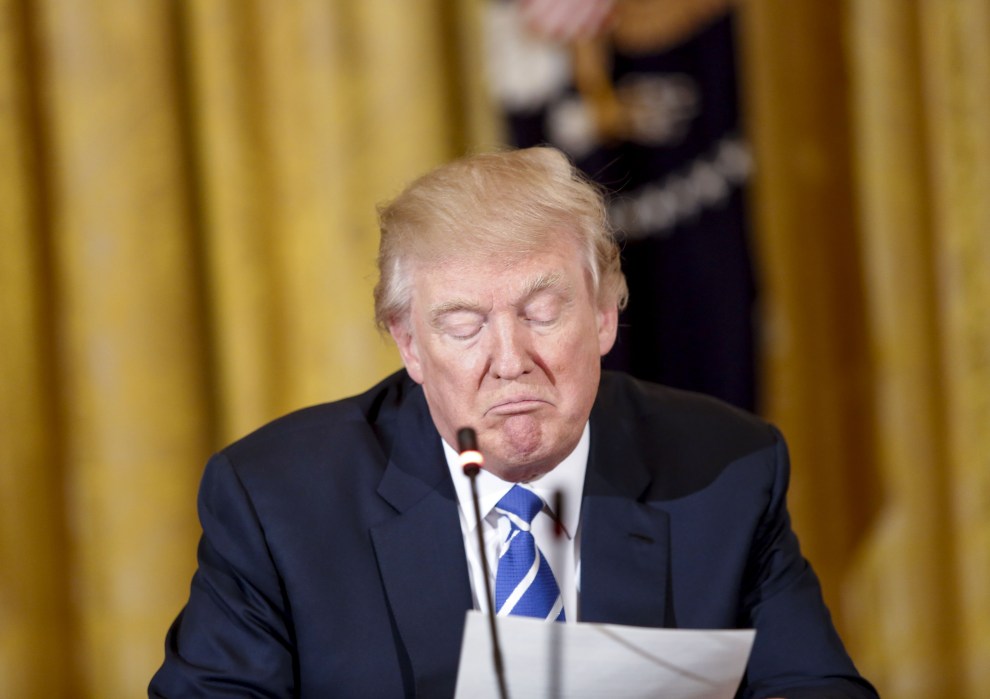 A Trump campaign aide who argues that Democrats committed “ethnic cleansing” in a plot to “liquidate” the white working class. A former reality show contestant whose study of societal collapse inspired him to invent a bow-and-arrow-cum-survivalist multi-tool. A pair of health care industry lobbyists. A lobbyist for defense contractors. An “evangelist” and lobbyist for Palantir, the Silicon Valley company with close ties to intelligence agencies. And a New Hampshire Trump supporter who has only recently graduated from high school.

These are some of the people the Trump administration has hired for positions across the federal government, according to documents received by ProPublica through public-records requests.

While President Donald Trump has not moved to fill many jobs that require Senate confirmation, he has quietly installed hundreds of officials to serve as his eyes and ears at every major federal agency, from the Pentagon to the Department of Interior.

Unlike appointees exposed to the scrutiny of the Senate, members of these so-called “beachhead teams” have operated largely in the shadows, with the White House declining to publicly reveal their identities.

While some names have previously dribbled out in the press, we are publishing a list of more than 400 hires, providing the most complete accounting so far of who Trump has brought into the federal government.

The White House said in January that around 520 staffers were being hired for the beachhead teams.

The list we obtained includes obscure campaign staffers, contributors to Breitbart, and others who have embraced conspiracy theories, as well as dozens of Washington insiders who could be reasonably characterized as part of the “swamp” Trump pledged to drain.

The list is striking for how many former lobbyists it contains: We found at least 36, spanning industries from health insurance and pharmaceuticals to construction, energy, and finance. Many of them lobbied in the same areas that are regulated by the agencies they have now joined.

That figure is almost certainly an undercount since we only included those who formally registered as lobbyists, a process increasingly avoided by many in Washington.

During the campaign, Trump said he would have “no problem” banning lobbyists from his administration. But they have nonetheless ended up in senior roles, aided by Trump’s weakening of Obama-era ethics rules that modestly limited lobbyists’ role in government.

The White House didn’t respond to requests for comment.

There are many former congressional staffers, several top officials from the George W. Bush administration, and even a handful of holdovers from the Obama administration. The list also includes at least eight staffers drawn from the Heritage Foundation, a conservative think tank that forged close ties to the new administration during the transition.

Much about the role of the beachhead teams at various federal agencies is unclear. But close observers of the early weeks of the Trump administration believe they have taken on considerable influence in the absence of high-level political appointees.

“If the public and Senate is in the dark about a team created without a Senate confirmation process, no one will be permitted to shed light on who is hopelessly conflicted or who is obviously unqualified—and who is both,” said Jeff Hauser, director of the Revolving Door Project at the Center for Economic and Policy Research.

The beachhead team members are temporary employees serving for stints of four to eight months, but many are expected to move into permanent jobs. The Trump administration’s model is based on plans developed but never used by the unsuccessful presidential campaign of Mitt Romney.

“The beachhead teams involve people with considerable authority over the federal government,” said Max Stier, the CEO of the Partnership for Public Service, a nonpartisan group that advises presidential candidates on smooth transitions. “We need clarity about what they’re doing and what their role is going to be.”

The Obama administration also hired temporary staffers after the inauguration. But Trump has brought in many more, Stier said.

The new list of names was provided to us by the Office of Personnel Management, the government’s human resources agency. We received additional names from other federal agencies in response to Freedom of Information Act requests. At least a few people on the list have changed agencies or left the administration, including, for example, the young Department of Housing and Urban Development staffer who was fired after his anti-Trump writings during the campaign came to light.

Here is a rundown of some of the Trump hires.

Curtis Ellis was a columnist for WorldNetDaily, a website best known for its enthusiastic embrace of the false notion that President Barack Obama was born outside the United States. A column headlined the “The Radical Left’s Ethnic Cleansing of America” won Ellis an admiring interview with Steve Bannon, now Trump’s top aide. He is a longtime critic of trade deals such as the Trans-Pacific Partnership.

Ellis was hired January 20 as a special assistant to the secretary at the Labor Department. Asked about his role in a brief phone interview Tuesday, he said, “Nothing I can tell you.”

Jon Perdue, a self-described guerrilla warfare expert and fellow at a little-known security think tank, wrote a book called The War of All the People: The Nexus of Latin American Radicalism and Middle Eastern Terrorism. He is also a onetime contributor to Breitbart.

Perdue was featured on CNBC’s reality series Make Me a Millionaire Inventor for his invention, the Packbow, which Perdue came up with while studying “collapsed societies, and what people who lived in those societies came up with to either defend themselves or to survive.” It’s a bow and arrow that doubles as a compass, tent pole, walking stick, spearfishing rig, and water purification tablet receptacle.

Perdue was hired as a special assistant at the Treasury Department. The agency didn’t immediately respond to a request for comment.

John Jaggers ran the Trump campaign in Maryland and Virginia, where he made headlines for endorsing the conspiracy theory that Hillary Clinton was “very, very sick and they’re covering it up.” As he put it last August, “The woman who seeks to be the first female president of the United States wears a wool coat at every single thing. Have you ever stopped to wonder why? It’s a big deal, folks.”

Jaggers was hired January 20 as a senior adviser at the General Services Administration, which oversees tens of billions of dollars of government procurement every year. But records show he left the job on March 3. He declined to comment.

Alexandra Campau, hired at the Department of Health and Human Services, was formerly a lobbyist in Washington for the law firm Cozen O’Connor. According to disclosure records, her firm’s clients included a licensee of insurance giant Blue Cross Blue Shieldand Fresenius Medical Care, a German company that specializes in medical supplies for renal dialysis.

Timothy Clark, a senior adviser to HHS Secretary Tom Price, ran his own political consulting firm in California. His past clients included PhRMA, the powerful trade group that represents the pharmaceutical industry.

Keagan Lenihan, also a senior adviser to Price, was a director of government relations at McKesson Specialty Health, a firm that supports independent health providers. Disclosure records show Lenihan directly lobbied HHS. For Lenihan, the new post represents a return trip through the revolving door between government and the private sector, and a reunion with an old boss. Before registering as a lobbyist, she was a senior legislative assistant for Price, when the now-HHS secretary was in Congress.

Asked about the three HHS staffers, an agency spokeswoman said, “We are not confirming or commenting on personnel at this time.”

Justin Mikolay, hired at the Department of Defense, was previously a registered lobbyist for Palantir. His title at the tech firm was “evangelist.” Mikolay lobbied for the “procurement/deployment of the Palantir Government software platform” throughout intelligence and defense agencies, according to disclosure records.

Chad Wolf, a Bush-era Transportation Security Administration official turned lobbyist, is currently serving as an adviser to the TSA at the Department of Homeland Security. His clients have included defense and homeland security contractors.

As we’ve previously reported, lobbyists for the construction industry trade association and financial services firm TransAmerica are on the team at the Department of Labor.

The list also includes what appear to be dozens of former Trump campaign staffers, including several who graduated from college last year. One, Danny Tiso at the Department of Labor, graduated from high school in 2015, according to his LinkedIn profile. He worked for the Trump campaign in New Hampshire.

Seth Harris, who was on the first Obama-Biden transition team and later became a top Labor Department official, said it’s not uncommon to bring in campaign staff to agencies—”as long as there are senior political people to direct the junior people.”

“This is how you incorporate the people who are your strongest supporters into the government,”he said. “There are plenty of junior jobs in the government that these people can do—public-affairs jobs, special assistant jobs.”