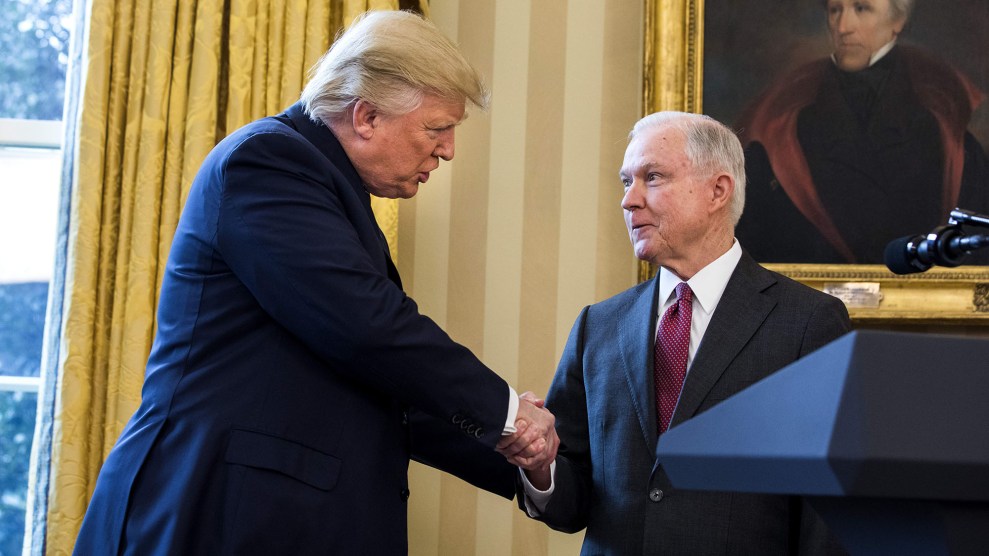 Congressional Republicans are coming around to the idea that the Trump administration’s ties to Russia need to be investigated by someone other than Attorney General Jeff Sessions, following a Washington Post report that Sessions lied during his confirmation hearing about interactions with the Russian government. When Sessions testified before the Senate last month, he said he “did not have communications with the Russians” during the presidential campaign. In fact, the Post reported Wednesday night, he met twice with Russian Ambassador Sergey Kislyak, once last September in a private meeting in Sessions’ Senate office.

A trickle of Republicans are now saying that Sessions should no longer have a role in any investigation into improper contacts between Trump’s staff and Russian state actors during last year’s campaign.

Rep. Jason Chaffetz (R-Utah), chair of the House Oversight Committee, called on Sessions to clarify his contacts with Russia and step aside from the investigation:

AG Sessions should clarify his testimony and recuse himself

AG Sessions must recuse himself from the Russia investigation.

Sen. Rob Portman (R-Ohio) sent out a statement Thursday morning saying Sessions needs to step aside. “Jeff Sessions is a former colleague and friend, but I think it would be best for him and for the country to recuse himself from the DOJ Russia probe,” Portman’s statement said. Rep. Martha McSally (R-Ariz.), Rep. Patrick Meehan (R-Pa.), Rep. Leonard Lance (R-N.J.), and Rep. Raul Labrador (R-Idaho) have also said Sessions should recuse himself. Sen. Jeff Flake (R-Ariz.) stopped just short of calling on Sessions to step aside. “Obviously he is going to need to clarify,” Flake told Reuters, “and likely recuse himself from any investigation with regard to the Russians.”

House Majority Leader Kevin McCarthy (R-Calif.) briefly joined the calls for recusal when he said it would be “easier” if Sessions removed himself. But he quickly walked that back Thursday morning, going on Fox to say, “I’m not calling on him to recuse himself.”

Sen. Lindsey Graham (R-S.C.) told Mother Jones on Thursday that he thinks Sessions would need to recuse himself if allegations of improper contacts between the Trump campaign and Russia are borne out. “You got an attorney general who is my dear friend, who is closely involved with the presidential campaign,” Graham told Mother Jones. “If there’s credibility to the allegations of inappropriate contacts between a foreign government and the campaign, in my view, for the good of the integrity of the system, somebody should pursue that—not Jeff Sessions.”

.@SenatorCollins, who introduced & vouched for Sessions at his confirmation hearing, calls for him to recuse himself & “clarify” comments. pic.twitter.com/tI23d15K8Y

This story is being updated as more Republicans announce their views on Sessions.