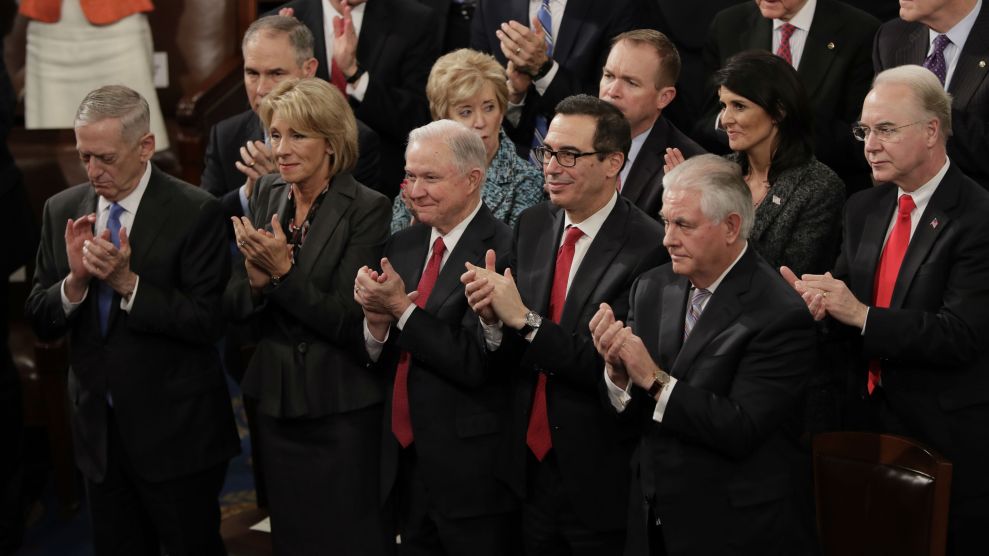 As most of the world knows by now, Attorney General Jeff Sessions did not tell the truth when he was asked during his confirmation hearings about contacts with Russian officials.

But Sessions isn’t the only one. At least four other cabinet members made statements during their nomination hearings that are contradicted by actual facts: EPA Chief Scott Pruitt, Education Secretary Betsy DeVos, Treasury Secretary Steve Mnuchin, and Health and Human Services Secretary Tom Price.

The statements were all made under oath, except those of DeVos. It is a crime to “knowingly” lie in testimony to Congress, but it’s rarely prosecuted.

If you know of instances that we’ve missed, email us.

The falsehood: Pruitt stated in testimony that he had never used a private email account to conduct business while he was Oklahoma’s attorney general.

The truth: Fox News 25 asked the state Attorney General’s office whether Pruitt had used a personal email. The answer was yes.

The falsehood: DeVos said during her confirmation hearings that she has not been involved in her family’s foundation, which has given millions of dollars to group that oppose LGBT rights.

The truth: As The Intercept has detailed, tax filings have listed DeVos as vice president of the foundation’s board for 17 years.

DeVos’ response: She said the foundation’s nearly two decades of filings were the result of a “clerical error.”

The falsehood: In written testimony, Mnuchin denied that his former bank had used so-called “robo-signing” to improperly foreclose on homeowners. “OneWest Bank did not ‘robo-sign’ documents,” Mnuchin wrote.

The truth: As the Columbus Dispatch detailed, OneWest Bank employees frequently signed documents in bulk without proper review, which is what robo-signing is. One employee testified that she typically signed about 750 foreclosure documents per week. The Dispatch noted that a judge stopped three OneWest Bank foreclosures “specifically based on inaccurate robo-signings.” Reuters also detailed the bank’s robo-signing back in 2011.

Mnuchin’s response: A spokesman offered the following statement after the Dispatch‘s story: “The media is picking on a hard-working bank employee whose reputation has been maligned but whose work has been upheld by numerous courts all around the country in the face of scurrilous and false allegations.”

The falsehood: During his confirmation hearings, Price insisted that the discount he got on a biotech stock was “available to every single individual that was an investor at the time.”

The truth: As the Wall Street Journal reported, fewer than 20 investors in the U.S. were offered the discount, including Price.

Price’s response: Price did not respond to the Journal’s story.

The falsehood: Sen. Al Franken, D-Minn., asked Sessions whether “anyone affiliated with the Trump campaign communicated with the Russian government in the course of this campaign.”

Session responded: “Sen. Franken, I’m not aware of any of those activities. I have been called a surrogate at a time or two in that campaign and I did not have communications with the Russians.”

Sessions’ response: His office’s first statement: “I never met with any Russian officials to discuss issues of the campaign. I have no idea what this allegation is about. It is false.”

An anonymous White House official gave a New York Times reporter a different take, saying Sessions and the ambassador did talk and “had superficial comments about election-related news.”

Sessions’ spokeswoman later said Sessions often spoke with “foreign ambassadors as a senior member of the Armed Services Committee.” Washington Post reporters asked all 26 members of the committee if they spoke to the Russian ambassador in 2016. Sessions was the only one.