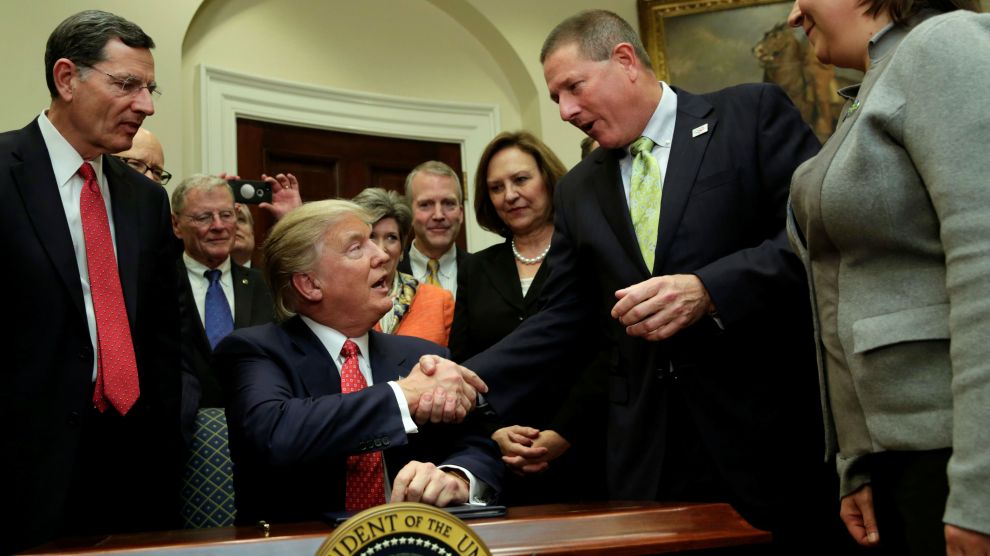 For nearly eight years, the Obama administration regularly released the names of visitors to the White House and the adjoining executive branch office buildings, along with the dates of their visits and the names of the officials who hosted them. The visitor logs provided a rare glimpse of the comings and goings of the most powerful office in the world.

The Obama administration was the first to voluntarily release data on White House visitors. The practice by President Barack Obama had its flaws: Administration officials typically waited 90 to 120 days to release the logs, and they had wide latitude to withhold certain names from the visitor logs that they deemed politically or personally sensitive, including friends of the first family and potential nominees undergoing vetting. What’s more, there was no transparency into how Obama officials came to decide which names to withhold and which to include.

Nonetheless, the logs gave the public a useful view into how the White House conducted business and with whom it was conducting that business. “Americans may not realize how many people are in and out of the White House complex every day,” says John Wonderlich, executive director of the Sunlight Foundation, which supports greater transparency in government. “There are a lot of meetings in the West Wing or in the connected official buildings as part of the White House complex where people are setting the agenda and working with and lobbying the administration. The visitor logs, even though they’re flawed, provided a meaningful window into understanding what was happening at the White House.”

Transparency about who visits the White House could be especially important for the Trump administration, which has taken a dim view of federal ethics laws and compliance. Trump has refused to divest from his global business holdings. His administration skipped the ethics portion of a training course for senior staff. And Trump’s freewheeling interactions with dues-paying guests at Mar-a-Lago, his private club in south Florida, have raised questions about access-peddling. (This weekend, Attorney General Jeff Sessions reportedly greeted guests at Mar-a-Lago.)

Since Trump’s election, his transition team and then his administration have remained mum on the fate of the visitor logs initiative. The website where the Obama administration published the logs is blank except for a brief message: “This page is being updated. It will post records of White House visitors on an ongoing basis, once they become available.” And the data released by the Obama White House to power the online visitors log is no longer searchable but can be found via the National Archives.

Under Obama, media outlets made ample use of the White House visitor logs. We drew on them often here at Mother Jones. So did the New York Times and the Wall Street Journal. So, too, did one of Trump’s favorite outlets, Breitbart News, which published numerous stories referencing the logs.

Eight Democratic senators on Monday sent letters to Trump and the Secret Service questioning whether the new administration would continue the practice of releasing visitor logs. They also urged Trump and the Secret Service to extend the visitor logs disclosure to include Mar-a-Lago, where Trump has spent considerable time as president and which he calls his “winter White House.”

“We see no reason why you would be unable to continue policies of your predecessor,” the letter reads. “And we urge you to extend those policies to address your decision to regularly conduct official business at private properties that also provide access to certain members of the public.” Sens. Sheldon Whitehouse (D-R.I.), Ron Wyden (D-Ore.), Jack Reed (D-R.I.), Tom Carper (D-Del.), Tom Udall (D-N.M.), Kirsten Gillibrand (D-N.Y.), Richard Blumenthal (D-Conn.), and Chris Van Hollen (D-Md.) signed the letter. They asked for a response by March 15.