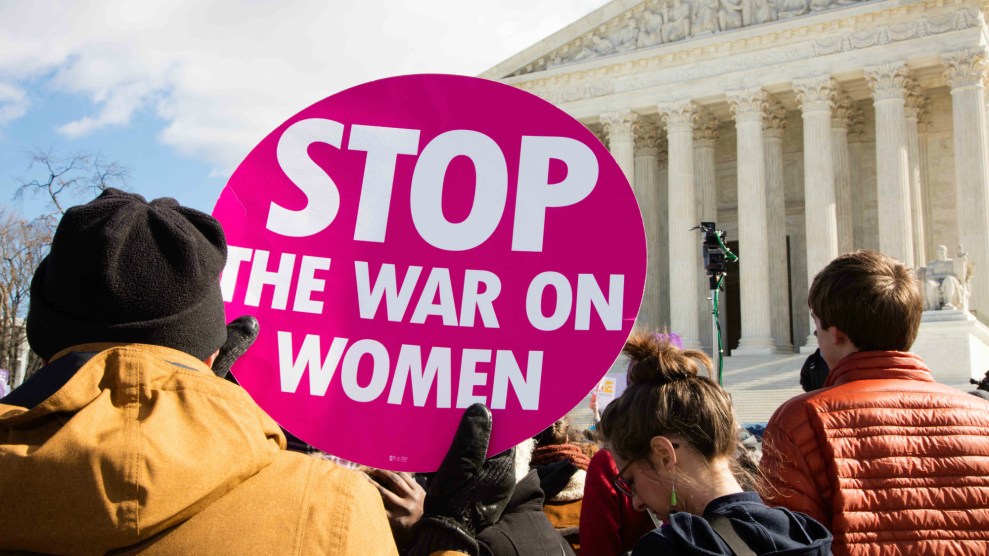 At the beginning of 2017, reproductive rights advocates feared that the election of President Donald Trump and the Republican sweep in many statehouses would embolden anti-abortion legislators at the state level. By mid-January, four states had already introduced late-term abortion bans, while others—Missouri, for instance—had filed a significant number of anti-abortion-related legislation ahead of this year’s legislative session. As the first quarter of the year comes to a close, a new report released this week by the Guttmacher Institute, a reproductive rights research and advocacy think tank, finds that the policies introduced so far this year paint a more complicated picture.

The institute’s report finds that state legislatures across the country have introduced some 1,053 reproductive-health-related provisions since January, and that of those proposed measures, 431 would restrict access to abortion services, while 405 would expand access to reproductive health services—the report does not categorize the remaining measures.

Five states—Kentucky, Wyoming, Arizona, Arkansas, and Utah—have already passed at least one abortion restriction this year—with a total of 10 new restrictions becoming laws. In Kentucky, a ban on abortions 20 weeks post-fertilization was signed by Republican Gov. Matt Bevin after a sprint through the state Legislature. Utah now requires doctors to tell women that medication abortions can be “reversed”* after the first dose in the two-dose protocol, a claim that, as with many abortion counseling requirements in other states, is not supported by evidence. Arizona became one of the first states in the country to detail specific requirements for how doctors must work to preserve the life of the fetus after an abortion procedure, a law that some critics have challenged for possibly prolonging the pain of nonviable fetuses.

“There is this competition to the bottom that has been happening with state legislatures and abortion over the past six years,” says Elizabeth Nash, the state issues manager for the Guttmacher Institute and the lead author on the report. But in 2017, she adds “the scale has changed.” She explained that compared with the same period from 2011 to 2016, “we haven’t been seeing as much activity on abortion as we have seen.” Rather than suggesting a diminished interest in abortion restrictions, Nash explains that given the onslaught of new abortion restrictions in the past six years, some states might simply be running out of measures to introduce. But beyond that, health care reform, state budgets, and the opioid crisis might have caused conservative state legislatures to focus their attention elsewhere at the beginning of their legislative sessions, suggesting that anti-abortion activity might pick up later in the year.

As a result of this reduced activity, Nash says, “we have been seeing less in the way of trends” when looking at the types of abortion restrictions introduced in 2017. There are still some commonalities among the various restrictions introduced in the states, particularly concerning “abortion bans” that prohibit abortions being sought for certain reasons—such as a genetic anomaly or the sex of the fetus—or after a specific point in the pregnancy.

In 28 states, legislators have introduced some 88 measures that would either ban abortion completely or prohibit it in specific circumstances. In Arkansas, for example, a law was recently passed that bars doctors from using a common second trimester abortion procedure known as “dilation and evacuation.” Similar restrictions have passed at least one chamber in Pennsylvania, South Carolina, and Texas. The “20-week abortion ban” was passed in Kentucky and has cleared at least one legislative chamber in Iowa, Montana, and Pennsylvania. Six-week abortion bans, also known as “heartbeat bills,” are also being introduced in several states, possibly in response to Ohio legislators successfully presenting a version to Gov. John Kasich last year; he vetoed the bill but signed a 20-week abortion ban into law.

Nash notes that some of the legislative support of abortion bans may be motivated by an interest in getting a case before the Supreme Court in the next few years. “They are thinking about being the state that overturns Roe v. Wade and the way to do that is to adopt something like a 6-week abortion ban or a 20-week abortion ban and then send that up through the courts,” she says.

The Guttmacher report notes that abortion restrictions continue to be introduced at a relatively steady, if somewhat lessened, rate, but proactive reproductive health legislation has seen an increase, with 21 states and the District of Columbia considering measures that would expand reproductive health services. “The number of proactive measures grew from 221 in 2015 and 353 in 2016” to 405 in 2017, the report notes. The report suggests that this development is likely “in anticipation of the possible dismantling of the Affordable Care Act and loss of its contraceptive coverage guarantee.” So far Virginia is the only state to enact a proactive measure; the state will now require that insurance plans covering contraceptives allow enrollees to receive a year’s supply at once.

Proactive legislation on the state level is likely to become increasingly important as the Republican-controlled Congress and other conservative-led legislatures continue to use funding to target reproductive services providers such as Planned Parenthood. Last week, Trump signed into law a measure allowing states to withhold public funds used for family planning—also known as Title X funding—marked for contraception and other nonabortion services from groups that also provide abortions. The move nullifies an Obama-era rule protecting Planned Parenthood and other groups from losing federal family-planning funds.