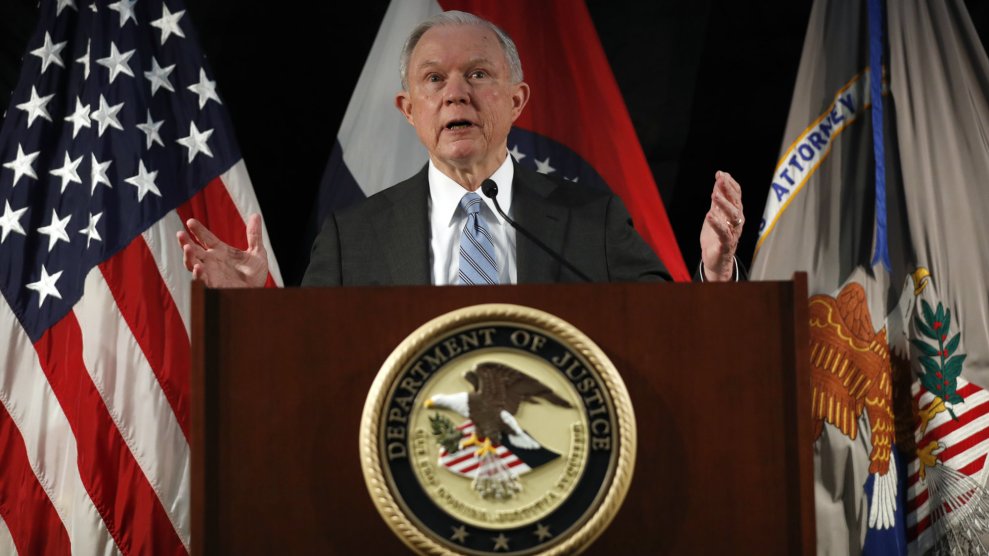 Attorney General Jeff Sessions on Monday ordered a review of all reform agreements between the Department of Justice and police departments nationwide, such as a recent consent decree entered to overhaul the troubled Baltimore Police Department. In a memo to DOJ staff, Sessions wrote that “it is not the responsibility of the federal government to manage non-federal law enforcement agencies.” The review—which will be led by Sessions’ two top deputies—was ordered as part of a broader assessment of all DOJ activities.

The move alarmed civil rights and police reform advocates. “We have a very serious problem in this country with the relationship between police and the communities they serve,” Jonathan Smith, who oversaw nearly two dozen investigations into police departments as head of the Special Litigation Section of the DOJ’s Civil Rights Division under President Barack Obama, told Mother Jones in a phone interview. Sessions’ memo signals “a retreat from the federal government’s commitment” to ensuring police departments comply with the Constitution, Smith said, adding that widespread misconduct in police departments is “not about bad police officers. It’s about bad systems, lack of accountability, bad policies, and bad practices.”

Under Obama, the Department of Justice opened 25 civil rights investigations into police departments and enforced 14 consent decrees, or agreements with departments that mandate reforms. All of them are all still active. In mid-January, the DOJ announced that it had reached a consent decree with the Baltimore Police Department and an agreement with the Chicago Police Department to pursue a decree just days before Trump’s inauguration. The investigation into CPD—and the negotiation process for BPD’s consent decree—were reportedly rushed to a close due to fear that both would stall under Trump. Sessions criticized the use of consent decrees during his confirmation hearings and has said the DOJ will “pull back” on police oversight efforts under his leadership.

A report released in February by Samuel Walker, a police reform expert at the University of Nebraska in Omaha, determined that most consent decrees enforced by the Department of Justice since 1994—when Congress passed legislation granting the DOJ oversight authority over local police agencies—have been successful in achieving long-term reforms. Consent decrees are binding legal agreements, and once signed, they are overseen by a federal judge and an appointed monitor. The DOJ’s ability to interfere with that process is limited, Smith said.

But there are things the DOJ can do to undermine it. It could ignore violations of decrees and stop taking police departments to court because of them. It could also seek to renegotiate the terms of a decree or to have it dropped altogether—though that would be difficult even with the cooperation of a police department, Smith said. “After all, these injunctions are entered to protect the public interest,” Smith said.

Sessions’ review calls into question whether the DOJ will follow through on enforcing a nascent consent decree with the Baltimore Police Department or enter into a decree with the Chicago Police Department at all. After Sessions sent out the memo calling for the review, DOJ attorneys asked a Maryland judge to delay a court hearing so that it could “review and assess” Baltimore’s consent decree. The city’s mayor and police chief said on Monday that they oppose any delay in the process. Chicago Mayor Rahm Emanuel and the city’s police chief also said in a joint statement yesterday they are committed to following through on the police reforms recommended by the DOJ’s report whether or not the federal government is involved. The DOJ launched investigations into the Baltimore Police Department and Chicago Police Department in 2015 amid outrage over the police-involved deaths of Freddie Gray in Baltimore and Laquan McDonald in Chicago.

Sessions has already suggested that the DOJ will stop opening new civil rights investigations into police departments. And President Donald Trump’s March budget proposal would cut more than $1 billion from the department’s resources. Funding for the department’s Civil Rights Division—which handles police reform work—is not addressed explicitly in the budget outline, but a blueprint drafted by the Heritage Foundation, from which parts of Trump’s budget appear to be lifted, would cut $58 million from the Civil Rights Division, or 33 percent of its current budget.

Trump’s drastic budget cuts would be a “silent killer” of the DOJ’s Civil Rights Division.

Christy Lopez, who also helped to oversee police reform investigations at the DOJ under Obama, said such a drastic budget cut would be a “silent killer” of the Civil Rights Division, including its work on police reform. “At that point it’s not a matter of will. You just don’t have the people” or resources to open new cases or follow up on existing consent decrees, Lopez said. “There were dozens of cases we wanted to do but couldn’t because we didn’t have the staff,” Smith said of his police reform work at the DOJ.

Given the tone Sessions and Trump have set, Smith thinks state attorneys general will now be crucial to ensuring police accountability and should exercise more oversight over their local police departments. “If the federal government is not going to do it, the states in general and other local bodies are critical to this process,” Smith said. States could mimic legislation like that in California, for example, that gives the state attorney general the authority to conduct DOJ-style investigations into local police departments and pursue a consent decree, Smith said. “There are 18,000 law enforcement agencies in the United States. The US Department of Justice is never going to get to those. But an attorney general can really make an enormous difference in their state.”