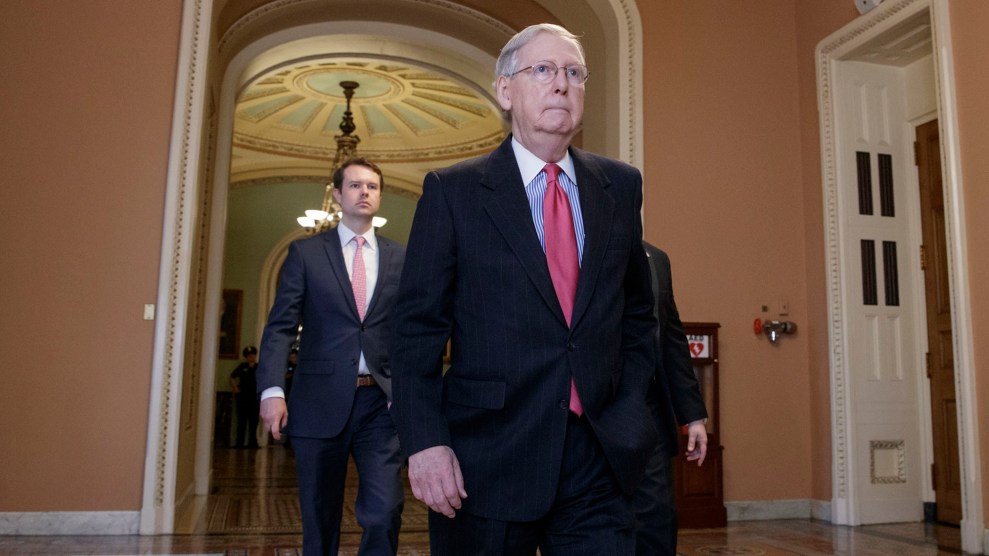 Senate Republicans on Thursday voted to kill the filibuster for Supreme Court nominees, invoking the so-called “nuclear option” so that a minority party will no longer have the ability to block a vote for nominees to the nation’s highest court. The rule change cleared the way for the confirmation of Neil Gorsuch, President Donald Trump’s nominee to fill the empty seat of the late Justice Antonin Scalia. Gorsuch is expected to be officially confirmed Friday.

Over the past two weeks, Democrats coalesced around a strategy of filibustering Gorsuch when all but three Democratic senators announced they would oppose him—even though it was widely believed that Republicans would respond by changing the rules to prohibit filibusters of Supreme Court nominees. The decision was risky because it means Democrats will now have even less leverage if one of the more liberal justices leaves the court while Trump is in the White House.

Democrats’ actions were in part a result of the party’s activist and donor base, which has been pushing lawmakers to resist Trump and his nominee to the fullest extent possible. Democrats want to keep their base energized, not demoralized. But Democrats had other reasons for filibustering, as well. There was the issue of Merrick Garland, President Barack Obama’s nominee to the Supreme Court last year, whom Republicans in the Senate refused to even consider. The Garland episode helped persuade Democrats that temporarily preserving the ability to filibuster would be of little use, since Republicans were already prepared to do whatever it takes to put conservative justices on the court. As a progressive activist explained to Mother Jones, “Any vote that [Senate Majority Leader] Mitch McConnell and Senate Republicans take is really just the icing on the cake—this thing has been cooked since Senate Republicans defied any sense of decorum in their treatment of Barack Obama.”

Democrats were also motivated by deep concerns about Gorsuch’s jurisprudence and his performance during his confirmation process. In his confirmation hearings, Gorsuch was so disinclined to reveal anything about his judicial philosophy that it took considerable cajoling to get him to express an opinion on Brown v. Board of Education, the landmark decision that struck down segregation in public education.

What Democrats could ascertain from Gorsuch’s record suggested that he was an ultra-conservative jurist who would go out of his way to issue broad rulings rather than taking a narrow approach to decisions, including in a case that limited aid for special education children in public schools. In remarks on the Senate floor Thursday, Senate Minority Leader Chuck Schumer (D-N.Y.) suggested that Gorsuch could become the most conservative member of the Supreme Court.

Finally, Democrats were put off by how Gorsuch conducted himself in the meetings he held with senators. Three senators, all women of color, claimed Gorsuch had failed to meet with them after their offices had tried to schedule a meeting.

As Ian Millhiser, a senior fellow at the Center for American Progress, explained to the Washington Post, Gorsuch hurt his chances with Democrats throughout the process: “He mansplained fairly basic concepts to women senators. He pushed way too hard on the ‘I’m not going to express a view about anything, ever’ fallback—much harder than previous nominees. And then, after the Supreme Court unanimously overturned one of his opinions, he defended himself by misrepresenting his own opinion.” On the third day of Gorsuch’s confirmation hearings, the Supreme Court handed down a unanimous opinion overturning Gorsuch’s approach to enforcement of the Individuals with Disabilities Education Act, a piece of Gorsuch’s record that had particularly irked Democrats.

Gorsuch will soon be a Supreme Court justice, but his confirmation will go down as a major moment in the continued breakdown of the US Senate.