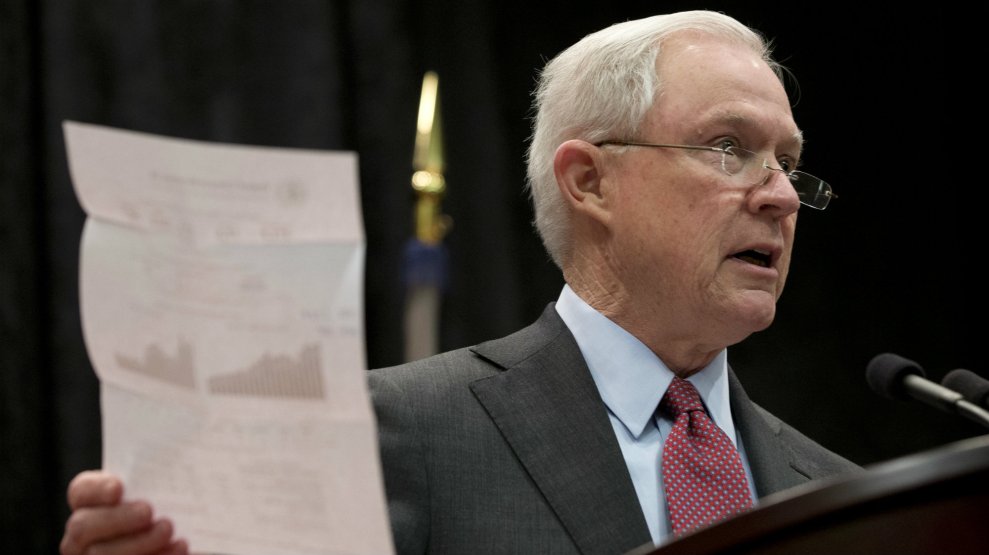 In a recent op-ed in USA Today, Attorney General Jeff Sessions reiterated that his Department of Justice will move away from federal oversight of local police departments plagued by abuses and officer-involved killings. In doing so, Sessions will undermine a key policy stemming from the beating of black motorist Rodney King in March 1991 by Los Angeles police officers. The subsequent LA riots, sparked by acquittals of the officers accused in King’s beating, began 25 years ago this Saturday.

After those riots ripped through LA, Congress went on to pass legislation granting federal oversight authority for police departments. Since then, the Justice Department has launched 70 investigations into state and local law enforcement agencies and has negotiated 40 reform agreements, half of which are court-enforced consent decrees. The Obama administration was particularly active with this policy, enforcing 14 consent decrees for troubled police agencies, from Ferguson, Missouri, to Baltimore. Sessions now threatens to undo that work, downplaying any systematic problems with American policing.

Ordering a review of all consent decrees with police departments, Sessions attributed abuses to a few “bad actors.”

Notably, it all began with a video. The shocking footage of King’s beating, taken from a nearby apartment balcony by an onlooker, was broadcast on national television and soon prompted a congressional committee to hold hearings on police brutality. The House committee heard from nine witnesses in total, including the head of the DOJ’s Civil Rights Division, John Dunne. Under pressure from the Congressional Black Caucus and civil rights groups, Dunne launched reviews of thousands of police brutality complaints filed with the DOJ and 100 lawsuits filed against the LAPD. The FBI also launched a criminal investigation into whether the LAPD officers had violated King’s civil rights.

Dunne testified that federal intervention had gone through various false starts: In 1980, after Congress passed legislation allowing the Justice Department to sue jails and prisons for patterns of constitutional violations, the Carter administration tried to sue the Philadelphia Police Department for a pattern of abuses including excessive force and illegal searches and seizures. But a federal appeals court ruled the administration didn’t have that authority under existing federal law. (Congress had considered legislation granting the DOJ such authority as far back as the civil rights era, Dunne noted, but had failed to act.)

The former director of the ACLU of Southern California, Paul Hoffman, also testified to the subcommittee, recommending that Congress give the DOJ oversight authority. “There really wasn’t any effort at that time to” pass that kind of legislation, Hoffman told me recently. “But it seemed like an appropriate response to what people had seen” in the King video.

A recent report found that most consent decrees enforced by the federal government have been “successful in transforming seriously troubled law enforcement agencies.”

After the hearings, the House Judiciary Committee proposed the Police Accountability Act of 1991. The bill never made it out of committee, but similar language resurfaced in a failed 1993 crime bill and then became law as part of the Violent Crime Control and Law Enforcement Act of 1994, signed by President Bill Clinton.

By then, the nation’s attention had focused again on police abuse by further unrest in the wake of a high-profile police killing in Manhattan, says Hoffman. Debate was also brewing over racial profiling in inner cities as police sought to crack down on drug and gang violence amid soaring crime rates, says Jeffrey Fagan, a police accountability expert at Columbia University.

The 1994 crime bill provided billions of dollars in federal funding to hire more police officers and build more prisons, introduced mandatory minimum sentences for drug offenses, and expanded the number of federal offenses eligible for the death penalty—part of a regime that troubled members of the Congressional Black Caucus. (Those pieces of the bill haunted Hillary Clinton during her 2016 presidential campaign, as critics highlighted her support for the legislation.) The bill nearly died in the House after lawmakers including members of the CBC voted narrowly to block the chamber from taking up a full vote. In negotiations to revive the bill, Republicans won billions of dollars in cuts to social programs aimed at crime prevention, while Congressional Black Caucus members gained a measure granting the DOJ authority to investigate police departments for patterns of constitutional violations and to mandate a court-enforced plan for reform.

“It was the one-sided nature of the 1994 crime bill that was so punitive and really quite draconian in many ways,” says Fagan. “There was an interest certainly by the Congressional Black Caucus to come up with some kind of a balance to the harshness of the sentencing provisions in the 1994 act.” The first “pattern and practice” investigation was opened into the Pittsburgh Police Department in 1997, and the DOJ turned its sights on the LAPD in 2000 after a major scandal involving officers who had framed and robbed gang members made headlines the year before. The LAPD was finally released from federal oversight by a judge in 2013—12 years after the DOJ first reached an agreement with the department on reforms.

Since 1994, many other police departments around the country have been cleaned up thanks to federal oversight. A report published in February by Samuel Walker, a police reform expert at Ohio State University, found that most consent decrees enforced by the federal government have been “successful in transforming seriously troubled law enforcement agencies.”

This March, a federal judge approved a consent decree reached between the Baltimore Police Department and the Obama administration in the waning days of Obama’s presidency. Sessions slammed the agreement, saying the mandated reforms could stymie officers and cause crime to increase. Moves by Trump’s new attorney general have also thrown into doubt the possibility that the DOJ will pursue a consent decree with the Chicago Police Department, where the DOJ documented systemic problems in a scathing report released in January. Those included subpar use-of-force training and supervision so lax that officers culled information from gang members by dumping them in rival territory if they didn’t cooperate. The lack of a federal consent decree would leave city officials and community activists in Chicago with the daunting challenge of ensuring that the Chicago PD follows through on correcting these problems on its own.

In a memo to DOJ staff earlier in April ordering a review of all consent decrees with police departments, Sessions attributed abuses to a few “bad actors.” But “that’s an excuse,” says Hoffman. “In many places there are systematic problems. And that’s why this [oversight] authority makes sense.”