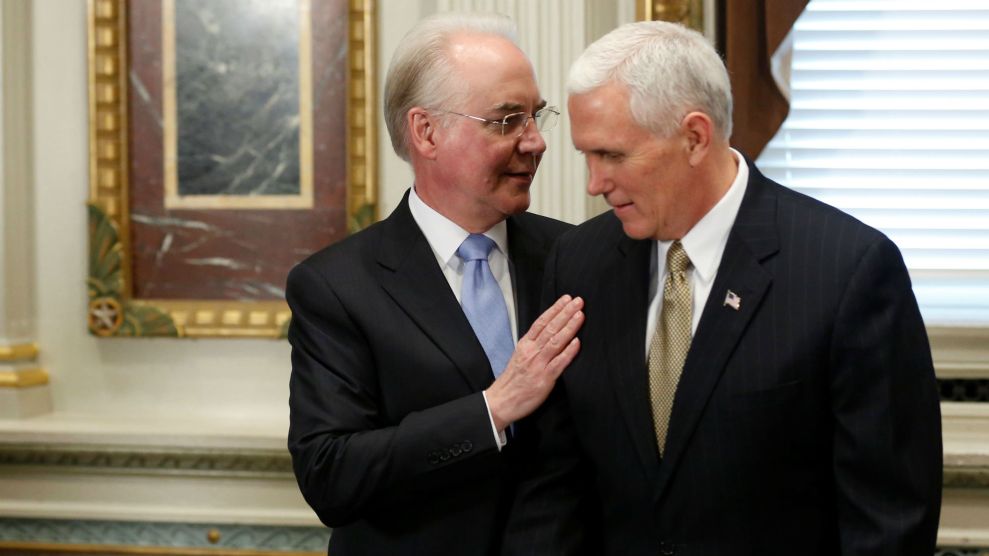 On the same day the stockbroker for then-Georgia Congressman Tom Price bought him up to $90,000 of stock in six pharmaceutical companies last year, Price arranged to call a top U.S. health official, seeking to scuttle a controversial rule that could have hurt the firms’ profits and driven down their share prices, records obtained by ProPublica show.

Stock trades made by Price while he served in Congress came under scrutiny at his confirmation hearings to become President Trump’s secretary of health and human services. The lawmaker, a physician, traded hundreds of thousands of dollars’ worth of shares in health-related companies while he voted on and sponsored legislation affecting the industry, but Price has said his broker acted on his behalf without his involvement or knowledge. ProPublica previously reported that his trading is said to have been under investigation by federal prosecutors.

On March 17, 2016, Price’s broker purchased shares worth between $1,000 and $15,000 each in Eli Lilly, Amgen, Bristol-Meyers Squibb, McKesson, Pfizer and Biogen. Previous reports have noted that, a month later, Price was among lawmakers from both parties who signed onto a bill that would have blocked a rule proposed by the Obama administration, which was intended to remove the incentive for doctors to prescribe expensive drugs that don’t necessarily improve patient outcomes.

What hasn’t been previously known is Price’s personal appeal to the Centers for Medicare & Medicaid Services about the rule, called the Medicare Part B Drug Payment Model.

The same day as the stock trade, Price’s legislative aide, Carla DiBlasio, emailed health officials to follow up on a request she had made to set up a call with Patrick Conway, the agency’s chief medical officer. In her earlier emails, DiBlasio said the call would focus on payments for joint replacement procedures. But that day, she mentioned a new issue.

“Chairman Price may briefly bring up … his concerns about the new Part B drug demo, as well,” she wrote. “Congressman Price really appreciates the opportunity to have an open conversation with Dr. Conway, so we really appreciate you keeping the lines of communication open.”

Although Price said he wasn’t aware of his broker’s trades at the time they were made, he would have learned of his holdings no later than April 2016 when he signed and filed his latest financial disclosure forms.

The call was scheduled for the following week, according to the emails.

The proposed rule drew wide opposition from members of both parties as well as industry lobbyists and some patient advocacy groups. It was meant to change a system under which the government reimburses doctors the average sales price for drugs administered in their offices or inside clinics, along with a 6 percent bonus. Some health analysts say that bonus encourages doctors to pad their profits by selecting more expensive treatments.

Critics argued that the rule might cause Medicare enrollees to lose access to lifesaving drugs. Lawmakers worried the federal government was potentially endangering patients and turning them into guinea pigs in a wide-scale experiment in cost savings.

However, supporters of the rule said the experiment in payments was the kind of drastic action needed to rein in soaring health costs. “We are actively reforming every other aspect of our health-care system to pay for value except pharmaceuticals,” Rep. Jan Schakowsky, D-Ill., said at the time. “Drug manufacturers are the only entity that can charge Medicare anything they want.”

The six companies that Price invested in were steadfastly opposed to the rule. McKesson formally warned investors in a Securities and Exchange Commission filing that such a change could hurt share prices. The firms lobbied the government to kill the plan.

And at two of the six companies Price invested in, people who used to work for the congressman were part of the lobbying effort.

Price’s former chief of staff, Matt McGinley, lobbied House members for Amgen, disclosure records show. Another former Price aide, Keagan Lenihan, lobbied on behalf of McKesson, where she was director of government relations at the time. Lenihan has since reunited with Price, returning to government to work as a senior adviser to her old boss at HHS.

Neither McGinley nor Lenihan responded to requests for comment.

Although Price said he wasn’t aware of his broker’s trades at the time they were made, he would have learned of his holdings no later than April 2016 when he signed and filed his latest financial disclosure forms. In earlier disclosures, Price signed forms listing his other health-related holdings, which included some drug stocks.

Price’s personal intervention raises more questions about the overlap between his investments and his work as a member of Congress.

According to House ethics guidelines, “contacting an executive branch agency” represents “a degree of advocacy above and beyond that involved in voting” on legislation where a financial conflict of interest may exist.

“Such actions may implicate the rules and standards … that prohibit the use of one‘s official position for personal gain,” the guidelines state. “Whenever a Member is considering taking any such action on a matter that may affect his or her personal financial interests, the Member should first contact the Standards Committee for guidance.”

Tom Rust, chief counsel for the House Ethics Committee, declined to comment, saying any consultations with members of Congress are confidential.

In December, after Trump was elected and named Price as his choice to lead HHS, Obama administration health officials scrapped their plan to change the drug reimbursement system. “The complexity of the issues and the limited time available led to the decision not to finalize the rule at this time,” a spokesman said.