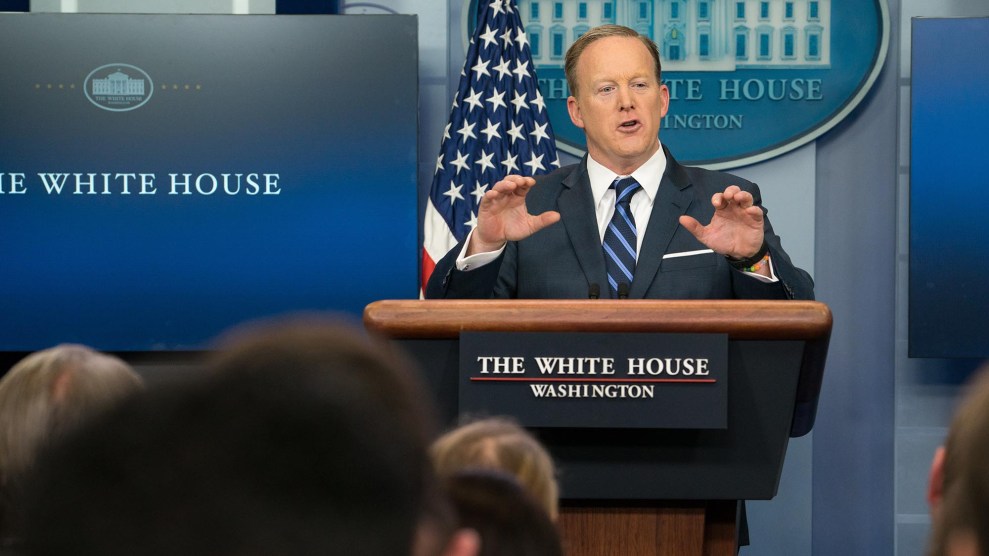 “Today’s chemical attack in Syria against innocent people including women and children is reprehensible and cannot be ignored by the civilized world,” Spicer told reporters. “These heinous actions by the Bashar al-Assad regime are a consequence of the past administration’s weakness and irresolution.” Spicer also said: “President Obama said in 2012 he would establish a red line against the use of chemical weapons and then did nothing. The United States stands with our allies across the globe to condemn this intolerable act.” (Later in the day, the White House issued a statement echoing Spicer’s remarks.)

It will come as no surprise at this point that the Trump White House’s position was hypocritical. First, Obama’s red line at the time was a threat of US military action against Syria should it continue to use chemical weapons. When Obama asked the GOP-led Congress to authorize the potential use of force against Syria, the Republicans, not wanting to take a firm stance, declined to hold a vote. Still, Obama’s move prompted Assad to agree to a Russian-brokered deal to give up his chemical weapons. To a degree, Obama’s threat worked.

Whether or not Obama’s policy in 2013 was successful, this much is clear: at that point, Trump had an unambiguous position regarding Syria— do nothing. Throughout this episode, Trump tweeted up a storm about Syria. Repeatedly, he declared—occasionally in all-caps!—that Obama should not be messing around in Syria. He said there was no reason to attack Syria or take any action there. Let the Arab League deal with the problem. He was asserting that Obama should not respond to the chemical attacks—a policy certainly in sync with Assad (and his Russian patrons). Stay out of this, Trump demanded, and focus on domestic issues.

Here is a sample of Trump’s tweets on the subject:

Obama wants to unilaterally put a no-fly zone in Syria to protect Al Qaeda Islamists http://t.co/DCgP83Oxas Syria is NOT our problem.

We should stay the hell out of Syria, the “rebels” are just as bad as the current regime. WHAT WILL WE GET FOR OUR LIVES AND $ BILLIONS?ZERO

What will we get for bombing Syria besides more debt and a possible long term conflict? Obama needs Congressional approval.

If Obama attacks Syria and innocent civilians are hurt and killed, he and the U.S. will look very bad!

How bad has our “leader” made us look on Syria. Stay out of Syria, we don’t have the leadership to win wars or even strategize.

“@mguarino64: @realDonaldTrump ” How would you treat the Syria situation if president ?” I’d let them all fight with each other-focus on US!

If the U.S. attacks Syria and hits the wrong targets, killing civilians, there will be worldwide hell to pay. Stay away and fix broken U.S.

“@BigSexyBDAvis: @realDonaldTrump mr trump would attack Syria or no?” No, lets make our country great again as they fight their war!

What I am saying is stay out of Syria.

The only reason President Obama wants to attack Syria is to save face over his very dumb RED LINE statement. Do NOT attack Syria,fix U.S.A.

AGAIN, TO OUR VERY FOOLISH LEADER, DO NOT ATTACK SYRIA – IF YOU DO MANY VERY BAD THINGS WILL HAPPEN & FROM THAT FIGHT THE U.S. GETS NOTHING!

Russia is sending a fleet of ships to the Mediterranean. Obama’s war in Syria has the potential to widen into a worldwide conflict.

President Obama, do not attack Syria. There is no upside and tremendous downside. Save your “powder” for another (and more important) day!

Don’t attack Syria – an attack that will bring nothing but trouble for the U.S. Focus on making our country strong and great again!

Obama must now start focusing on OUR COUNTRY, jobs, healthcare and all of our many problems. Forget Syria and make America great again!

We should stop talking, stay out of Syria and other countries that hate us, rebuild our own country and make it strong and great again-USA!

Now Trump is blaming Obama for not adopting a more forceful stance against Assad, even though Trump back then repeatedly proclaimed that Obama should ignore the conflict (and crimes against humanity) in Syria.

This is not the first time Trump has slammed Obama in this manner. During the campaign, Trump absurdly claimed Obama and Hillary Clinton were each a “co-founder” of ISIS because they had overseen the withdrawal of US troops from Iraq. (Neither were in office when ISIS was created, and the troop withdrawal agreement had been signed by President George W. Bush.) Yet in a 2006 interview, Trump had called on Bush to pull all US troops out of Iraq, even if that would lead to more violence and chaos. So as a candidate Trump was excoriating Obama for a policy that Trump had actually called for at the time.

Trump’s response to the horrific Syrian attack follows this pattern: castigate Obama and hope people don’t bother to review Trump’s past positions. Such situational and brazen hypocrisy may be standard operating procedure for Trump. Yet it carries a greater sting when it concerns massacres and war crimes.