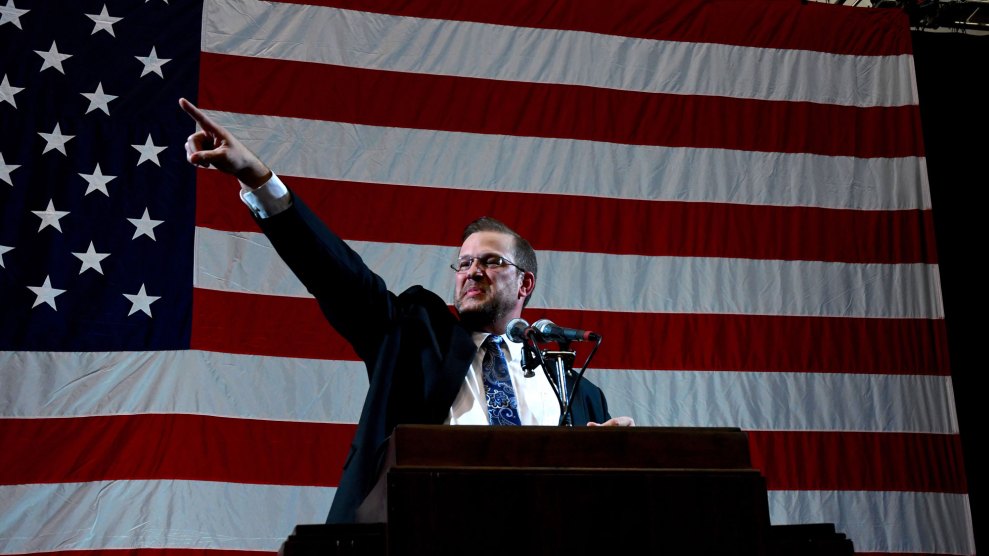 Who would’ve thought the first competitive congressional race of the Trump era would be in Kansas?

On Tuesday, voters in Kansas’ fourth congressional district will go to the polls in a special election to pick a successor to former Republican Rep. Mike Pompeo, who resigned his seat in January to become CIA director. Unlike next week’s special election in Georgia (in a district Hillary Clinton nearly carried in November), or even next month’s special election in Montana (where Democrats have won recent statewide elections for governor and senator), the Kansas race between Republican Ron Estes, the state’s treasurer, and Democrat James Thompson is not one that national Democrats would have ever expected to have a serious shot at. President Donald Trump won the fourth district by 27 points and Pompeo was never seriously challenged in a general election; the district, which includes Wichita, hometown of the billionaire Koch brothers, is an epicenter of Republican power in the state.

But late last week, the National Republican Congressional Committee quietly dumped $92,000 into the race on behalf of Estes, for ads tarring Thompson, a Bernie Sanders acolyte, as a liberal. The NRCC tried to spin the injection as routine but three subsequent moves gave away the game. First, Texas Sen. Ted Cruz announced that he would travel to Kansas to campaign for Estes; then Vice President Mike Pence agreed to record a robo-call on Estes’ behalf; and finally President Donald Trump followed suit. Somehow this ad from Estes, in which he goes wading in a swamp with alligators (in Kansas?) while accusing progressives of attempting to “steal the election,” failed to ice the victory:

Special elections are weird, and Kansas politics is particularly weird—Democrats picked up 12 seats in the state legislature last fall despite the Trump wave, and Republicans recently voted to expand Medicaid in the state. (They did not have enough votes to override Republican Gov. Sam Brownback’s veto, though.) Brownback’s deeply unpopular war on the state budget has made life difficult for rank-and-file Kansas Republicans over the last four years.

Even if Estes prevails, as he’s still expected to, Thompson’s campaign is notable for a few reasons. An Army veteran and civil rights attorney from Wichita, Thompson is a political novice who was inspired to run by Sanders’ campaign. He picked up the endorsement of Sanders’ political outfit, Our Revolution and appeared at an event with the Vermont senator in February. His platform is a mix of progressive populism and red-state credentials; he wants a $15 minimum wage, said in a recent Reddit AMA that he likes the idea of single-payer health care (although he believes it won’t happen in the near-term), and cut a campaign ad in which he shoots an assault rifle.

But what may be most relevant, for the perspective of national Democrats, is how well he was able to assemble a campaign without much help from on high. The Democratic National Committee never offered any money to the state party, and the state party balked at Thompson’s request for a mere $20,000. The Democratic Congressional Campaign Committee only got involved on Monday. Instead, Thompson built his campaigns on thousands of small-dollar donations, in the mold of his political icon, Sanders. And when the race appeared to tighten last week (there have been no reliable public polls of the race), the progressive grassroots showed up in overwhelming force. From last Thursday, when Republicans began to sound the alarm, through Sunday, Daily Kos raised $149,255 for Thompson through ActBlue—an astounding four-day haul for a Democrat in a district Pompeo last won by 34 points. Thompson has raised more in three months for his special election than the 2016 Democratic nominee, Daniel Giroux, raised in 13.

We knew that Democrats were fired up about the special election in Georgia, in a district that’s trending blue and where the party’s de-facto nominee Jon Ossoff raised more money last quarter than any House candidate in history. But Thompson’s ability build a viable coalition in Trump country, largely on his own, may say a lot more about where the party is headed going into 2018.