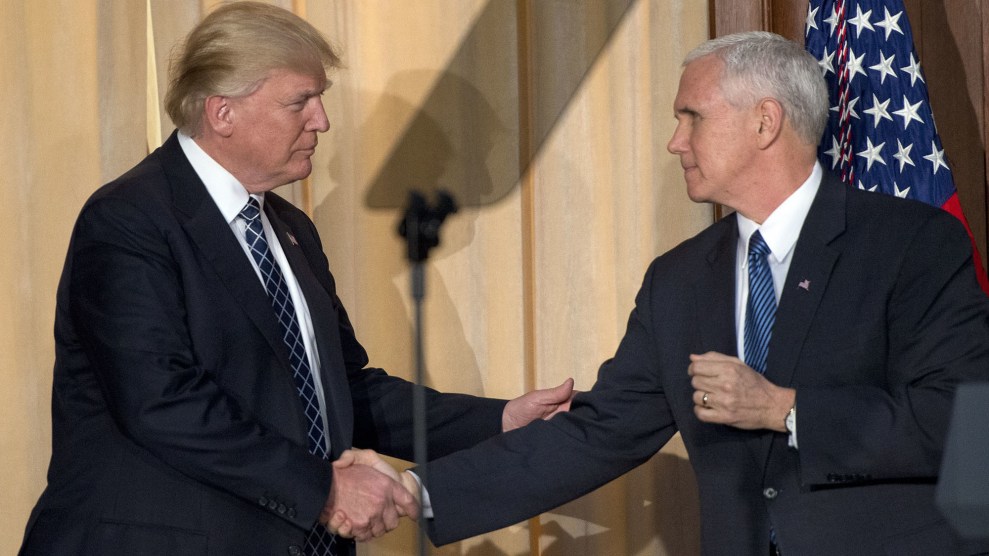 After claiming that as many as 5 million people voted illegally in the November election, President Donald Trump signed an executive order Thursday to create a commission to address voter fraud. With widespread evidence that voter fraud is nearly nonexistent, voting rights groups have seen similar efforts as a pretense to suppress voting among young voters and minorities.

The announcement of the commission’s leadership team reinforced civil rights groups’ concerns that the panel’s work will be used to justify voter suppression techniques such as voter ID laws and registration purges. The commission’s chair will be Vice President Mike Pence. Last year, as governor of Indiana, Pence cheered the actions of state police and the secretary of state’s office as they shut down a voter major registration drive under the guise of protecting the integrity of the voting process.

But the track records of Pence and another former Indiana official on the commission also hint at voter suppression—particularly since the state’s crackdown hinged on one of the targets outlined in Trump’s order: inconsistencies apparently caused in part by outdated voter registration rolls.

In April 2016, a group called the Indiana Voter Registration Project began a registration drive in the Hoosier State, focusing on underrepresented African American communities. By the summer, the group had about 100 canvassers in the state and was registering thousands of people. Under Indiana law, canvassers are required to turn in every voter registration form they receive to the county—they can’t withhold the forms of people who might not vote the way they want—and to sign each form and flag suspicious ones. Bill Buck, a spokesman for the Indiana Voter Registration Project, says canvassers were following all of these rules.

But by late summer, state officials had begun to investigate the group. On September 15, Indiana’s secretary of state, Republican Connie Lawson, warned local election officials about the group’s voter registration efforts. “Nefarious actors are operating here in Indiana,” she wrote. “A group by the name of the Indiana Voter Registration Project has forged voter registrations.” The state police opened an investigation, and canvassers reported that police were interrogating them in their homes.

On October 4, state police raided the group’s Marion County headquarters, seizing phones, computers, and papers. The raid halted the group’s registration efforts a week before the state’s registration deadline, preventing the group from registering an additional 5,000 to 10,000 people, according to Buck. The investigation eventually expanded to 56 counties in Indiana. In mid-October, a spokesman for the state police described vague evidence that the group had been forging registration forms: “The possible fraudulent or false information is a combination of made up names and made up addresses, real names with made up or incorrect addresses and false dates of births with real names as well as combinations of all these examples.”

The Indiana Voter Registration Project, run by a liberal super-PAC called Patriot Majority USA, suspected that the discrepancies were caused by outdated information in the state’s voter rolls. The group was turning in new information it collected, but that information may not have matched older data in the state system. So the group hired a data analysis firm, TargetSmart, to assess the rolls. TargetSmart’s report showed that Indiana’s data was woefully out of date, including more than 800,000 instances in which the voter rolls did not contain the newest federal data. “We were turning in up-to-date data and it didn’t match their old, flawed data,” Buck told Mother Jones last fall.

But Indiana authorities presented the situation as much more insidious. “I’ll tell you, in the state of Indiana right now, we’ve got a pretty vigorous investigation into voter fraud going on,” Pence, campaigning as the Republican Party’s vice presidential nominee, said in Iowa in October, a week after the raid shut the registration drive down. Shortly before leaving office, he awarded Lawson the state’s highest civilian honor. Lawson will also serve on Trump’s new commission.

The state police stated in affidavits released after the election that they believed that among the thousands of registration forms the group turned in were some that appeared to have been forged. From the evidence presented, it seemed likely that a few canvassers had fraudulently filled out applications. But Patriot Majority USA claimed it was vindicated by the release of these documents because, in addition to apparent evidence of forged applications, they also showed that the group’s staff had flagged suspect applications for county authorities. Buck concedes it’s possible that a few canvassers had broken the rules and forged applications, but that that could not account for the accusation of large-scale fraud from the Lawson’s office. “[T]housands of dates of births and first names were changed,” Lawson said in a statement last October. “We believe this may be a case of voter fraud and have turned our findings over to the State Police, who are currently conducting an investigation into alleged voter fraud.” Buck says the claim that thousands of voters had their information altered is an indication that the rolls were out-of-date. “Their theory was that we were paying people to sit around and make up forms,” he said. “Why would we be doing this? What would we have to gain?”

There is no evidence that any fraudulent ballots were ultimately cast. It wasn’t even clear how forged registration forms or mismatched registration data could lead to in-person voter fraud, since Indiana has a law requiring voters to present identification. In late January, the state police finished their investigation and turned it over to the Marion County prosecutor to determine whether to file any charges. Contrary to Pence’s statement, a spokeswoman for the prosecutor’s office stressed that the police had not investigated voter fraud. “[T]he Indiana State Police investigated alleged voter registration discrepancies prior to the November 2016 election,” Peg McLeish told Mother Jones in an email. “The investigation was not into fraudulent voting, that being ballots cast improperly.” McLeish says the prosecutor has not yet decided whether to press charges.

Other states have used outdated voter registration to pursue legally dubious purges of their voter rolls that disproportionately affect minority voters, who more often vote for Democrats. In 2010, Georgia instituted a policy of automatically rejecting a voter application form if the name, birth date, driver’s license number, or last four Social Security number digits didn’t exactly match the state’s existing data. Over a three-year period, this resulted in 34,874 canceled applications, more than 75 percent of which were from minority applicants. In February, the state agreed to modify the practice as part of a court settlement with civil rights groups.

Voting rights advocates condemned Trump’s order on Thursday. “As President Trump’s own lawyers have said, ‘All available evidence suggests that the 2016 general election was not tainted by fraud or mistake,'” Dale Ho, director of the American Civil Liberties Union’s Voting Rights Project, said in a statement. “Signing a piece of paper will not make Trump’s false statements about voter fraud true. This commission, to be co-led by King of Voter Suppression Kris Kobach, is a sham. We call on professional elections administrators, serious academics, and elected officials to refuse to participate in what will be a pretext for disenfranchising Americans.”

The “only good news,” election law expert Rick Hasen wrote on his blog, is that the “Administration’s credibility is so low that few except the true believers are likely to believe anything produced by the likely worthless report.”