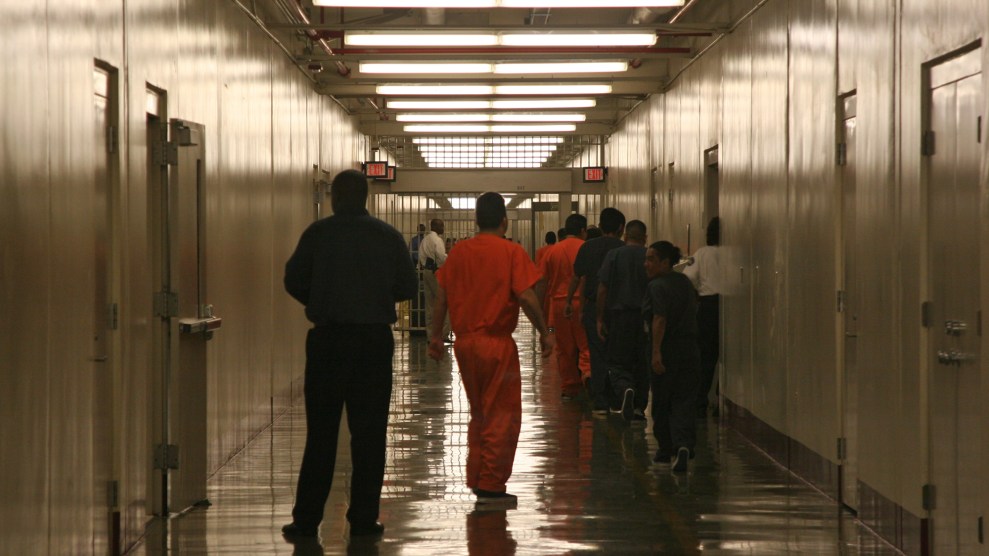 A Panamanian man held in an Immigrations and Customs Enforcement (ICE) detention center died in an apparent suicide Monday after being held for 19 days in solitary confinement. Jean Jimenez-Joseph, 27, had spent two months in the Stewart Detention Center, a for-profit facility run by the private prison company CoreCivic, prior to his death on May 15.

While the investigation into the circumstances around Jimenez’s death is ongoing, according to Danny Jackson, the Georgia Bureau of Investigations special agent in charge of southeast Georgia, a recently released report on the Stewart Detention Center sheds light on some of the conditions he may have endured in the weeks leading up to his death.

ICE took Jimenez into custody in March, after he served time in North Carolina for stealing a vehicle. The agency began deportation proceedings and transferred him to Stewart. In late April, Jimenez broke the the facility’s rules when he jumped from a second-floor landing to the first. “You’re supposed to take the stairs down,” Jackson says. “He decided he was going to jump over the rail.” For this infraction, Jimenez was given 20 days in disciplinary segregation—otherwise known as solitary confinement. (A United Nations expert on torture has called for the “absolute prohibition” of solitary confinement for longer than 15 days, citing studies that show just a few days in isolation can cause lasting mental damage.)

Stewart detainees have been put in segregation for less, according to allegations in a report released earlier this month by Penn State Law’s Center for Immigrants‘ Rights Clinic and the advocacy group Project South. Drawing on interviews with more than 40 immigrants who had been held at the facility, the report’s authors found that men had been sent to solitary for talking too much, not tucking in their shirts, or arguing during soccer matches. Others were put in segregation because they filed complaints, or simply because Stewart’s other housing areas were full.

Once inside, segregation was “like hell,” one Nigerian immigrant told the report’s authors. Each day, they had to chose between making a phone call or getting an hour of recreation outside. They were not allowed to shower and had to be handcuffed and escorted each time they needed to use a toilet. Without windows, they couldn’t tell if it was day or night. Their meals were smaller than the usual rations.

Five days into solitary, Jimenez “exposed himself” to a nurse, Jackson says, and his sentence was extended to 23 days. He got through 19. “He was in a cell all by himself, in an isolation cell,” Jackson says. At approximately 12:45 a.m. on May 15, a detention officer found him hanging by a sheet inside the cell, unresponsive. It had been an hour since a guard had walked by his cell door, Jackson says. “They took him down from the position he was in, put him on the floor, and started lifesaving measures.” Jimenez was pronounced dead at a local hospital less than two hours later. The preliminary cause of death was “self-inflicted strangulation.”

Jackson warns that investigators can’t yet say for sure what led to Jimenez’s death. But if Jimenez was suffering from mental-health problems, there’s a good chance it would have gone undiagnosed and untreated at the facility, according to Azadeh Shahshahani, Project South’s legal and advocacy director, who oversaw the report released earlier this month. While Stewart offered counseling, most detainees interviewed by the report’s authors didn’t know about it, Shashahani says—or they were too afraid that seeking mental-health care would lead to them being placed in segregation. Expressing suicidal thoughts could land a detainee in solitary, she says. Those with “serious mental afflictions,” according to the report, were “given pills and then are placed in handcuffs and helmets and put in segregation.”

In its press release about Jimenez’s death, ICE noted that fatalities under its custody are “exceedingly rare,” and that no detainees had died in Stewart in more than eight years. Jimenez’s death was one of eight that have taken place in ICE custody since last October, and the second suicide in the past two months.