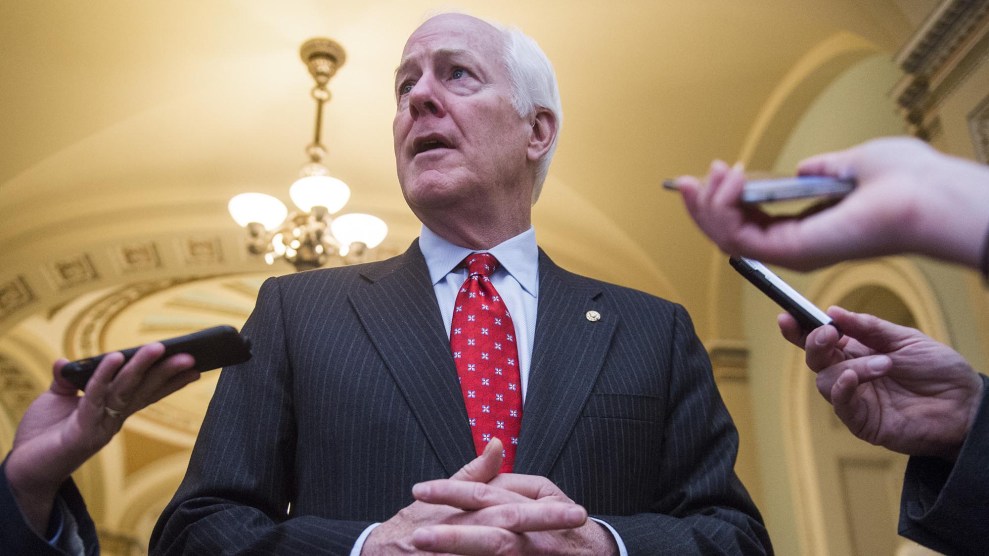 President Donald Trump told reporters over the weekend that he would “make a fast decision” on his nomination to replace James Comey, the FBI director he fired in part due to, in Trump’s words, the “Russia thing.” Trump’s sudden and brazen decision to remove Comey amidst the ongoing FBI investigation into possible ties between Trump associates and the Russian government earned him a week’s worth criticism — even from a few Republicans. But at least one of the possible nominees Trump is considering would pose a significant problem. If picked to be FBI director, Sen. John Cornyn (R-Texas) would manage an investigation that he has shown very little interest in seeing pursued.

The idea of nominating a Republican politician to the post has been criticized by members of both major parties. “John Cornyn under normal circumstances would be a superb choice to be FBI director,” Sen. Lindsey Graham (R-S.C.) said this weekend on Meet the Press. “But these are not normal circumstances.” Sen. Chuck Schumer (D-N.Y.), the senior Democrat in the US Senate, echoed Graham’s concerns about Cornyn. “First, the nominee should be not a partisan politician, not part of either party. This demands a serious, down-the-middle investigation,” Schumer said.

Cornyn does have some of the typical resume lines for an FBI director. Before he was elected to the US Senate in 2002, Cornyn served as a district judge in Texas, a judge on the Texas Supreme Court, and as the state’s attorney general. But like many of his GOP colleagues in the Senate, Cornyn has been less than enthusiastic about the FBI’s investigation into the president’s ties to Russia. As a member of the Senate judiciary committee, Cornyn has said that the Russia affair should be investigated, but he has generally focused more on intelligence leaks and the issue of “unmasking“—the process of revealing the identity of an American incidentally caught up in US surveillance of foreign targets—that has been used by Republicans to distract from Moscow’s meddling and to support Trump’s unfounded claim that former President Barack Obama spied on him.

During a May 8 committee hearing on Russian interference during the election—where witnesses John Clapper, the former director of national intelligence, and Sally Yates, the former acting attorney general, talked extensively about the Russian intervention and the national security threat posed by Michael Flynn during his short stint as Trump’s national security adviser—Cornyn used his time to slam Susan Rice, Obama’s national security adviser, for not appearing before the committee, to decry the supposed “unmasking” of Flynn, and to press Yates on why she had refused to defend Trump’s Muslim ban in court. He did not address the main issue at hand: Vladimir Putin’s effort to undermine an American election.

Cornyn hasn’t always shown the same reticence to dive into politically sensitive investigations. In September 2015, he asked then-Attorney General Loretta Lynch to appoint a special prosecutor in the Hillary Clinton email investigation. At that time, Cornyn argued that the political appointees in Obama’s Justice Department weren’t capable of mounting an independent investigation. But these days, Cornyn resists calls for a special prosecutor in the Russia scandal. Cornyn’s office did not respond to a request for comment.

In December, Cornyn downplayed the Russia matter on Twitter:

All this “news” of Russian hacking: it has been going on for years. Serious, but hardly news

“We’ve got a chance to reset here as a nation,” Graham said over the weekend. “The president has a chance to clean up the mess that he mostly created. He really, I think, did his staff a disservice by changing the explanation. So I would encourage the president to pick somebody we can all rally around, including those who work in the FBI.”