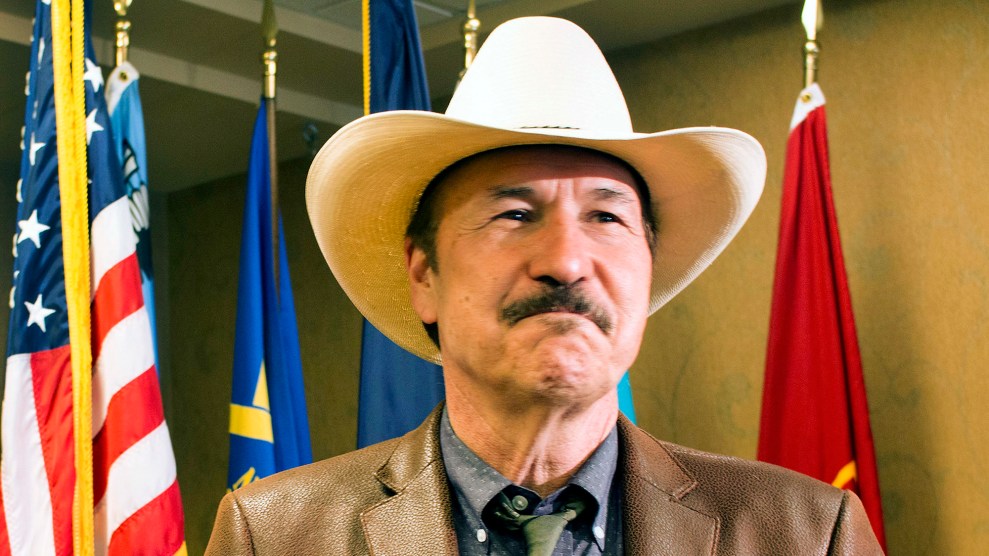 With Thursday’s special election approaching, the race for Montana’s vacant House seat has gone national. The president’s son Donald Trump Jr. flew to the small town of Hamilton to raise money for Republican businessman Greg Gianforte; Bernie Sanders made a four-stop swing through the Big Sky to stump for Democrat Rob Quist. Both parties have tried to nationalize the race: The Democratic Congressional Campaign Committee injected $600,000 into the contest, and its Republican counterpart has already spent several times that.

With the congressional midterms still 18 months away, Democrats have seized on House special elections as an early test of their political energy and an opportunity to steal a few seats. In a historically red Georgia district, Democrat Jon Ossoff has raised more than $10 million in his bid to replace Health and Human Services Secretary Tom Price and is approaching 50 percent in the polls ahead of the June 20 runoff. Kansas Democrat James Thompson narrowly lost his bid to replace CIA director Mike Pompeo, in a district Donald Trump won by 27 points.

Quist, a country singer rarely seen without his white cowboy hat, thinks he can kickstart a Democratic turnaround in the House by betting big on the smallest of issues: a fishing hole.

In the race to fill the seat vacated by Interior Secretary Ryan Zinke in March, Quist has tapped into deep-seated fears about the fate of Montana’s public lands in Republican-dominated Washington. He has held six rallies “for public lands” across the state and been buoyed by a massive “hands off public lands” protest in Helena and a growing network of progressive grassroots groups. At the heart of his critique of his rival is a decade-old story about a river, a trail, and a legal threat that just a few months ago helped dash Gianforte’s bid for governor.

Gianforte, a wealthy businessman who moved to Montana from New Jersey two decades ago, should have had the wind at his back in the gubernatorial race in a state Trump won easily. But Gov. Steve Bullock, the Democratic incumbent, succeeded in positioning himself as a champion of the outdoors—and Gianforte as its greatest threat.

The acquisition of federal lands in the West was a huge issue during the Obama years, culminating in a string of high-profile showdowns between members of the Bundy family and federal agents in Nevada and Oregon. Many Republican state lawmakers, including in Montana, pushed legislation that would compel the federal government to transfer the deed to some of its public lands to their states. Bullock was fiercely against the idea; Gianforte suggested that such a move might be appropriate at a later time. But Gianforte had also donated money to the Republican lawmaker who chaired the American Lands Council, the primary driver of the lands-transfer movement.

Maybe that alone wouldn’t have been enough to sink Gianforte, but Bullock had a trump card: a 2009 legal battle. Gianforte’s property abutted the East Gallatin River outside Bozeman and included an easement long used by locals for fishing. (The easement was granted through an agreement with the property’s previous owner.) Gianforte argued that the easement was ruining his property and sued the state of Montana to have to have the area closed off. He eventually reached a compromise with the state, but the dispute fed into Bullock’s narrative. It was one thing to campaign on the fear that Republicans would try to limit public access to public lands, but it was far easier when Gianforte had actually tried to do it.

Quist, a country singer rarely seen without his white cowboy hat, thinks he can kickstart a Democratic turnaround by betting big on the smallest of issues.

“Montanans have been locked in a battle against wealthy out-of-state land owners buying up land and blocking access to places Montanans have literally enjoyed for generations,” Bullock said at the time. He hammered Gianforte’s river-access suit in speeches and ads.

When, at their final debate, Gianforte sought to dispute the governor’s version of events, Bullock pulled out a copy of the complaint, ignoring the agreed-upon prohibition on props.

“I just want to note the governor violated the rules,” Gianforte said.

“I just want to note Greg Gianforte sued all of Montana,” Bullock said.

“I’ve been doing this a while and it was one of the most damaging negatives I’ve ever seen,” says Eric Hyers, Bullock’s 2016 campaign manager.

When the DCCC got involved in the race in April, it wasted no time jumping on the easement fight. “You’ve seen it before: millionaires buying trophy ranches in Montana, then suing to block you out,” a narrator intoned in the group’s first ad, over an image of a “no hunting” sign. “Well it’s exactly what this millionaire from New Jersey did.” Last week, Quist went a few steps further; in two new ads running statewide, he walks along the very riverside trail Gianforte sought to block access to, declaring, “You shouldn’t have to be rich to get outdoors in Montana.”

Other Democrats have tried this line of attack with less success. Zinke, who hails from just outside Glacier National Park, easily won reelection and then the Interior job in part because of the perception that he was more of a conservationist than other candidates. (It was Backcountry Hunters and Anglers, the nonprofit that helped organize the public-lands protest and whose director ran a dark-money group that helped Democratic Sen. Jon Tester win reelection in 2012, that reportedly lobbied Donald Trump Jr. to consider Zinke for the Interior job.) The key to the public lands movement’s success in resisting the land-transfer push has been that it comprises more than just crunchy environmentalists. It also has the backing of hunting and fishing groups and trade associations such as the Montana Wood Products Association.

After President Trump’s inauguration, fears grew that public lands would come under threat. In late January, one week after the Helena women’s march drew record crowds to the capitol grounds, 1,000 demonstrators, organized by a coalition led by the Montana Wilderness Association, crowded inside the capitol building with luminaries such as Bullock, Tester, and Hilary Hutcheson, a fly-fishing guide who hosts a popular TV show on Trout TV. They had a specific concern in mind: that the Trump administration would sign off on a push by congressional Republicans to sell off public lands.

Similar events, dubbed “Public Lands in Public Hands,” were held across the West—500 people in Santa Fe; 200 in Boise. A few days later, Rep. Jason Chaffetz (R-Utah), who had sponsored the sell-off proposal, backed down. “I hear you and HR 621 dies tomorrow,” he wrote in an Instagram post.

With Zinke running the Interior Department, the status of Montana’s lands is no less fuzzy. In May, Zinke announced that he was reviewing the status of some three dozen national monuments established over the previous three presidential administrations, with the possible end result of revoking their protected status. Among the monuments on the chopping block: Montana’s own Upper Missouri Breaks.

The clearest sign of how potent the public-lands protests—and messaging—have been is that Gianforte himself is using the protesters’ language. “I’ve been very clear all along that public lands must stay in public hands,” he told Montana Public Radio in an interview earlier this month, echoing the language used by the demonstrators. “I’ve been very clear. I don’t support deed transfer of lands. Public lands have to stay in public hands.”

The race to replace Zinke is in some ways a fitting coda to the political fights of the Obama administration, which saw a new “Sagebrush Rebellion”—the name for the ’80s anti-government movement led by Western ranchers— that featured, most sensationally, the antics of the Bundy clan. These new Sagebrushers were backed up by a new crop of local law enforcement leaders who resisted federal authority, as well as legislators, in Washington and state capitals, bent on redistributing federal lands to the states.

The Trump administration’s push to reconsider places like Upper Missouri Breaks, which have been in the sights of conservative groups for a long time, represents a high-water mark for this movement. Quist is hoping his race is the beginning of another kind of wave.