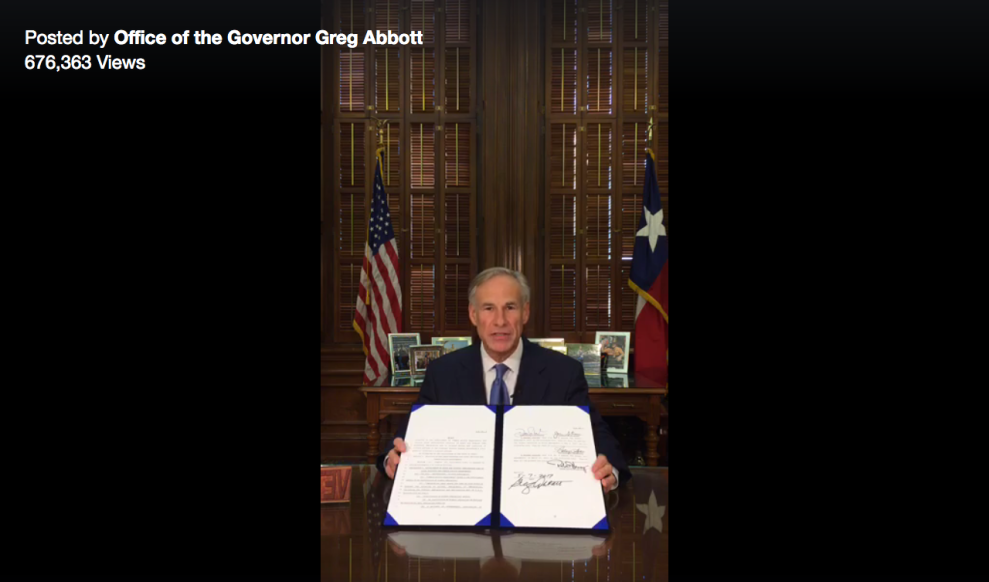 “Texans expect us to keep them safe—and that’s exactly what we’re going to do by me signing the law,” Abbott told the camera, punctuating his remarks by tapping the bill before signing it. “Texas has now banned sanctuary cities in the Lone Star State.”

“It won’t be tolerated in Texas,” Abbot continued. “Elected officials and law enforcement agencies, they don’t get to pick and choose what laws they will obey.”

Immigration advocates are describing it as the most hostile state law to undocumented immigrants in the country and point out that sanctuary cities are actually safer than other cities, according to FBI crime data. The Facebook Live event allowed the governor to avoid protests a typical signing would have likely drawn, the Texas Tribune noted. A spokesperson for the governor claimed the move was an effort to reach people directly where they’re consuming news.

Abbott declared banning sanctuary cities, jurisdictions that refuse to fully cooperate with federal immigration authorities, a legislative priority this year, and Texas has quickly become one of the battlegrounds in the national debate over them. When Travis County Sheriff Sally Hernandez announced her department would no longer comply with immigration authorities after taking office earlier this year, the governor cut off funding in retaliation and even threatened to oust her. Meanwhile lawmakers in the statehouse have been debating how wide-reaching the ban on sanctuary cities should be, settling on legislation late last month after a 16-hour marathon hearing. Horrified by the outcome, immigration advocates have pushed back, protesting at the state capitol during the lengthy hearing on the bill last month and gathering outside the governor’s mansion last night.

SB 4 does far more than simply outlaw sanctuary cities. When the new rules go into effect, law enforcement officials and other local leaders who refuse to cooperate with immigration authorities could face to up to a year of jail time and be personally fined up to $4,000. Additionally, any local government violating the law will also be subject to fines—$1,000 at first with each single subsequent infraction adding penalties that can potentially reach $25,500.

The law also grants law enforcement throughout the state sweeping new powers that many immigration advocates consider a form of profiling. One of the most controversial provisions of the new law allows police officers to question someone’s immigration status during encounters such as a routine traffic stop as opposed to during a lawful arrest.

David Leopold, an immigration lawyer and the former head of the American Immigration Lawyers Associates, says it’s the most hostile state law to undocumented immigrants in the country. “It’s like SB1070, the Arizona ‘show me your papers’ law, on steroids,” Leopold says, referring to the controversial legislation that required police to check the immigration status of anyone they detain if they believe that person might be in the country illegally.

“This is a license to racially profile,” Leopold says. “What Texas has done here is told the police…if a person has an accent, is brown, you should probably start asking questions about their immigration status.”

While much of the Arizona law was gutted by the Supreme Court in 2012, the “show me your papers” portion was not struck down—though the justices left open the possibility that such laws could be ruled as being unconstitutional at a later time.

When SB 1070 passed, it sparked outrage across the country and businesses as well as other state governments boycotted Arizona. Immigration activists are strenuously protesting the Texas measure, and the Mexican American Legal Defense and Educational Fund is planning to sue before it takes effect in September. But so far, the new law isn’t attracting nearly the kind of national attention that Arizona’s law once did.

Leopold points out that this law “came up quietly.” In the seven years since SB1070 was debated, he says, the capacity for outrage about these measures has waned because “we’ve had so much outrageous news about immigration, so many outrageous things and shocking things have happened since Donald Trump took office.”