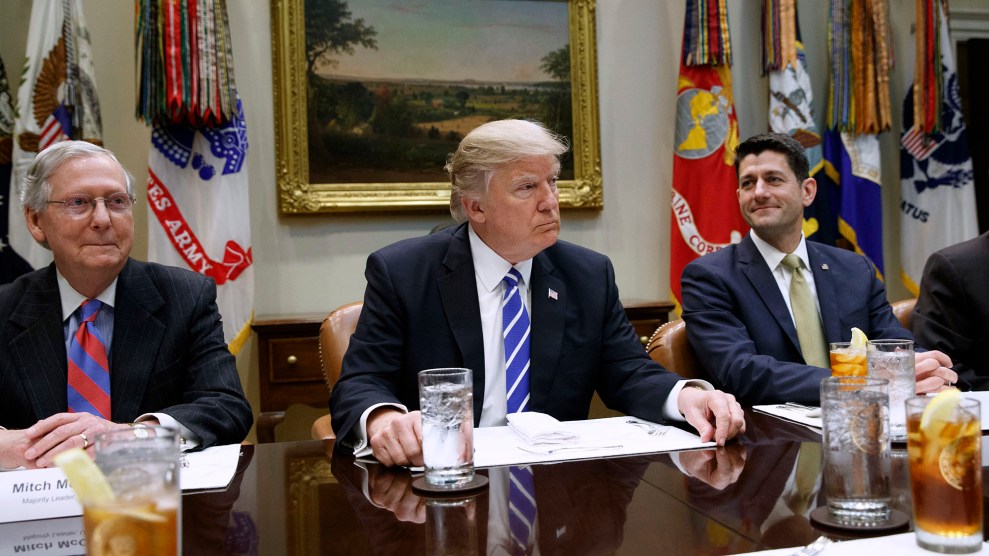 Following the explosive report that President Donald Trump leaned on then-FBI director James Comey to go easy on former national security adviser Michael Flynn—and the explosive report that Trump’s transition team knew Flynn was under FBI investigation when Trump tapped him to be his top national security aide—an increasing number of congressional Republicans have begun to accept the need for full-scale investigations along with the appointment of Robert Mueller as the new special counsel to examine the Trump-Russia affair. But party leaders have not reached the point where they are willing to truly confront the scandal-plagued president. The GOP establishment can’t and won’t thoroughly challenge Trump over the assorted controversies brewing within his chaotic administration. To do so would risk a nuclear civil war that could blow their party to smithereens.

Ever since Trump moved into the White House, liberals (and others) have plaintively asked, why aren’t Republicans fiercely investigating Trump and his crew and seeking to hold them accountable for various instances of improbity? There’s been plenty to choose from: the Trump-Russia scandal, the smorgasbord of financial conflicts of interests involving Trump and his family members in and out of government, other possible ethics violations (including nepotistic hiring), the ever-widening Michael Flynn affair, and so on. In the wake of Trump’s firing of Comey, the guy in charge of a FBI investigation that could land on Trump’s doorstep, and the subsequent report (denied by the White House) that Trump pressured Comey on Flynn, some GOPers on Capitol Hill have gently called for probes into these matters. But by and large, Republican leaders have not dared to take on Trump vigorously. “The last thing I’m going to do is pre-judge anything,” House Speaker Paul Ryan said Wednesday.

One reason Republicans have been reticent to criticize Trump is obvious: they care more about working with—that is, using—Trump to attain their most beloved policy desires: generous tax breaks for the wealthy, draconian budget cuts for government programs (including those that assist low- and middle-income Americans), and the repeal-and-replace-or-whatever of Obamacare. But there’s a related reason: if congressional Republicans were to challenge Trump in forceful fashion, it could destroy the GOP.

Pop quiz: who’s the most vengeful politician on the scene today? Yes, it’s Trump. As I reported before Election Day, Trump is completely obsessed with revenge. For years, Trump often said in paid speeches that a key to success is that you have to be a merciless SOB when dealing with foes. Here’s how he spelled it out: “Get even with people. If they screw you, screw them back 10 times as hard. I really believe it.” Another time, he elaborated:

One of the things you should do in terms of success: If somebody hits you, you’ve got to hit ’em back five times harder than they ever thought possible. You’ve got to get even. Get even. And the reason, the reason you do, is so important…The reason you do, you have to do it, because if they do that to you, you have to leave a telltale sign that they just can’t take advantage of you. It’s not so much for the person, which does make you feel good, to be honest with you, I’ve done it many times. But other people watch and you know they say, “Well, let’s leave Trump alone,” or “Let’s leave this one,” or “Doris, let’s leave her alone. They fight too hard.”  I say it, and it’s so important. You have to, you have to hit back. You have to hit back.

With the president showing signs of narcissism and paranoia—on Tuesday, he declared, “No politician in history…has been treated worse or more unfairly” than he has been—Republican politicians who dare to confront Trump can expect to be targeted and mowed down by Trump.

Prior to the recent Comey and Flynn controversies, many GOPers were scared of Trump. A House Democrat a few weeks ago told me of a conversation he had with a Republican colleague whom he was close to persuading to sponsor a piece of legislation that would likely be popular in the GOPer’s district but not fancied by the Trump White House. “I just can’t do it,” the Republican finally admitted to the Democrat. “He’ll come after me on Twitter.” The wrath of Trump was something this Republican feared deeply—just over a policy disagreement.

Imagine if Republicans squared off against Trump regarding a matter involving his integrity—or one that could pose an existential threat to his presidency. (Examining the Comey issues as possible acts of obstruction of justice could well lead to the question of impeachment.) Trump certainly would not consider such action kindly. And if he were going to screw them back 10 times as hard, what would that mean for congressional Republicans?

It would be quite improbable that a raging and revenge-seeking Trump would be able to collaborate with Republicans on legislative priorities. What would be more important for Trump: working with Republicans to achieve tax reform or extracting payback?

If the going gets tougher, Trump will insist on fealty from his fellow Republicans. Yet if some opt to join the forces of investigation, a dividing line would be created within the party: you’re with Trump, or you’re not. Of course, Trump and his minions would be keeping score. During the the first and chaotic effort of House Republicans to gut Obamacare, the Trump White House considered compiling an enemies list of those GOPers who opposed the Trump-backed bill. Republicans who threatened his presidency could expect much worse than being placed on a roster of unfriendlies.

This is far more than an inside-Washington affair. Trump’s base is the party’s base. Despite all the screw-ups, false assertions, broken promises, and flip-flops of Trump’s still young (but exhausting) presidency, he remains hugely popular among Republicans—84 percent of Republicans still approve of Trump in the latest Gallup poll—who presumably buy his “fake news” attacks on media reports that cast him as an autocratic, truth-challenged, and bumbling president. If Republicans on Capitol Hill turn against Trump they could well encounter the fury of their most dependable voters. In the fight for the soul of the party, could GOP leaders (Washington insiders!) best the demagogic Trump? Sen. Mitch McConnell or Rep. Paul Ryan would be no match for him. The idea of a President Pence would likely be little consolation for the base during a clash between Republicans and Trump.

The Republican establishment has already demonstrated that political calculations, not principles, are its driving force. And one calculation is easy to process: if the GOP breaks rank with Trump on any of these scandals, there will be no turning back. An irate (and irrational?) Trump would demand retribution. A base already suspicious of GOP insiders could become furious. Tax cuts and the like would be at risk. The party itself would be endangered. Of course, as is so often noted, if the Republicans start to feel Trump-related electoral pain—say, they lose one of the upcoming special House elections in GOP-leaning districts—they might reevaluate their situational loyalty to Trump. But the smart ones know the costs of such a course—even if necessary for survival—could be exceedingly high.

There is no good answer for congressional Republicans facing the dilemma of what to do about Trump. They long ago decided to lash themselves to a man with a decades-long record of dishonesty, arrogance, bullying, sleazy deal-making, and score-settling. There are no easy escape routes. No convenient off-ramps. No lifeboats on this ship. He made the bed, and they leaped into it. (Oh, Donald!) Now they’re screwed. The old cliché is that you don’t go after the king unless you can kill the king. But for Republicans, the situation is worse that that: it may not be possible for them to battle their king without razing their kingdom.