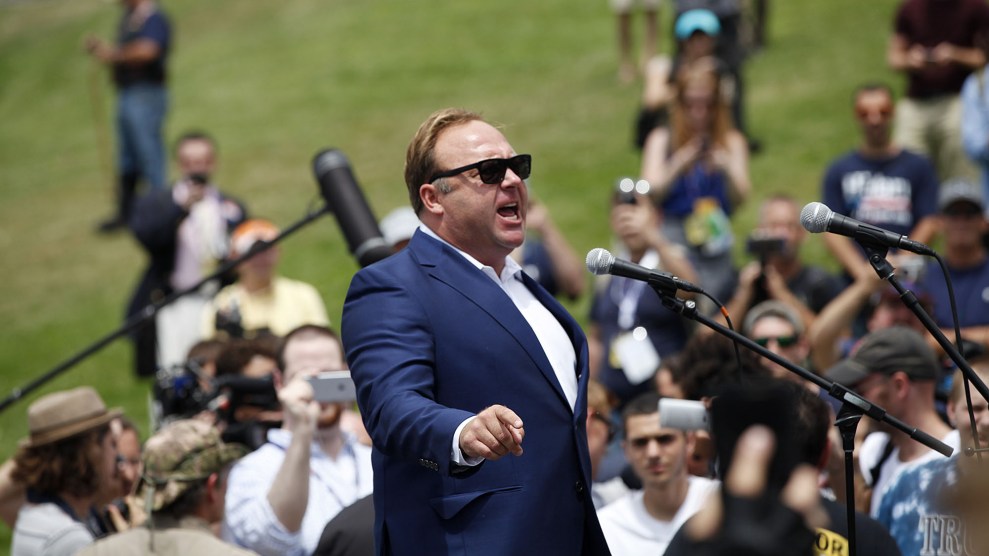 Alex Jones holds a rally outside of the 2016 Republican National Convention.Terray Sylvester/VW Pics via ZUMA Wire

On Sunday night, Fox-turned-NBC News star-anchor Megyn Kelly announced that in a week she would be airing an interview with Alex Jones, the well-known purveyor of foul and dangerous conspiracy theories. Within a nanosecond or two, folks on Twitter went wild, bashing Kelly for giving Jones a platform for slinging his loathsome swill. Much pointed and passionate criticism came from those who rightfully noted that Jones has claimed that the horrific massacre in 2012 at Sandy Hook elementary never happened and that it was some sort of false-flag fraud perpetuated by a gun-grabbing government to justify tougher firearms restrictions. (A gun violence prevention group founded by family members of Sandy Hook shooting victims dropped Kelly as host of its annual gala.)

Those who have contended that Kelly ought not treat Jones, a carnival barker of paranoia, as a public figure warranting serious treatment have a legitimate gripe. But this episode is part of that ongoing debate over how much respect and attention the media should grant to extremists of the fringe—say, white supremacists or anti-Muslim bigots—who espouse hate and prejudice. Do such people deserve to be placed in the media spotlight to expose their vile views, or does that enable the hate-mongers? Yet in this particular case, the true story is not so much Jones and his crazy and contemptible notions, but a more important matter: President Donald Trump’s relationship to Jones.

What renders Jones a serious subject is that Trump has made common cause with him.

For years, Jones, through a radio show and his Infowars website, has been the king of conspiracy theory media, pushing a host of outlandish and ludicrous stories. He and his website have claimed that the Bush-Cheney administration was in on the 9/11 attacks and that the US government has covertly orchestrated or faked a variety of violent episodes—Sandy Hook, the Columbine shootings, the Oklahoma City bombing, and the Boston Marathon attack—as part of an ongoing (and bipartisan!) plot to expand its power and enact gun safety laws. Infowars asserts that “chemtrail” emissions from aircraft are part of a clandestine scheme to poison humans or cause extreme weather. Jones says a secretive global elite has a clandestine plan to kill off or enslave most of the planet’s population. He has claimed the government is inserting chemicals into people—via juice boxes!—to make children gay. His conspiracy-peddling, while profitable for him, has caused pain and danger. Infowars promoted the ridiculous Pizzagate theory—that Hillary Clinton and other top Democrats were running a child sex ring in the basement of a certain Washington, DC, pizzeria—and a gunman showed up at the restaurant and fired off shots when customers, including children, were present. (Jones eventually and uncharacteristically apologized for his role in Pizzagate.)

Jones should be derided and dismissed as a bombastic sideshow scammer who makes a living selling fake news to the gullible. During a recent custody battle with his ex-wife, Jones’ own legal team referred to him as a “performance artist” who was “playing a character,” suggesting Jones didn’t believe the guff he was pitching. (A day later, Jones said this characterization was false and his lawyers had been misinterpreted by the media.) But what renders Jones a serious subject is that Trump has made common cause with him. That’s a connection worthy of much more media notice than it has garnered because of what it says about the judgment of the man who now lives in the White House.

During his presidential campaign, Trump forged a bond with Jones. In a way, that was inevitable. Trump first became a conservative darling by pressing the Obama-was-born-in-Kenya conspiracy theory. And throughout the campaign and afterward, he has shown a bent for conspiratorial and paranoid thinking. He hinted there was something odd about the death of Supreme Court Justice Antonin Scalia. He suggested that terrorist attacks in the United States were not being stopped because President Barack Obama had ties with or affection for the evildoers. Trump maintained Ted Cruz’s dad was part of the JFK assassination conspiracy. (More recently, Trump tweeted that he had been wiretapped by Obama.)

Trump told Jones, “Your reputation is amazing. I will not let you down.”

As a candidate, Trump ran into the arms of Jones. In December 2015, he appeared on Jones’ talk show. That in and of itself was telling: a candidate from a major party venturing into this netherworld of paranoia and conspiracy. (Ron and Rand Paul were the only other prominent politicians in recent years to appear with Jones.) During the show, Jones praised Trump for being a modern-day George Washington who could save this nation before it collapses. He beseeched Trump to stay in the race and resist pressure from dark globalist forces opposed to his candidacy. Trump took the opportunity to brag that he had brilliantly foreseen the threat posed by Osama bin Laden years before anyone else. (Trump had not.) Jones cheered on the tycoon and said Trump’s campaign was “epic.” As the segment came to a close, Trump told Jones, “Your reputation is amazing. I will not let you down.”

That was a stunning moment. A candidate seeking the Republican Party’s presidential nomination was hailing a man who claimed the last Republican president was part of a cabal that staged 9/11 (or purposefully allowed it to happen).

That was not the only Trump-Jones link during the campaign. Roger Stone, a self-proclaimed dirty trickster, longtime Trump adviser, and JFK assassination conspiracy theorist (who wrote a book saying LBJ killed Kennedy), often appeared on Infowars to tout Trump. And Trump tried to bolster his claim that Mexico was sending killers and rapists into the United States with an Infowars video he had seen on the Drudge Report.

At the GOP convention in Cleveland in July, Jones was the featured speaker at a pro-Trump rally organized by Stone.  (To be fair, I should note that at that rally, Jones picked me out of the crowd of reporters to denounce me as a representative of the “dinosaur” media.) And while in Cleveland, Jones attended the Republican proceedings as a “special guest.” (That’s what his credential said.) He and Stone also promoted “Hillary for Prison” T-shirts, which championed a message in sync with the “lock her up” chants inside the convention hall.

How deep Jones’ relationship with Trump goes is a vital question. Stone has claimed on Infowars that he set up Trump and Jones, the two “hit it off,” and Trump has “watched Infowars.” And during the campaign, Jones said he “personally talked to” Trump and encouraged him to claim the election was being rigged. On another occasion, Jones said Trump had told him that Jones had “one of the greatest influences I’ve ever seen…It’s greater than you know. Just know that your influence is second to none.” In a February 8, 2016, interview with Infowars, Trump senior policy adviser Stephen Miller hailed Jones and Infowars for having “been on top of…the immigration issue” and called on Jones’ audience to support Trump.

Media Matters, a liberal outfit, has pointed out that Trump has often aped Infowars material:

Trump has repeated Jones’ claims that President Obama and Hillary Clinton are the founders of ISIS; that Muslims were celebrating in New Jersey after the 9/11 attacks; and that the 2016 election would be “rigged” against him. Following his election, Trump also adopted the false claim promoted by Jones that “millions of people” “voted illegally” in the presidential election. Trump’s regular echoing of his rhetoric caused Jones to remark in August that it’s “surreal to talk about issues here on air and then word for word hear Trump say it two days later. It is amazing.”

Here was another example of a Trump-Jones mashup: At a rally in August, Trump said Clinton “took a little short-circuit in the brain—she’s got problems.” He added, “Honestly, I don’t think she’s all there.” A few days earlier Infowars had published a video, The Truth About Hillary’s Bizarre Behavior, that asked, “Is Hillary on the verge of a mental breakdown due to stress, or are her strange outbursts linked to a medical condition?” At other points, Trump campaign aides and Donald Trump Jr. tweeted out Infowars stories. The eldest Trump son spread an Infowars article claiming that Clinton had worn an earpiece during one of the presidential debates. Trump was undoubtedly the Infowars candidate.

“He’s a valuable asset—somebody has to rally the people around President Trump’s legislative program.”

After the election, Jones told his audience that Trump had called to thank him: Trump “gave me a call, and I told him, ‘Mr. President-elect, you’re too busy, we don’t need to talk.’ But we still spent over five minutes—he said, ‘Listen, Alex, I just talked to the kings and queens of the world—world leaders, you name it.’ But he said, ‘It doesn’t matter, I wanted to talk to you to thank your audience.” And Stone told the Washington Post that Jones would play an important outside role in the Trump presidency:  “He’s a valuable asset—somebody has to rally the people around President Trump’s legislative program.”

Jones was in the business of fake news before it was called fake news, promoting stories about FEMA camps, the Jewish mafia, weather weapons, and birtherism, and claiming Hillary Clinton was “demon-possessed.” In recent weeks, Jones has claimed that his relationship with Trump has continued, bragging that Trump has called him, that Trump’s two older sons watch his videos “every night,” that Trump asked him if he was happy with Trump’s performance as president, and that he talks “to people who talk to the president every day.” Stone also has said Trump and Jones “talk from time to time.” (Infowars reportedly is giving Stone his own show.) And Politico reported that Trump aides have used Infowars clips to show Trump examples of positive media coverage.

The real tale here is not Jones and his many false flags; it’s Trump’s embrace of Jones. There will always be connivers peddling fiction-as-truth to gain money and notice. What’s new—and most disturbing—is that the commander-in-chief of the United States has hooked up with such a figure and has taken steps that legitimize him. How much sway does Jones have with Trump? Jones’ boasts of his ongoing contacts with Trump and his team could be utterly bogus. Then again…

Kelly and other reporters could do the nation a true service by focusing on this angle and determining how far the Jones-Trump mind-meld has gone. If the two are still in cahoots, it’s a plot that deserves great scrutiny and all the hoopla a prominent and buzzy news show can generate.