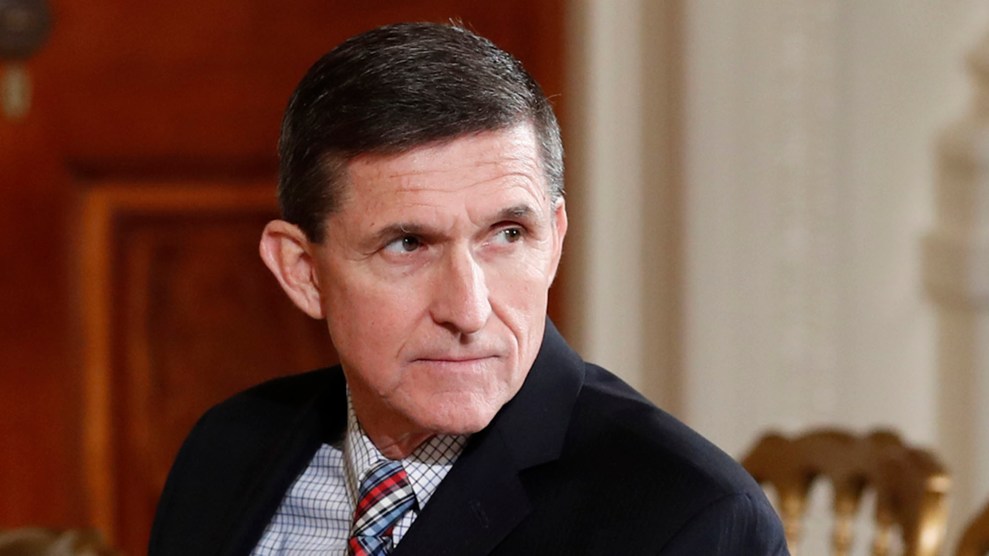 A Republican operative tried last year to obtain emails he thought were stolen from Hillary Clinton’s private server by Russian hackers, the Wall Street Journal reported Thursday. According to the Journal, the operative claimed he was working on the effort with retired Lt. General Mike Flynn, then a top adviser to Donald Trump’s presidential campaign.

The operative, Peter W. Smith—who spoke to the Journal days before his death this past May—also played a role in the 1990s scandal involving Arkansas state troopers’ claims that they helped arrange Bill Clinton’s trysts.

The Journal‘s report suggests a closer Flynn connection to what US intelligence agencies have said was the Kremlin-sponsored hacking and release of Democratic National Committee and Clinton campaign emails.

“I’m talking to Michael Flynn about this,” Smith told a security expert he tasked with searching hacker forums for people with access to Clinton’s emails, according to the Journal.

Flynn was briefly Trump’s national security adviser until he was fired after lying about contacts with the Russian ambassador. He could face prosecution for lying to the FBI, or in connection with allegations involving work his consulting firm did on behalf of Turkey’s government. Flynn’s firm advertised a “Special Operations Cyber Force” to potential clients, according to documents the firm filed.

The Journal reported that US intelligence agencies have learned that Russian hackers discussed how to obtain Clinton’s emails and “then transmit them to Mr. Flynn.”

A person who encouraged the transmission of information he or she knew to be illegally obtained through a hack could face felony charges for computer fraud and illegally transferring personal information, attorneys familiar with hacking cases told Mother Jones this week.

Federal law bars not only stealing but transferring personally identifiable information. Federal prosecutors have used the statute to prosecute unauthorized sharing of emails as well as email addresses.

That means a request for stolen emails could still be prosecuted (assuming anyone besides the late Smith was implicated) even if the request came after the hack, said Tor Ekeland, an attorney who represents defendants in federal hacking cases.

“It’s a mistake to assume the only potential crime is the hacking,” Ekeland said. “If you know that there’s been an illegal hack, and then you reach out to someone and say, ‘Give me that information,’ I want to disclose that,’ you’ve now got an attempt to transfer” personally identifiable information.

Former prosecutors and defense attorneys familiar with cases involving hacking said it is impossible to say what charges could be brought without knowing details of any cases, but they emphasized that the available statutes are broadly written.