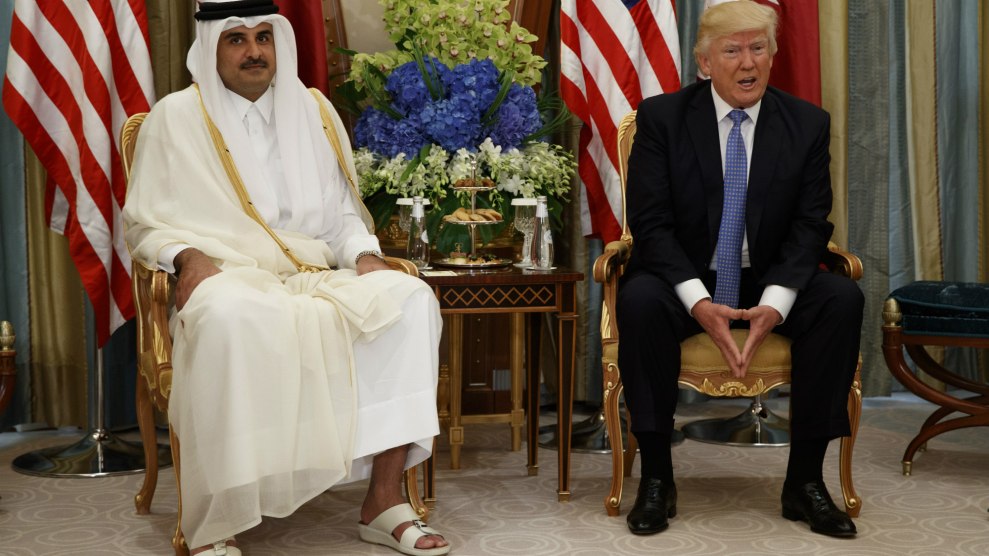 Donald Trump used his Tuesday morning Twitter tirade to cheer on moves by Saudi Arabia and its allies to isolate fellow Gulf state Qatar over its alleged support of terrorist groups, a development that has increased tensions in the region. And in his inimitable way Trump took credit for the Saudis’ actions. But the president quite recently was a big fan of Qatar. In fact, a few months before Trump announced his bid for president, he was touting plans to open one of his marquis hotels in the tiny Arab monarchy he is currently bashing.  And now there’s an important question for Trump and his White House to answer: what is the status of that project and might it affect his decisions related to this ongoing crisis in the Gulf?

In 2010, the Trump Organization was actively pursuing a hotel project in Doha, Qatar’s capital. And in October 2014, Trump’s company registered two companies to manage a prospective Trump hotel there. It’s not clear what has happened with the project, but a number of Trump’s other international projects have not materialized, including proposed hotels in Dubai, Saudi Arabia and China. But a month before he entered the presidential race, Trump retweeted an announcement highlighting his planned hotel for Doha.

In January, before taking office, Trump pledged that his company would not pursue any new foreign deals during his time in office. But his adult sons, who now run the day-to-day operations of his businesses, have said they plan to resurrect deals originally devised under their father’s guidance but which have laid dormant for years.

Ivanka Trump visited Qatar several times, including in March 2010 when she tweeted what she said was a picture of the sunrise in Doha. (The link to the picture no longer works.) In December 2010, shortly after it was announced that Qatar would host the 2022 World Cup soccer tournament, she told an Arab news outlet that she was excited about opening a new Trump hotel there and had spent a day meeting with potential partners. “I think the growth and development is visionary and outstanding, irrespective of that,” she said. “And I think once you layer [the World Cup] on, there’s going to be so much opportunity.”

In 2011, Ivanka Trump returned to Doha, and on Twitter she extolled the complimentary Qatar Airlines freebies she had received.

Trump himself visited Doha in 2008 and apparently left with a favorable impression. In October 2015, while on the campaign trial in New Hampshire, Trump regaled an adoring crowd with a story about his visit to Qatar’s airport, where he was given a personal tour by “one of the top people in Qatar,” who Trump said was “a wonderful guy.”

Trump told the audience that unlike Qatar’s airport—”the most beautiful one I’ve ever seen!” —airports in the United States were terrible.

The White House would not comment on the Trump project in Qater and any impact it might have on Trump’s decision-making. It referred Mother Jones to the Trump Organization. The company did not respond to a request for comment about the status of the hotel project.