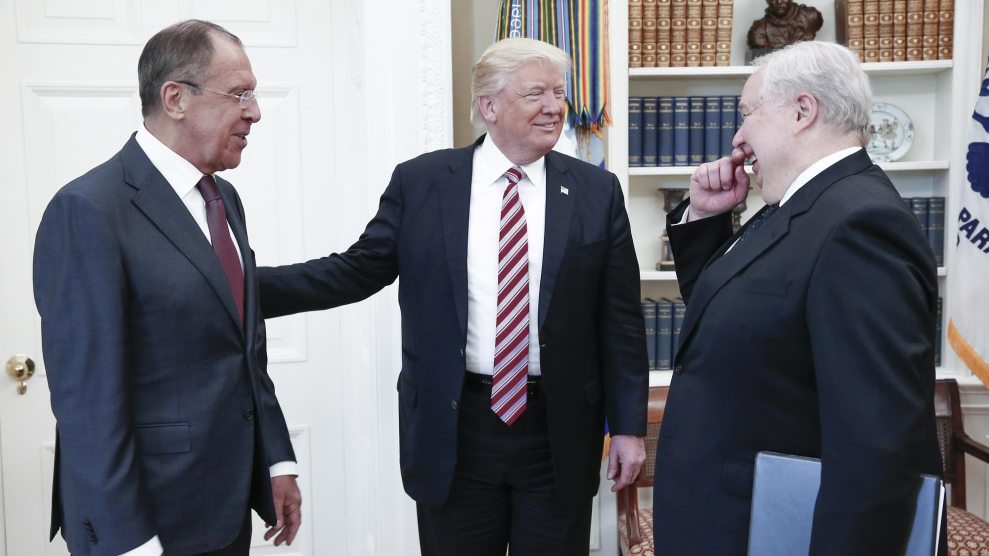 The concept is straight from the Soviet playbook: Plant false information and use it to influence the attitudes of another country’s people and government. This “active measures” technique from the Cold War era appears to have been resurrected with alarming success by the Kremlin in its attack on the 2016 presidential election—and has been echoed in tactics used by President Donald Trump and his associates, according to Clint Watts, a senior fellow at the Foreign Policy Research Institute.

“Part of the reason active measures have worked in this US election is because the commander in chief has used Russian active measures at times against his opponents,” Watts, a former FBI agent, recently testified to the Senate Intelligence Committee.

Key to this equation have been RT and Sputnik international, two Russian state-sponsored news outlets. Both reach only relatively small audiences in the US (RT is estimated to reach about 8 million people via cable television), but their impact has been magnified greatly online, with their stories reposted on what Watts calls “gray” conspiracy sites like Breitbart News and InfoWars. Twitter bots and other social media accounts further amplify the stories. And in several cases, Trump or his associates have directly cited phony Russian propaganda in a speech or interview. Here are some examples:

A false report of a terrorist attack at a NATO base in Turkey: Last July, RT and Sputnik each reported on a fire at the Incirlik base, framing it as potential sabotage. Pro-Russian and pro-Trump Twitter accounts spread and magnified the false reports, but mainstream news organizations didn’t pick up the report because it wasn’t true, as Watts explained in a piece for the Daily Beast. Yet, in mid August, Paul Manafort—Trump’s campaign chairman at the time—escalated the story to a terrorist attack, complaining on CNN that US media outlets were not adequately covering it. Politifact debunked Manafort’s claims, noting that Turkish authorities had reported small, peaceful demonstrations outside the base, but no actual assault on the base.

The case of the phony Benghazi email: On October 10, Wikileaks released a batch of emails hacked from campaign chairman John Podesta’s email account. About 5 pm ET that day, Sputnik News published a story about leaked Clinton campaign emails with the headline “Hillary confidante: Benghazi was ‘preventable’; State Department negligent.” Roughly an hour later, Trump told supporters at a rally in Pennsylvania that Clinton ally Sidney Blumenthal had called the Benghazi attack “almost certainly preventable.” “This just came out a little while ago,” Trump said. Those words weren’t actually Blumenthal’s and Sputnik later deleted the story – but by then the headline had spread far and wide.

False claims of pervasive voter fraud: RT has been attempting to delegitimize the American electoral process since 2012 by calling the U.S. voting system fraudulent, according to the declassified version of the report the Director of National Intelligence released this past January. In his Senate testimony, Watts called this the “number one theme” pushed by Russian outlets. In October 2016, a Kremlin-controlled think tank circulated a strategy document that said Russia should end its pro-Trump propaganda “and instead intensify its messaging about voter fraud to undermine the U.S. electoral system’s legitimacy and damage Clinton’s reputation in an effort to undermine her presidency,” according to a Reuters investigation.

That same month, Trump pushed hard on the theme that the election was rigged; on Oct. 17 Trump tweeted “Of course there is large scale voter fraud happening on and before election day.” The sources his campaign pointed to were all debunked by Politifact, which noted that Trump had also tweeted in 2012 about dead voters delivering Obama’s win.

The Swedish attack that wasn’t: Trump’s strategy of running with false information didn’t stop when he won the election – and hasn’t been limited to Russian-owned media properties: He’s also used Fox News reports in a similar way. In February, Trump appeared to imply at a Florida rally that a terrorist attack had occurred the previous night in Sweden. Sweden itself had no idea what he meant and the Swedish Embassy reached out to ask for clarification. Twitter users, including many Swedes, ridiculed Trump’s statement, with references ranging from IKEA to the Swedish Chef character from the “Muppets.” Trump later said that he was referring to a Fox News story on violence allegedly perpetrated by refugees. That report, which aired the night before Trump’s rally, did not mention a specific terror-related attack; it focused on reports that rape and gun violence had increased since Sweden began taking in a record number of refugees in 2015.

Wiretapping claims pushed by a Fox News personality: In March, even though Trump’s claim about Obama wiretapping Trump Tower had been directly debunked by top US intelligence officials, the president seized on a baseless claim by Fox News analyst Andrew Napolitano that British spies had wiretapped Trump at former President Obama’s request. Fox News later disavowed Napolitano’s statement. Trump continued to repeat his conviction that he’d been wiretapped, even though American and British intelligence officials insist there is no basis for the claims.

The murder of DNC staffer Seth Rich: Trump allies recently pushed another story that started as a conspiracy theory online and was fueled by Russian news outlets. Fox’s Sean Hannity aired several segments focusing on the unsubstantiated claim that Rich was behind the Clinton campaign email leaks and then murdered for his actions, even though police have said he was likely killed in a robbery attempt. When the claims were thoroughly debunked, Fox retracted the story from its website – but not before it had been spread by Trump ally and former House Speaker Newt Gingrich. Even after Fox pulled the story, Gingrich told the Washington Post, “I think it is worth looking at.”

In his Senate testimony, Watts noted that Trump is vulnerable to further manipulation by the Russians: He warned that Russian-linked Twitter accounts are actively trying to engage the president by sending him conspiracy theories. “Until we get a firm basis on fact and fiction in our own country, get some agreement about the facts,” Watts said, “we’re going to have a big problem.”