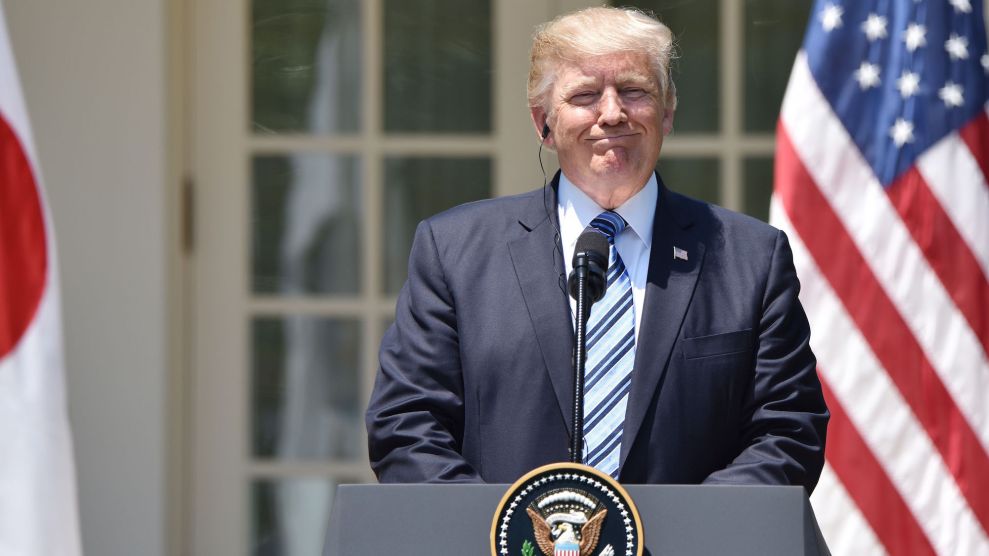 In response to Donald Trump’s bizarre tweet-attack on them, MSNBC’s Joe Scarborough and Mika Brzezinski on Friday claimed on their Morning Joe show and in a Washington Post column that senior White House officials had repeatedly warned them that the National Enquirer would publish a negative article about the pair unless they apologized to Trump for their critical coverage of him. If they did so, they were told, Trump, who is a close friend of the tabloid’s owner, David Pecker, would have the story spiked.

Whether they realized it or not, Scarborough and Brzezinski were accusing the president and his aides of committing an action that might have been a crime. Several attorneys say the White House officials who called Scarborough to convey the threat—and Trump himself—might have broken a federal extortion law, as well as a blackmail law and a New York state law against extortion or coercion. This episode may be far more serious than yet another Trump Twitter feud.

“We got a call that, ‘Hey, the National Enquirer is going to run a negative story about you guys,'” Scarborough said on the show. “And they said, ‘If you call the president up and you apologize for your coverage then he would pick up the phone and basically spike this.’…The calls kept coming and they were like, ‘You need to call, please call.'” Scarborough did not identify the aides who pressed him to apologize.

New York, where Morning Joe is shot and where Scarborough and Brzezinski live, outlaws multiple kinds of coercion. Second-degree coercion, according to the state’s criminal code, “occurs when a person compels another person to engage or refrain from engaging in lawful conduct by instilling a fear of” several actions, including “exposing a secret about the victim subjecting him or her to ‘hatred, contempt or ridicule.’” This does seem to fit the circumstances Scarborough and Brzezinski described: If they did not do what the White House aides requested, the publication owned by a pal of Trump’s would disclose secret information that would harm their reputations.

“One could certainly argue coercion,” says Matthew Galluzzo, a defense lawyer who previously worked as a prosecutor for the New York County District Attorney’s office. “If you assume those facts to be true, there could be a coercion charge.”

Ted Williams, a criminal defense attorney in Washington, DC, echoes this view. “This case could very well be extortion,” he says. “If these are the facts, you have the president of the United States colluding with a newspaper based in Florida and its owner to make certain things happen with a threat. It is a strong possibility that an extortion case can be made, and also a conspiracy case should be looked at. Here was a threat: You kiss the brass ring or you are exposed. I would hope the FBI would get involved.”

Williams adds that a criminal case could also include wire fraud. “When certain communications are transmitted over phones and other apparatuses for blackmailing two television personalities to help the president of the United States, that could lead to such a charge,” he says.

Other attorneys contend that White House officials might have broken a federal statute that makes it a felony for a US government employee to commit extortion, which is defined in the federal code as “wrongful use of actual or threatened force, violence, or fear” to compel a person to give up property or something of value.

If the White House aides did indeed tell Scarborough and Brzezinski that the National Enquirer would smear them unless they laid off Trump on their show, “that [would] be a crime,” Harvard Law Professor Laurence Tribe tweeted Friday. In a follow-up tweet, Tribe, a prominent Trump critic, added, “If Trump told staffers to extort, he too has committed that serious crime.”

Of course, lawyers will differ. Responding to Tribe on Twitter, prominent attorney Alan Dershowitz said, “Threatening to smear someone who smears him is not extortion. If it were prisons w/d be more overcrowded. Jefferson w/d have been imprisoned.”

The feud continued online Friday. Trump claimed in a tweet that Scarborough “called me to stop a National Enquirer article.” Trump said he refused. (The president did appear to confirm that there had been communication between the White House and Scarborough about this matter.) Scarborough responded that the president’s claim was “another lie.”

Addressing Trump, Scarborough maintained, “I have texts from your top aides and phone records. Also, those records show I haven’t spoken with you in many months.”

Also on Friday, the Enquirer published what appears to be the negative article to which Scarborough and Brzezinski had referred: a thinly sourced piece claiming that the couple, who are now engaged, had become romantically involved before each had divorced his or her spouse.

Scott Altman, a University of Southern California Law School professor and expert on blackmail law, says that before the Enquirer article appeared, he was “very skeptical” that the threats the hosts described constituted blackmail under federal law. “Threats to communicate information count as blackmail only if they are threats to reveal secret facts that would subject someone to ridicule if revealed, or to reveal photos of videos of a person engaged in sexual acts or without clothing,” he explains. A general threat to make negative comments about someone or to cause the publication of a derogatory article, he adds, “likely does not meet this requirement.”

But Altman says the appearance of the gossipy Enquirer story bolsters the case that Trump aides, in Scarborough’s telling, did threaten to reveal facts that invite ridicule—and that action could be prosecutable. “If in context the threat could plausibly be read to refer to that information [in the published article], I think a case for blackmail would be much stronger,” he says.

Williams notes that if Scarborough and Brzezinski had gone to the feds before disclosing this episode, the FBI could have been in a position to mount a sting operation. “You could see if the president would take a call from Mika and Joe, and you could then corroborate what they are claiming,” he says. And, he adds, White House calls to Scarborough should be traceable by investigators to determine if such conversations occurred. “Then you put them before a grand jury,” he says, “and watch how they sing.”