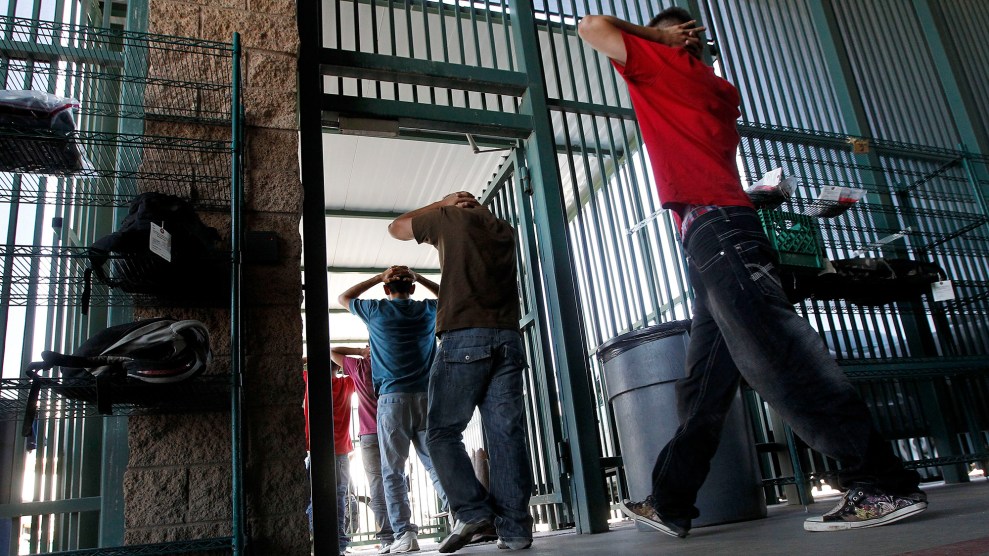 Immigrants who crossed the border illegally are processed at Border Patrol headquarters in Tucson, Arizona, in 2012.Ross D. Franklin/AP

On a scorching June morning, nearly 50 immigration detainees shackled at the feet, the waist, and the wrists shuffle into the federal courthouse in Tucson, Arizona. Inside the courtroom, they sit down in rows of seven. Some are in street clothes, others in blue jumpsuits. They’ve all been strip-searched before reaching the courthouse. They’ll be strip-searched again after being sentenced. Many will be strip-searched once again before they get to the federal prison where they will serve their sentences before being deported.

The men are here to be funneled through Operation Streamline (OSL), a fast-track prosecution program that charges and sentences as many as 70 border crossers in this courtroom in a single day. They have agreed to plead guilty to the crime of entering the United States illegally, knowing that it carries a predetermined prison sentence followed by mandatory deportation. Typically, the whole process is over within a couple of hours. Critics call it “assembly-line justice.”

Inside the courtroom, Judge Eric J. Markovich tells the defendants what to expect. “It is my understanding that after meeting with your attorney you have all decided to accept the government’s plea offer,” he begins. Under federal law, first-time illegal entry is a misdemeanor that carries a maximum sentence of six months in prison. It’s a felony for repeat offenders, carrying up to two years’ prison time. However, Streamline’s plea agreements reduce all felony reentry charges to misdemeanors, and cap prison sentences at 180 days. “It requires you to plead guilty to the misdemeanor offense, serve the amount of prison time stated in your plea agreement, and the government will dismiss that more serious felony against you,” says Markovich. He adds, “You are giving up your right to appeal or challenge in any way the duration of your sentence.”

“There is no individualized sentencing. It feels like ‘McJustice.'”

The immigrants listen to a Spanish translation of the judge’s remarks on headsets. If they speak an indigenous language, they may have a hard time understanding what is happening. Five detainees are brought before the judge. With the docket in hand, he begins questioning the first man in line. “Mr. Hernandez-Solorio: Sir, are you thinking clearly today and are you pleading guilty voluntarily of your own free will?” he asks.

“Other than what’s in your plea agreement, have any promises been made to you to get you to plead guilty, or have you been forced or threatened to plead guilty?”

“Do you understand the charges against you and the maximum penalties of your plea agreement?”

The defense attorneys stand behind their clients. One fans himself with his paperwork. A half dozen or so US Marshals and Border Patrol agents have their faces in their phones, are quietly telling jokes, or are zoning out entirely.

“Is it true that you are not a citizen or national of the United States and on June 11 of this year you entered the United States near Douglas, Arizona, without going through a port of entry?” Markovich continues.

“And sir, how do you plead to the misdemeanor—guilty or not guilty?”

“Sir, your sentence is the 60 days you agreed to and the felony is dismissed.”

The questioning takes approximately one minute. Markovich looks at the next man in line, then at the docket, and says, “Okay. Mr. Galaviz-Armenta. Sir, are you thinking clearly today and are you pleading guilty of your own free will…”

First launched in southern Texas in 2005, Streamline began as a part of a zero-tolerance policy enacted by President George W. Bush that required illegal border crossers in certain areas to be sent to federal criminal courts rather than civil immigration courts. Anyone the Border Patrol picked up in a targeted zone near the border could be sent to Streamline; it didn’t matter if it was their first entry or their fortieth. Under President Barack Obama, the program ballooned. Criminal immigration prosecutions doubled over his two terms, accounting for more than half of all federal criminal prosecutions last year. In the 2013 fiscal year, federal prosecutions of illegal entry into the country peaked at more than 90,000.

Whether Streamline deters people from trying to cross the border again is debatable. “The stated purpose is to deter people from entering the United States,” Markovich later tells a group of observers who visited his courtroom. His tone suggests he’s not entirely convinced. “If you read criminological, clinical studies of how people think, deterrence comes much more from the certainty or the probability of getting caught, and much less the gravity of the sentence,” says Joel Parris, a defense attorney who regularly represents Streamline clients. “For the average guy coming from Mexico, fear of the Border Patrol is not near as much as fear of the cartels. I don’t think there’s a significant deterrent effect there, given the real pressures that these people face.”

Back in the courtroom, Markovich continues with the same questions, receiving the same answers, until the first group of 22 detainees is complete. Some are sentenced to 30 days in prison. Some get 60, others 90. A few get 180 days, indicating that either they had illegally reentered the country many times or have a criminal record in the United States. A second group of 24 detainees is made up of men who were caught entering the United States for the first time, most within the past day or two during an unusually brutal heatwave. In return for pleading guilty, they will receive a sentence of time-served and will be deported. Before wishing them luck, Markovich warns them that this will go on their record; the next time they’re caught, they will get federal prison time.

“I don’t think there’s a significant deterrent effect there, given the real pressures that these people face.”

“There is no individualized sentencing,” says Grant Bashore, an assistant federal defender in Tucson. “A sentence is imposed that is negotiated prior to the defense lawyer even being appointed to the case. It is negotiated by a prosecutor and a Border Patrol officer, looking at a file and determining, ‘This is a fair number for this guy.’” In Tucson, the federal prosecutor in Streamline cases is Chris Lewis, a Border Patrol employee who has been deputized to represent the government. He wears an olive green sports coat that’s the same color of Border Patrol uniforms. “The defense lawyer’s function becomes a simple pitch that says, ‘You’re crazy if you don’t take this deal, because otherwise they’re going to prosecute with a felony and you’re going to end up doing more time,’” says Bashore. He says this system is “demoralizing” for defense attorneys. “It feels like ‘McJustice.’”

Defense attorneys get a half-hour with each Streamline client before court begins. It’s a lot more than what they used to get, and it is sufficient to explain the procedure, says Parris. But it’s nowhere near enough time to address the complexities of some defendants’ individual experiences. “Compared to what I’ve seen before, it is better. I don’t feel like anyone is railroaded,” he says. But, he adds, “It’s an expedited process. If mistakes are to be made, it’s when you’re going fast. Judges can get used to sentencing people as if they are units in a box.”

Immigrant advocates say the Streamline system is not only impersonal, but unnecessarily harsh. “We had one woman who was prison for a month after being in Streamline,” recalls Joanna Williams, the director of education and advocacy for the KINO Border Initiative, a humanitarian assistance organization that operates on both sides of the US-Mexico border. “She came to us and she still had bruises on her wrists and on her legs” from the shackles. “She asked them to loosen the chains, and they tightened them more.” Williams says that many Streamline defendants are bewildered by the experience of being treated like criminals. “They don’t understand how they’re in a federal prison with somebody who has been selling drugs on the street.” Strip searches are particularly humiliating. “It’s a group of them all being strip-searched at the same time. In Mexico, they’ve never been naked sometimes in front of even their own family. There’s so much shame associated with nudity, especially people from small towns.”

Advocates also worry that refugees are getting caught up in the Streamline system and being deported before they receive a “credible fear” interview, which is required by US and international law to determine whether they may seek asylum in the United States. A 2015 report by the Department of Homeland Security’s Office of Inspector General also raised this concern, arguing that putting asylum seekers through Streamline “may violate U.S. treaty obligations.”

Recently, Williams received a tip about a man in Streamline who had asked for asylum at the port of entry in Tijuana. “He was fleeing persecution and was with his whole family. A CBP [Customs and Border Protection] officer said, ‘You know, the judge is tired of all these things and doesn’t want to hear it. You should go back and apply for a tourist visa.’” The man went back to Mexico, unsuccessfully applied for a tourist visa and then tried to cross the Arizona desert only to be detained, sent to Streamline, and charged with illegal entry. “So he now had a misdemeanor,” says Williams, which will make it harder for him to request asylum if he ever tries again.

No one involved in Streamline seems optimistic that the system will be improved anytime soon. “I look at the future of immigration now and there are dark days ahead,” says Markovich after court ends for the day. “This isn’t going to go well. Even under Obama you couldn’t get anything done on immigration. The next few years are going to be bad.”