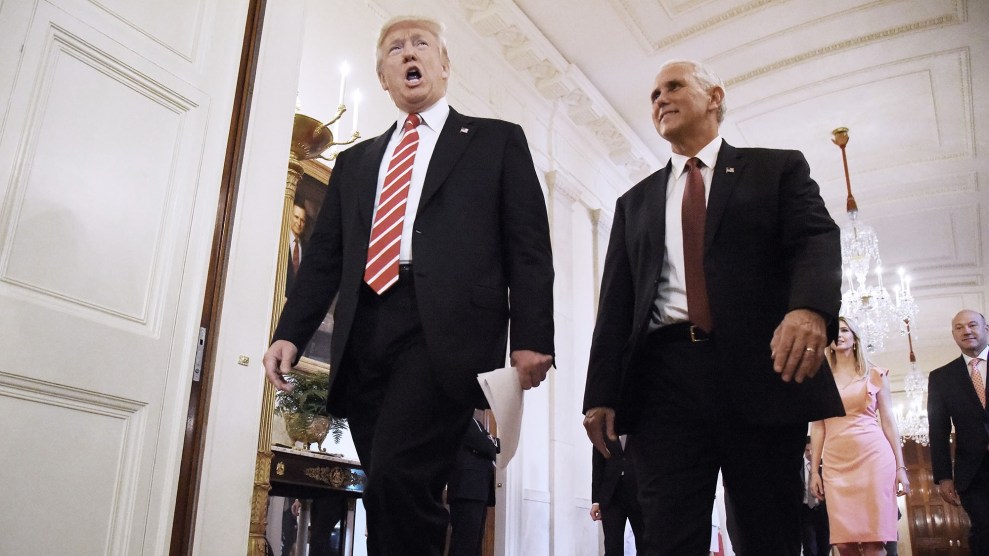 Two groups filed lawsuits against the Trump administration in federal court on Monday, alleging that his election commission is violating federal law by operating without transparency.

The American Civil Liberties Union filed a suit against President Donald Trump, as well as his commission and Vice President Mike Pence, who chairs the body. The Lawyers’ Committee for Civil Rights Under Law, a legal and civil rights nonprofit, filed a separate suit against multiple members of the administration and commission.

Shortly after becoming president in January, Trump claimed that 3 to 5 million people had voted illegally and promised to create a commission on the integrity of the voting system, ostensibly to prove his unfounded claims of mass fraud. In May, Trump signed an executive order creating this commission. He named Vice President Mike Pence as the group’s chair and Kansas Secretary of State Kris Kobach, who is known as a crusader against voter fraud despite evidence that it is virtually nonexistent, as vice chair. In June, the commission created an uproar when Kobach sent letters to all 50 states requesting extensive personal information from states’ voter files. Nearly all states have refused to comply in full with the request.

“The commission held its first meeting without notice or making it open to the public,” Theresa Lee, a staff attorney with the ACLU’s Voting Rights Project, said in a press release announcing the group’s suit. “This process is cloaked in secrecy, raising serious concerns about its credibility and intent. What are they trying to hide?”

The ACLU alleges that the commission is violating the Federal Advisory Committee Act, passed in 1972 to create guidance and public accountability for these committees, in two ways. First, the complaint claims that the commission is violating the requirement that committees hold their meetings publicly and make their meeting notes and other materials public. The commission’s first and only meeting so far, the ACLU notes, was not available to the public and took place without prior public notice. The second meeting, the complaint says, “is now scheduled to take place in a building generally inaccessible to the public, and none of the documents already relied upon by the Commission have been made available to the public.”

The ACLU also alleges that the membership of the commission violates the same law, which stipulates that membership be “fairly balanced in terms of the points of view represented.” According to the ACLU, of the initial six appointees to the committee, at least four “have a record of making exaggerated and/or baseless claims about voter fraud, and/or have implemented or supported policies that have unlawfully disenfranchised voters.” Among them is Kobach, who has erected roadblocks to registering to vote in his state and created a interstate system called Crosscheck to find people registered in more than one state. The program has been criticized for generating false positives and causing legitimate voters to be removed from the rolls.

The Lawyers’ Committee for Civil Rights Under Law is asking the court for a temporary restraining order to halt the commission’s next meeting, scheduled for July 19, until the commission makes its records and meetings available to the public.

A spokesman for the vice president did not immediately respond to a request for comment.

This story has been updated to include the lawsuit from the Lawyers’ Committee for Civil Rights Under Law.