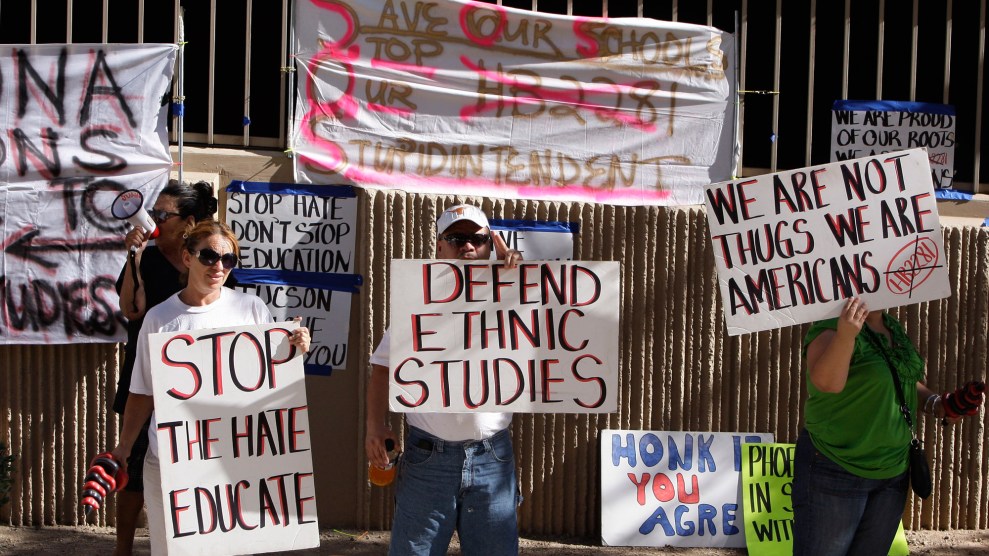 Update, August 23, 2017: On Tuesday, a federal judge declared that Arizona’s 2010 ban of the Tucson school district’s Mexican-American Studies program was unconstitutional and enacted with discriminatory intent. In a 42-page ruling, US district judge A. Wallace Tashima found that the state’s actions “were motivated by a desire to advance a political agenda by capitalizing on race-based fears.” A hearing will take place within weeks to decide how the ruling will be enforced.

Specifically, the bill set out to ban courses that “promote the overthrow of the United States government,” “promote resentment toward a race or class of people,” “are designed primarily for pupils of a particular ethnic group,” or “advocate ethnic solidarity instead of the treatment of pupils as individuals.” Only one program in one school district qualified to be shut down: the Mexican American studies program in the Tucson Unified School District.

Since then, parents and students from the district have protested HB 2281. This week, attorneys on behalf of Tucson students argued in federal district court that the state violated Latino students’ constitutional rights—and that the law should be tossed out.

When did the Tucson program start?

The Mexican American studies program first started in 1998, partly in response to a long-standing desegregation order against Tucson’s school district in which black and Latino parents claimed that the district’s make-up promoted “intentional segregation and unconstitutional discrimination on the basis of race or national origin.”

Tucson’s program aimed to offer a curriculum through the lens of the Mexican American experience, driven by works of Mexican American authors and other writers of color, as a way to narrow the academic gaps between Latino students and their peers.

Curtis Acosta, a former teacher at Tucson High Magnet School and one of the program’s founders, testified earlier this week the program was meant to build confidence in students who didn’t engage in a traditional curriculum.

Ethnic studies courses, which first arose at universities during the civil rights movement, have been expanding into high schools in recent years. In California, for instance, Gov. Jerry Brown signed a bill last year that called for the development of a model curriculum for ethnic studies in high schools throughout the state.

How did the Tucson program fare?

Over the next 13 years, the program expanded, enrolling about 1,300 students in courses in elementary, middle, and high schools at its height in 2010. A state-commissioned audit in 2011 recommended, among other things, maintaining and expanding the program. And participation in the courses paid off for students: A 2012 study by University of Arizona professor Nolan Cabrera found that students who participated in the program’s courses performed better on state tests and graduated at higher rates.

How did it become so controversial?

The crusade against the Mexican American studies program goes back to 2006 when labor rights activist Dolores Huerta gave a speech to students at Tucson High Magnet School. She called on students to look at the immigration legislation arising at the time and address why “Republicans hate Latinos.”

The comment stuck with Thomas Horne, then the superintendent of public instruction for Arizona’s Department of Education. When students weren’t allowed to ask questions at a meeting with Horne’s deputy, some raised their fists and turned their backs in protest. In an open letter to Tucson residents following the speech, Horne criticized the Mexican American studies program for teaching students “a kind of destructive ethnic chauvinism” and blamed teachers for the students’ actions.

In 2010, the same year Arizona lawmakers passed an infamous anti-immigration law, SB 1070, a Republican-controlled legislature passed HB 2281. That October, a group of teachers sued the state, alleging that the elimination of the program violated their First Amendment rights.

On his last day as state superintendent in January 2011—and right before he officially became state attorney general—Horne announced that the Tucson program violated state law and ordered that the district terminate the program or else lose 10 percent of state funding.

John Huppenthal, a state senator who helped pass the law, emerged as Horne’s successor. Despite an independent audit in 2011 that found “no observable evidence” the Mexican American studies program violated Arizona law, Huppenthal rejected the finding. After a second investigation, he stated the program violated state law and threatened to withhold state funding from Tucson’s school district for failing to end the program. In January 2012, in the wake of sanctions, the school board voted to end it and physically confiscated books from schools.

What’s at stake in this case?

The case focuses on the intent of state officials when they implemented the law. In 2013, District Judge A. Wallace Tashima, who is hearing the case again, upheld most of the 2010 law, arguing that the students involved failed to show that it was passed with discriminatory intent. Two years later, a federal appeals court in San Francisco disagreed and ordered the case back to trial, concluding that there was enough evidence to determine otherwise.

In court this week, Huppenthal denied his actions in enacting the law were made with discriminatory intent. “I never anticipated that the program would collapse,” Huppenthal testified  Wednesday. He refused to apologize for inflammatory remarks he made anonymously on different websites before and during his time as state superintendent: Under different pseudonyms, Huppenthal lambasted the program’s teachers, likening them to the Ku Klux Klan and saying the classes “use the exact same technique that Hitler used in his rise to power,” according to court documents.

At one point during testimony, Huppenthal described the fight over the ethnic studies program as “eternal,” adding that “the battle between collectivism and individualism defines the human race,” the Huffington Post reported. The trial will come to an end in mid-July.