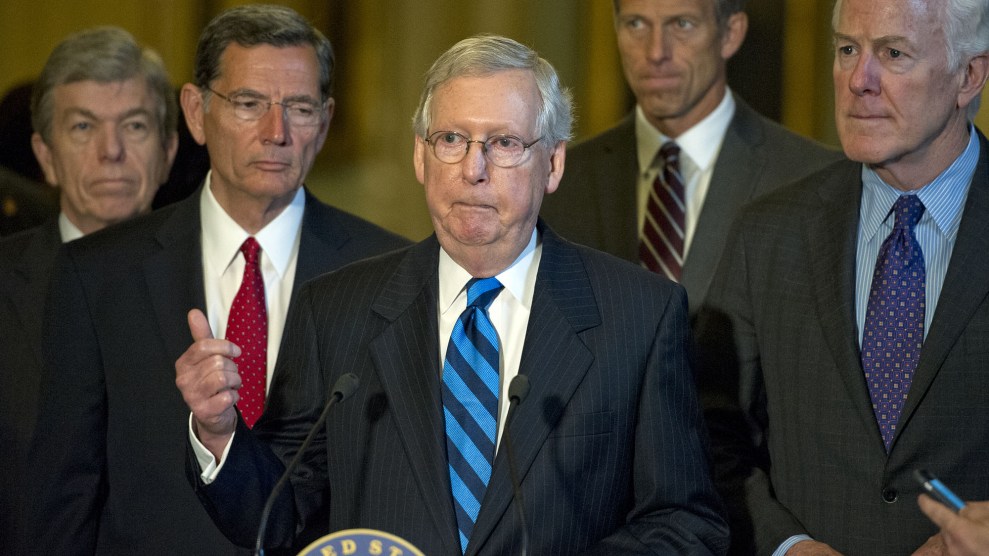 Senate Republicans’ plans to dismantle Obamacare appear to be quickly crumbling. After a group of senators announced their opposition to the current version of the bill Monday night, Senate Majority Leader Mitch McConnell (R-Ky.) conceded defeat. McConnell said that legislation—which would have replaced Obamacare with a less generous health care program while dramatically cutting Medicaid—won’t be moving forward.

Getting rid of Obamacare without any replacement policy would be an utter disaster that would instantly wreck the insurance market.

Instead, McConnell pledged to introduce a bill that would simply repeal huge chunks of Obamacare without any sort of replacement; congressional Republicans passed similar legislation in 2015, but it was vetoed by President Barack Obama. The bill would have a two-year delay before implementation, offering a grace period during which Congress could theoretically dream up a replacement plan.

But McConnell’s new plan quickly encountered trouble Tuesday morning, with GOP Sens. Susan Collins (Maine), Shelly Moore Capito (W. Va.), and Lisa Murkowski (Alaska) all saying they couldn’t support a bill that just repeals Obamacare. “As I have said before, I did not come to Washington to hurt people,” Capito said in a statement explaining her opposition. That would be enough to kill the bill, assuming every Democrat opposed it, as well. Meanwhile, Sen. Rob Portman (R-Ohio) said he still needed to see the language of the bill and indicated he was “concerned” about any bill that “would simply repeal.”

There’s good reason why Collins, Capito, Murkowski, and Portman are quickly objecting to McConnell’s repeal-only plan: Getting rid of Obamacare without any replacement policy would be an utter disaster that would instantly wreck the insurance market. Republicans are using a procedure called budget reconciliation that would allow them to avoid a filibuster and pass the bill with just 50 votes in the Senate. But the reconciliation process comes with a set of byzantine rules that limits what can actually be included in the legislation. When Republicans tried to do this in 2015, their bill would have eliminated Obamacare’s Medicaid expansion, subsidies for lower-income families, and the individual mandate. But it would have left in place most of Obamacare’s regulations. Under the 2015 bill, insurance companies would still be required to offer a range of essential health care benefits without charging higher rates for sick people—but without financial support from the government or any requirement for healthy people to buy in. That would result in a so-called “death spiral”: Healthy people will stop purchasing coverage, which will cause premiums to rise, which will cause more people to stop buying insurance, which will cause premiums to rise even further.

Capito, Murkowski, and Portman actually supported the 2015 bill, but it was a much easier vote, since they knew Obama would never sign it into law. But while it was engineered as a show vote back then, the Congressional Budget Office took the bill seriously and wrote a damning analysis earlier this year explaining what it would do to the country’s health system. The CBO concluded that the uninsured rate would immediately skyrocket, rising by 18 million under the first year after the repeal went into effect. By year three, 27 million more people would be uninsured than under Obamacare. That number would rise to 32 million by 2026. By that point, the individual marketplaces would have imploded, with 75 percent of people living in a part of the country without an insurance provider offering individual coverage. And even if you are lucky enough to still have an insurer offering plans, the cost will be far, far higher. In the first year alone, premiums would jump between 20 to 25 percent compared with current law, according to the CBO.

Even if McConnell does attempt to use reconciliation to eliminate the essential health benefits and preexisting-condition protections, the repeal bill would likely be catastrophic. In that scenario, the insurance market would revert back to the way it was prior to Obamacare, where people with preexisting conditions couldn’t get any coverage, low-income families couldn’t afford coverage, and everyone else bought plans with skimpier benefits.