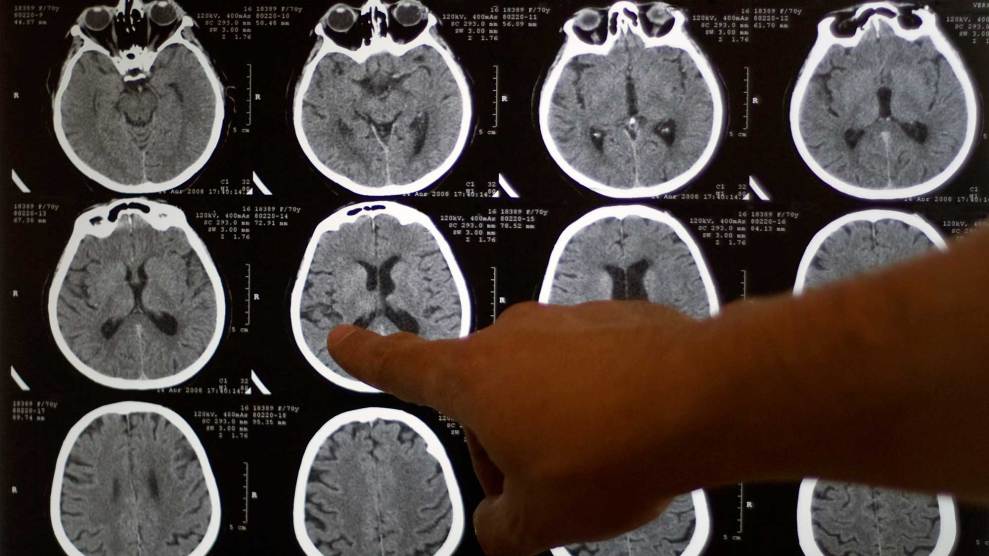 With its bright colors, anthropomorphic animal motif, and nautical-themed puzzle play mat, Dr. Kimberly Noble’s laboratory at Columbia University looks like your typical day care center—save for the team of cognitive neuroscientists observing kids from behind a large two-way mirror. The Neurocognition, Early Experience, and Development Lab is home to cutting-edge research on how poverty affects young brains, and I’ve come here to learn how Noble and her colleagues could soon definitively prove that growing up poor can keep a child’s brain from developing.

Noble, a 40-year-old from outside of Philadelphia who discusses her work with a mix of enthusiasm and clinical restraint, is among the handful of neuroscientists and pediatricians who’ve seen increasing evidence that poverty itself—and not factors like nutrition, language exposure, family stability, or prenatal issues, as previously thought—may diminish the growth of a child’s brain. Now she’s in the middle of planning a five-year, nationwide study that could establish a causal link between poverty and brain development—and, in the process, suggest a path forward for helping our poorest children.

Noble is planning a five-year, nationwide study that could establish a causal link between poverty and brain development—and, in the process, suggest a path forward for helping our poorest children.

It’s the culmination of years of work for Noble, who helped jump-start this fledgling field in the early 2000s when, as a University of Pennsylvania graduate student, she and renowned cognitive neuroscientist Martha Farah began exploring the observation that poor kids tended to perform worse academically than their better-off peers. They wanted to investigate the neurocognitive underpinnings of this relationship—to trace the long-standing correlation between socioeconomic status and academic performance back to specific parts of the brain. “There have been decades of work from social scientists, looking at socioeconomic disparities in broad cognitive outcomes—things like IQ or high school graduation rate,” she says. “But there’s no high school graduation part of the brain.”

Prior to their study, scientists had never investigated the specific cognitive tasks (i.e., face learning, picture learning, vocabulary tests) in which poor children underperformed, let alone mapped out how their brain structure and development might differ. So in 2005, Noble and Farah, along with University of Pennsylvania colleague Frank Norman, recruited 60 children from Philadelphia public school kindergartens (30 middle-class kids and 30 who were at or just above the poverty line) and gave them a series of cognitive tests, each of which has been linked to a specific brain circuit. Among other things, the tests measured language development and executive functioning—the set of mental processes responsible for working memory, reasoning, and self-control. It turned out that low-income children performed moderately to significantly worse than their middle-class peers in both areas.

The results, which Noble and Farah reported in a 2005 paper, were the beginning of what they call a “neurocognitive profile” of socioeconomic status and the developing brain. Farah, Noble, and other scientists soon began using magnetic resonance imaging (MRI) scans to examine the brains of children across the socioeconomic spectrum. The results were striking. In one study Farah looked at 283 MRIs and found that kids from poorer, less-educated families tended to have thinner subregions of the prefrontal cortex—a part of the brain strongly associated with executive functioning—than better-off kids. That could explain weaker academic achievement and even lower IQs.

The data indicated that small increases in family income had a much larger impact on the brains of the poorest children than similar increases among wealthier children.

In 2015, Noble co-authored the largest study to date. Using MRI, researchers examined 1,099 children and young adults and found that the brains of those with higher family income and more parental education had larger surface areas than their poorer, less-educated peers. The strongest correlation came in brain regions associated with language and executive functioning. What’s more, the data indicated that small increases in family income had a much larger impact on the brains of the poorest children than similar increases among wealthier children. And Noble’s data also suggested that when a family falls below a certain basic level of income, brain growth drops off precipitously. Children from families making less than $25,000 suffered the most, with 6 percent less brain surface area than peers in families making $150,000 or more.

A few months later, another large study co-authored by Seth Pollak, a child psychologist at the University of Wisconsin-Madison, found strong ties between household income and the volume of gray matter in the frontal lobe, temporal lobe, and hippocampus. Children from households below the federal poverty line ($24,250 for a family of four in 2015) had 8 to 10 percent less gray matter in these critical regions. And even kids whose families were slightly better off—incomes of one and a half times the federal poverty level—had 3 to 4 percent less gray matter than the developmental norm. In Pollak’s study, many of the poor parents were highly educated, indicating that the “maturational lags” their children suffered from were a direct result of the circumstances of poverty.

The policy implications are immense. If the data holds, simply moving a family’s income out of poverty might be enough to get that child much closer to cognitive developmental norms. And while we don’t yet know whether or how much these brain disparities persist into adulthood, this research—combined with past work demonstrating that people raised in poverty end up doing worse financially and suffering greater health problems than their more-affluent contemporaries over the course of their lifetimes—suggests they probably have lifelong effects.

If the data holds, simply moving a family’s income out of poverty might be enough to get that child much closer to cognitive developmental norms.

These studies indicate that it isn’t one specific factor that’s solely responsible for diminishing brain growth and intellectual potential, but rather the larger environment of poverty. “I would say that we have strong correlational evidence at this point, but we don’t really have the causal evidence yet,” Noble says. And that’s where Noble’s upcoming study fits in. To prove causality, she and several other researchers—Greg Duncan, an economist at the University of California-Irvine; Katherine Magnuson, a social-policy expert at the University of Wisconsin-Madison; Lisa Gennetian, a New York University economist; and Hirokazu Yoshikawa, an NYU psychologist—are developing a nationwide study that will include 1,000 low-income families. The families will be divided into two groups; one will receive a cash payment of $333 a month ($4,000 a year), and the other $20 a month. As Noble mentioned in an op-ed in the Washington Post, past research has shown that an increase of $4,000 in family income during the first years of a child’s life is associated with greatly improved outcomes in adult earnings, employment, and physical health. Based on their findings, Noble and her collaborators believe it is also enough to significantly improve brain development.

The study will take five years to complete, with payments beginning shortly after the mothers give birth and lasting until the children turn three years old. Researchers will collect data through interviews with the mothers at 12 and 24 months, and after the children turn three, they will visit the participating labs where researchers will test their language, memory, executive functioning, and social and emotional development. They’ll also measure the development of their brain circuitry through electroencephalography (EEG). (Infants are too young to be exposed to the long, uncomfortable experience of being inside an MRI machine.)

If the children who receive the modest stipend show healthier brain activity and perform better on cognitive tests than those in the control group, Noble and her colleagues will have the first causal evidence linking dire poverty to neural development. She hopes to launch the $16 million study by early 2018. Her team’s funding proposal could have major implications for “income-enhancement policies,” including the Earned Income Tax Credit, the Child Tax Credit, and Temporary Assistance for Needy Families—all of which put money directly in the pockets of poor families. “Although income may not be the only factor that determines a child’s developmental trajectory,” Noble wrote in a March article for Scientific American, “it may be the easiest one to alter from the standpoint of implementing policy—a down payment of sorts to promote the health of a growing child’s brain.”

“It’s really a shame for this field that [Hillary Clinton is] not our next president.”

At least, that’s what researchers were hoping before the presidential election. As Martha Farah told me, Hillary Clinton has been interested in using neuroscience to better understand child poverty ever since she was first lady. “I would expect her to have been very proactive on this topic, both trying to support the research and also looking for all kinds of ways—neuroscience-related and otherwise—to support the development of kids in poverty,” Farah said. “It’s really a shame for this field that she’s not our next president.”

As for President Donald Trump, “it doesn’t seem like that would be his top priority,” Farah says. (Indeed, his budget proposes drastic cuts to Medicaid and other safety net programs.) Luckily, a lot of the papers being published on how poverty affects developing brains are using data sets from other studies. “Basically,” Farah said, “this work is going forward without much in the way of focused federal funding.” This means that the research can continue to thrive, even under a federal government unconcerned with the potential causal relationship between child poverty and stunted brain growth.

Of course, much of the power to convince politicians and move the needle in policy circles hinges on the outcome of Noble’s upcoming study. We need to know “that if we gave people more money, kids’ brains would look different,” says Russ Whitehurst, a senior fellow at the Brookings Institution’s Center on Children and Families. Besides influencing the debate over tax credits and cash entitlements for poor families, clearing that bar of causation could help transform the way Americans think about the social safety net in a country where more than 1 in 5 kids—15 million total—live below the federal poverty line.