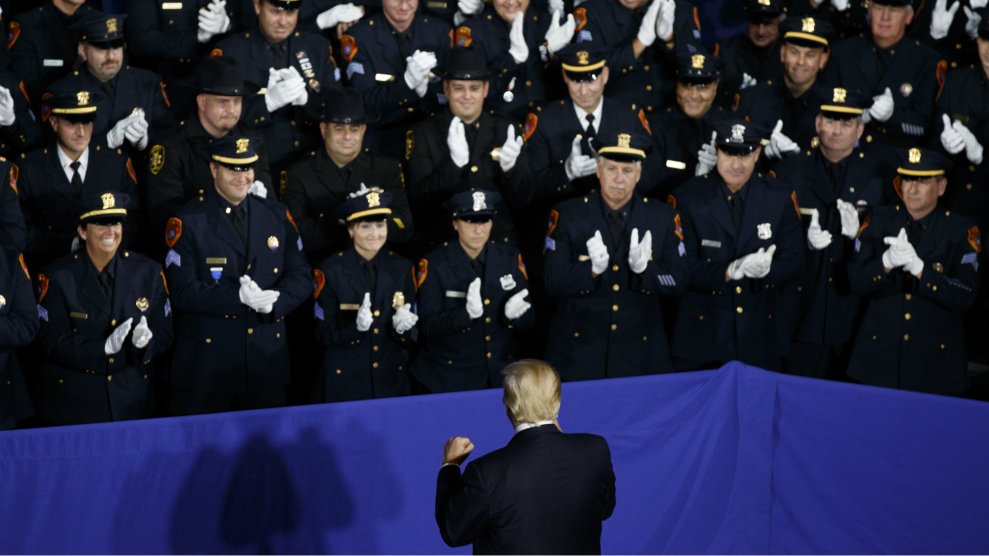 President Donald Trump gave a speech at a Long Island community college on Friday during which he encouraged the use of violence. Turns out the audience was comprised of officers in a police department that has been scrutinized for racial profiling, and whose former chief was recently sentenced to prison for beating a man.

The Suffolk County Police Department (SCPD) has been under federal oversight by the US Department of Justice since 2013, following a two-year investigation into allegations of discrimination against Latinos and immigrants. Nearly 20 percent of the county’s 1.5 million residents are Latino.

During his speech, Trump encouraged officers not to be “too nice” to suspects or take measures to protect them from harm. The speech was supposed to address federal efforts to combat MS-13, the violent street gang with ties to Central America.

After the speech, the SCPD posted on Twitter that it does “not tolerate roughing up of prisoners.”

As a department, we do not and will not tolerate roughing up of prisoners.

The International Association of Chiefs of Police also responded to the incident, saying that officers must make sure that any use of force is “carefully applied and objectively reasonable.”

International Association of Chiefs of Police responds to Trump’s remarks about police use of force: pic.twitter.com/FQ05oO7m90

But officers in the audience responded to Trump’s remarks with applause.

Such a reaction is, at the very least, unsettling given the allegations of discrimination against the department. The DOJ never publicized the findings of its investigation, but a 2011 letter from the DOJ to then-Suffolk County Executive Steve Levy indicates that the police department was investigated for discriminatory policing against Latinos, including an indifference toward immigrant residents that discouraged reporting crimes and cooperation with law enforcement, failing to thoroughly investigate hate crimes, and enforcing immigration policies in a way that encouraged racial profiling. A reform agreement reached between the DOJ and Suffolk County in 2013 required the department to institute a range of reforms. Specifically, the SCPD has been tasked with developing a bias-free policy that prohibits discrimination, “including the denial of services” based on race, and with revising its policy for the arrest of non-US citizens and people with dual citizenship.

The agreement also mandates additional anti-bias training, more outreach to Latinos, the hiring of more bilingual officers, and a bi-annual report to the DOJ about misconduct complaints against officers.

The Justice Department launched its investigation into the SCPD in 2009, after the murder of 37-year-old Ecuadorian immigrant Marcelo Lucero. Lucero was stabbed to death by a member of a gang of teenagers who police officials later said target Latinos. Lawyers for Lucero’s family sued Suffolk County officers, accusing them of failing to investigate the crime thoroughly. As part of the DOJ investigation that followed, Latino residents told officials about hate crimes they reported to local police that were not investigated, and that they felt “immigrant bashing” was permitted by the SCPD, according to the reform agreement.

Neither the 2011 letter nor the 2013 settlement agreement includes allegations of excessive force against SCPD officers, but that doesn’t mean department has gone without such allegations in the past. Last November, for instance, a former chief of the department was sentenced to nearly four years in federal prison for beating a handcuffed man for stealing his duffle bag containing pornography and sex toys. Several other officers were indicted in December for their alleged roles in the beating.