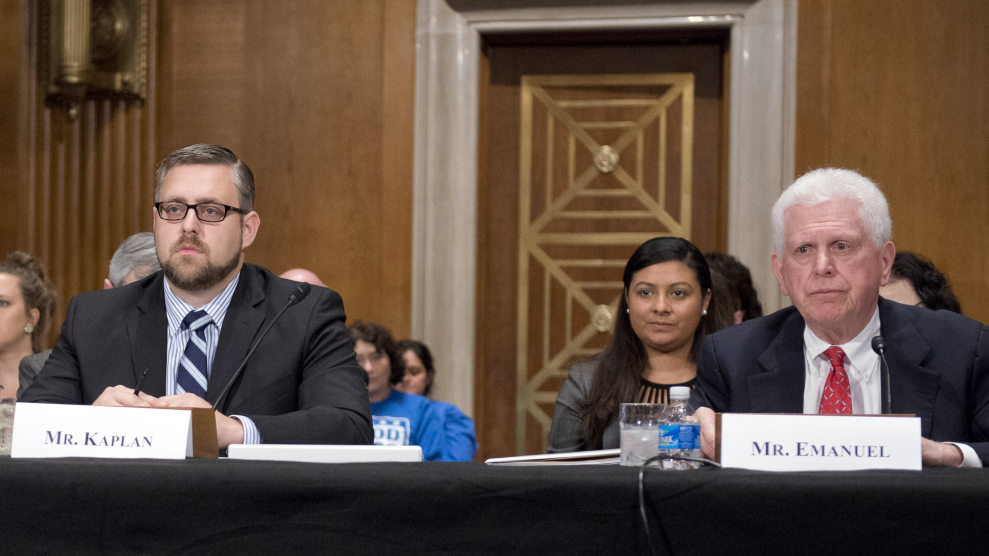 In 2000, Donald Trump wrote in his book The America We Deserve that “with the globalization craze in full heat, unions are about the only force reminding us to remember the American family.” During last year’s presidential campaign, he boasted that he had “tremendous support within unions” and then received a larger share of the union vote than any Republican since Ronald Reagan.

But as president, he hasn’t always repaid the favor. On Wednesday, a Senate committee approved two Trump nominees, Marvin Kaplan and William Emanuel, to the National Labor Relations Board who have long records of fighting unions. If they are confirmed by the full Senate, Republican appointees will control the five-person board and be able to undo rulings that made it easier for workers to form unions.

During the Obama administration, the NLRB, an independent agency tasked with protecting workers’ right to organize, frustrated employers by consistently siding with workers. The board redefined what counts as an employer, making it easier for workers at fast-food restaurants and other franchised businesses to form a union. It opened the door to “micro-unions” by allowing nursing assistants to unionize independently of their coworkers, and it allowed graduate-student employees at private universities to unionize.

Perhaps most important, the board ruled that workers, regardless of union status, cannot be forced to sign arbitration agreements that require disputes to be resolved by individual tribunals instead of class-action lawsuits argued before an open court. Former Fox News host Gretchen Carlson, for example, was prevented from suing Fox for sexual harassment because she signed such an agreement. After she got around it by suing the late Fox CEO Roger Ailes directly, more than 20 women accused Ailes of harassment. Had Carlson used the private arbitration her contract called for, those women would never have learned about Carlson’s allegation.

Other NLRB decisions, like allowing workers to discuss union matters over company email, were more straightforward. But taken together, the rulings helped keep unions relevant in the modern workplace. Since the mid-1950s, the share of private-sector workers who belong to a union has dropped from about one out in three to one in fifteen.

Trump’s NLRB nominees are expected to create further challenges for workers seeking to unionize. Emanuel is a shareholder and longtime lawyer at Littler, the world’s largest management-side employment law firm. Sen. Elizabeth Warren (D-Mass.) has called it is one of the nation’s “most ruthless” union-busters. Emanuel’s clients include Uber and other companies accused of violating workers’ rights, according to his ethics disclosure form.

Outside of his legal practice, Emanuel has decried California’s “terrible climate for job creation,” citing the state’s generous overtime and break requirements for employees.

Kaplan was previously an attorney for the House education and labor committee. In that role, he drafted a bill to reverse an NLRB rule, dubbed the “ambush election rule” by conservative critics, that allowed workers to vote on unionization as soon as 11 days after a petition was submitted. The bill, which did not pass, would have also reversed the board’s recognition of micro-unions.

At Emanuel and Kaplan’s nomination hearing last week, Sens. Al Franken (D-Minn.) and Warren were particularly concerned by Emanuel’s record of defending the mandatory arbitration agreements that Carlson and many others have signed. Pressed by Franken, Emanuel declined to criticize arbitration agreements that prevent women who are sexually harassed from suing their employers in court.

In theory, the legality of the arbitration agreements is now in the Supreme Court’s hands. But Ronald Meisburg, a former NLRB board member, has said it’s possible the NLRB could revisit the decision before the court decides. Emanuel told Warren he does not expect to recuse himself if the issue comes up.

The committee’s approval of both nominees along party lines on Wednesday follows other moves under Trump that are less than friendly to labor. Trump’s nominee for deputy labor secretary, Patrick Pizzella, was criticized last week for working with disgraced lobbyist Jack Abramoff to advocate for what was compared to sweatshop labor in the Northern Mariana Islands, a US commonwealth, in the early 2000s. The goods, which were often made by Chinese and Filipino workers, had the advantage of being stamped “Made in the USA.”

Neil Gorsuch, whom Trump appointed to the Supreme Court, has a long record of siding with employers in labor disputes. In the court’s upcoming term, Gorsuch will hear arguments in a case that will decide whether mandatory arbitration agreements violate the National Labor Relations Act.