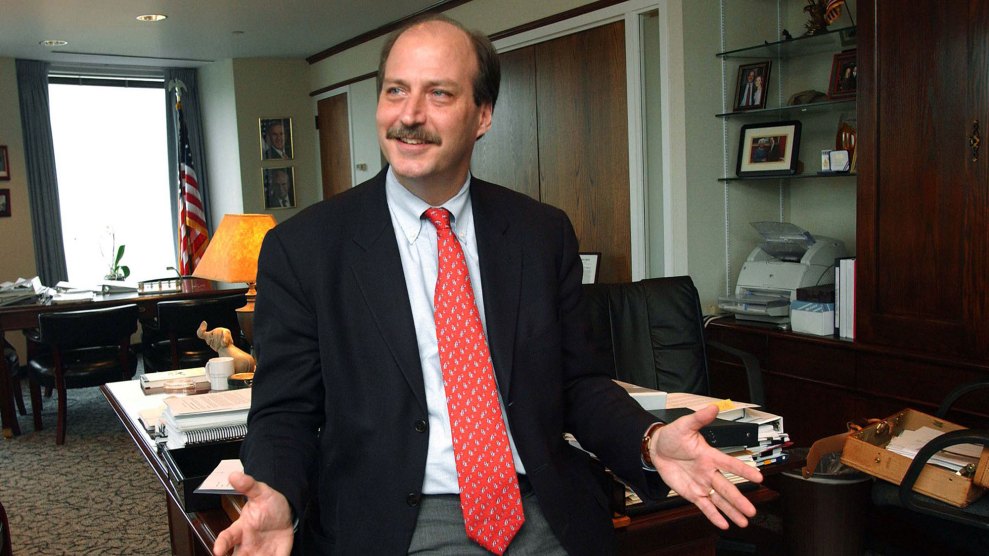 The Trump administration has hired a controversial social-conservative activist who once defended a Baptist proclamation that a wife should “submit herself graciously” to her husband’s leadership.

Wade Horn, who was known as the “marriage czar” for his work in the George W. Bush administration promoting marriage as an anti-poverty measure, is now working at the US Department of Health and Human Services (HHS)—though the department will not say what he’s doing there.

When Bush tapped Horn in 2001 to serve as an assistant secretary at HHS, women’s groups protested, citing Horn’s defense of a 1998 proclamation on marriage by the Southern Baptist Convention, the country’s largest Protestant denomination, asserting that a woman should “submit herself graciously” to her husband’s “servant leadership.” In a regular column he wrote for the Washington Times called “Fatherly Advice,” Horn, a child psychologist, wrote approvingly of the proclamation, quoting from the New Testament that “the husband is the head of the wife just as Christ is the head of the Church.”

Horn, the first president of the National Fatherhood Initiative, was a fierce culture warrior. He battled what he called the “we-hate-marriage left,” railed against divorce and cohabitation, blamed single motherhood for many of the country’s social ills, and suggested that unwed parents should be denied access to federal anti-poverty programs, such as public housing and early childhood education, until all eligible married couples had been served. He traveled the country urging state officials to spend taxpayer dollars promoting marriage as a way of reducing the welfare rolls.

Bush tapped him to do just that at HHS, where he worked to refocus federal poverty programs to encourage poor single mothers to marry their way out of poverty—and off the dole. After leaving the administration in 2007, he went to work for Deloitte Consulting’s Health and Human Services practice, which has won contracts with his former agency.

Horn has flown surprisingly under the radar at HHS given his controversial history, perhaps because he hasn’t been officially nominated for a job or subjected to a confirmation hearing. Even Democrats on Capitol Hill who oversee the agency were not aware that he had returned. Horn has an official HHS email address, and he is listed in the HHS personnel directory as assigned to the immediate office of Secretary Tom Price. People who know him say he’s working for Price full time. Yet late last month, Horn appeared on a panel at a welfare conference whose program identified him as a “transition official” for Price and a Deloitte employee. What exactly he’s doing at HHS is a mystery. Horn did not respond to multiple calls and emails seeking comment.

When I asked HHS for more information about Horn’s role at the agency, including his hiring date and job description, spokesman Matt Lloyd responded by email, “Why are you asking?” He later called me to ask about the “impetus” for my story and demanded more information about it. He refused to answer any of my questions on the phone.

Horn’s previous tenure at HHS suggests a few reasons the administration might not be keen on publicizing his return. When Bush nominated Horn for the HHS post in 2001, he was charged with promoting marriage as a federal anti-poverty program, long a priority for evangelical Christians. Bush ended up taking $100 million a year out of the Temporary Assistance for Needy Families program and other anti-poverty programs and funneling it into dubious marriage-promotion ventures. Under Horn, HHS doled out grants to organizations that offered relationship counseling, couples massage, date nights, and seminars with titles like “Laugh Your Way to a Better Marriage.” Evaluations showed the experiment to be a flop; few participants got married.

Bush also put Horn in charge of abstinence-only sex education grants, many of which went to conservative Christian organizations. Horn earned public derision when he focused some of the abstinence programs on 20-somethings, prompting Mother Jones’ Dave Gilson to dub his effort the “Don’t Sleep With Anyone Before 30 campaign.” Like the marriage programs, the abstinence effort was a bust. A rigorous, congressionally mandated HHS evaluation found that even the best abstinence-only programs had no impact on teen sex rates or pregnancy.

Under Horn, HHS doled out grants to organizations that offered relationship counseling, couples massage, date nights, and seminars with titles like “Laugh Your Way to a Better Marriage.”

Horn was at the center of a minor scandal over the Bush administration’s secret hiring of journalists to promote its marriage initiative in newspapers. He approved an HHS contract of more than $20,000 for Maggie Gallagher, a founder of the anti-gay marriage group National Organization for Marriage who had a syndicated newspaper column, to promote the administration’s Healthy Marriage Initiative. Gallagher wrote favorable columns about the administration’s marriage policies without disclosing the contract, raising the specter of state-sponsored propaganda. Horn’s fatherhood outfit had also funded some of Gallagher’s work using grant money from the Justice Department, and she later ghostwrote an essay published under Horn’s name while he was in the administration.

HHS paid another syndicated columnist, Michael McManus, to promote the administration’s policies and gave grant money to his organization, Marriage Savers, on whose board Horn had previously sat. McManus quoted Horn in several of his stories without disclosing that he was getting paid by HHS.

In 2007, Horn resigned from the agency not long after news broke that one of the fatherhood initiatives he had started at HHS had given his former employer, the National Fatherhood Initiative, up to $5 million in contracts. After leaving HHS, Horn joined Deloitte and spent the Obama years as a regular on the DC think-tank circuit.

The election of Donald Trump brought new opportunities. Horn served on Trump’s HHS transition team, and once Trump took office, he came on board—but not as a government employee. Instead, Horn is still employed by Deloitte but working for Price as a contractor, apparently on a full-time basis. What he does at HHS isn’t clear. An HHS spokesman eventually emailed me to confirm that Horn is a contractor but wouldn’t elaborate on his official duties. “Contractors do not have titles or job descriptions,” he said. HHS officials did not respond to further inquiries as to what sort of contract Horn is working on.

Horn does have a job description at Deloitte. His biography on the company website says he’s responsible for “leading the Health and Human Services (HHS) Marketplace and is a key adviser to HHS clients.” In effect, his job is advising a federal agency that also has the authority to grant contracts to his firm. In July, for instance, HHS granted Deloitte a two-month, $1 million contract to “reimagine” HHS. According to people who work there, members of the firm have been a constant presence at the agency, running “innovation” workshops since at least May. Deloitte’s lobbying arm has spent more than a million dollars this year lobbying the federal government, including at HHS. A Deloitte spokeswoman did not respond to requests for comment.

The coziness between Deloitte and HHS strikes some good-government watchdogs as problematic. “Relying on outside corporate consulting firms to ‘reimagine’ the government is basically inviting the corporate class inside the government to better serve their interests,” says Robert Weissman, president of the advocacy group Public Citizen. “The conflicts are out of control.”

For corporate consulting firms like Deloitte, there’s not much money to be made in obsessing over sex or welfare moms at HHS. The big money lies in HHS’s core portfolio: health care. And in fact, for the past several years, Horn has been working with Deloitte to help states implement Obamacare, setting up health insurance exchanges in Kentucky and other states that opted to run their own exchanges rather than rely on the federal portal.

Emails obtained by the liberal watchdog group American Oversight through the Freedom of Information Act list Horn as a regular attendee at meetings with Price and other officials on repealing Obamacare. He’s also copied on emails to Price preparing him for congressional testimony on HHS funding. With his work for Price, it’s possible that Horn and his firm are now making money helping the Trump administration dismantle the very system Deloitte profited from setting up.