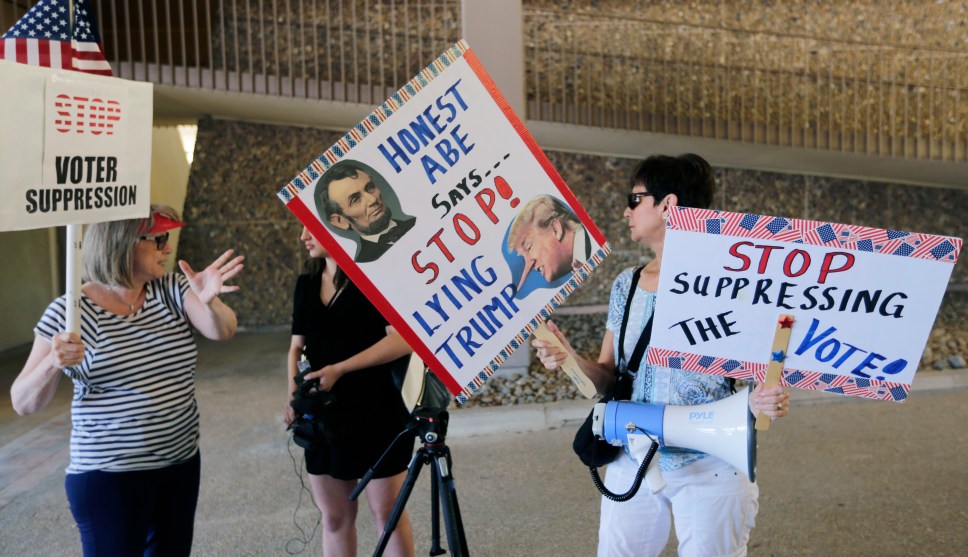 Protesters gather outside a federal courthouse in San Antonio in July. Eric Gay/AP

On August 17, the Fifth District Court of Appeals ruled that Texas’ restrictions on assistance to non-English-speaking voters violated the Voting Rights Act.

On August 23, a federal district court in Corpus Christi ruled that Texas’ voter ID law, amended by the state legislature in 2017, had a “discriminatory purpose” against minority voters.

This repeated finding of intentional discrimination means that federal courts could once again require Texas to clear any changes to voting laws or procedures with the federal government. Under the 1965 Voting Rights Act, Texas and other Southern states with a history of discriminatory laws couldn’t make these changes without federal approval, until the Supreme Court struck down that part of the Voting Rights Act in 2013. The court’s ruling, however, left open the possibility that states could be made subject to that requirement again if they are found to intentionally discriminate against minorities. (The state’s voter ID law and redistricting maps were blocked under the VRA before that ruling.)

Wednesday’s ruling is particularly significant because, unlike earlier court rulings, it doesn’t soften the voter ID law but strikes it down entirely. The law required certain forms of government-issued ID to vote, allowing voters to cast a ballot with a handgun permit but not a student ID. The same federal court that ruled against the law on Wednesday had twice ruled against a similar Texas voter ID law. In response, Texas passed an amended law, SB 5, in July that allowed Texans without photo ID to vote if they presented alternative forms of non-photo ID or signed a “reasonable impediment” affidavit attesting to why they couldn’t obtain ID.

But the new voter ID law still discriminated against minority voters, Judge Nelva Gonzales Ramos announced on Wednesday. The ruling was a setback for the Trump Justice Department, which defended the law. “SB 5 perpetuates the selection of types of ID most likely to be possessed by Anglo voters and, disproportionately, not possessed by Hispanics and African-Americans,” Ramos wrote. “SB 5 does not meaningfully expand the types of photo IDs that can qualify, even though the Court was clearly critical of Texas having the most restrictive list in the country.” Texas still excludes state government IDs and student IDs, for example, which have been accepted in other states with voter ID laws.

Ramos also took issue with a part of the law specifying that voters could face felony perjury charges if they have an acceptable ID but falsely sign a “reasonable impediment” affidavit. She said the provision could have a “chilling effect” on voter participation. Texas “trades one obstacle to voting with another—replacing the lack of qualified photo ID with an overreaching affidavit threatening severe penalties for perjury,” she wrote. (A noncitizen who voted in Texas in 2012 and 2014 because she thought she was eligible with a green card was sentenced to eight years in prison earlier this year, an unusually harsh penalty for a case of apparently inadvertent illegal voting.)

Ramos also criticized the state for allocating no money to educate voters about the revised law. Although a federal court found that 600,000 registered voters in Texas lacked an acceptable voter ID, the state had issued only 869 free IDs from June 2013 to April 2017, according to ProPublica.

Texas has already appealed the redistricting ruling and vowed to appeal the voter ID one. A Supreme Court ruling on either case could have far-reaching ramifications for voting rights in the United States.

When he invalidated part of the Voting Rights Act in 2013, Supreme Court Chief Justice John Roberts wrote that “things have changed dramatically” in the South. Recent court decisions in Texas tell a different story.