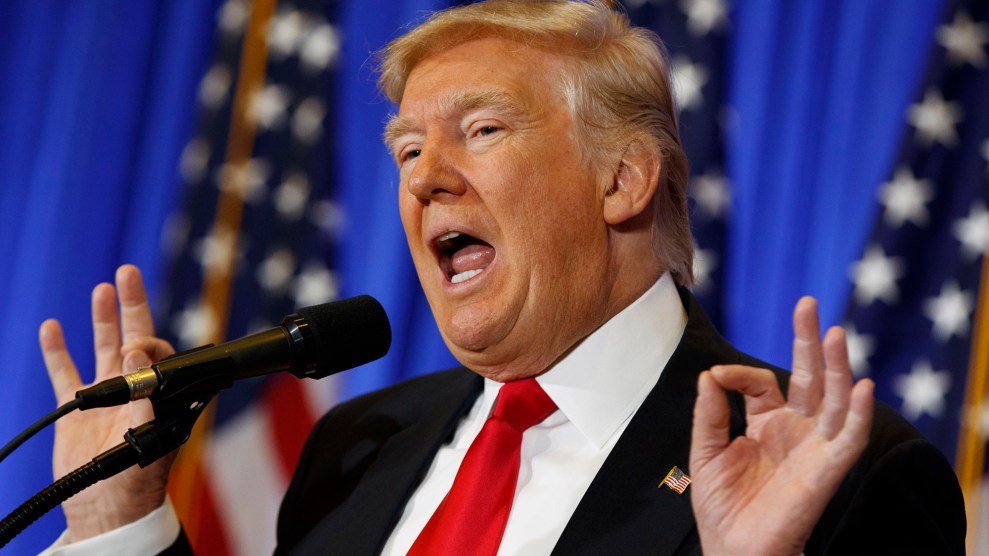 Since the eruption of the Russia scandal, President Donald Trump and his allies have consistently lied and deceived regarding assorted aspects of the controversy. Recent news stories revealing that Trump pursued a tower project in Moscow while running for president—despite his repeated insistence that he has no business dealing in Russia—are a reminder of how brazen these untruths have been. Overall, Trump has amassed a serious record of prevarication. But he and his gang have outdone themselves when lying about the Russia investigation. So much so that one can well wonder, with full suspicion, why Trump and his crew have resorted to such huge lies.

Here’s a brief review of the top three falsehoods they have attempted to sell.

Trump has declared over and over that there was no collusion between his campaign and Vladimir Putin’s regime, which, according to the US intelligence community, mounted a covert operation to subvert the 2016 election to help Trump become president. On May 8, Trump tweeted, “The Russia-Trump collusion story is a total hoax, when will this taxpayer funded charade end?” He maintained he was the victim of Democratic conspiracy-mongering: “Again, the story that there was collusion between the Russians & Trump campaign was fabricated by Dems as an excuse for losing the election.” At a May news conference, he proclaimed, “The entire thing has been a witch hunt. And there is no collusion between certainly myself and my campaign, but I can always speak for myself—and the Russians, zero.” The next month, he tweeted, “After 7 months of investigations & committee hearings about my ‘collusion with the Russians,’ nobody has been able to show any proof. Sad!” He claimed that any talk of collusion was unfair to him: “There is no collusion & no obstruction. I should be given apology!”

There is no question collusion occurred. The only question is if there was any other collaboration.

Yet there was collusion. The proof is Donald Trump Jr.’s emails. In July, Trump Jr., racing to beat a New York Times story that was about to appear, posted emails showing that he and his father’s campaign had tried to plot with a top Kremlin official to acquire dirt on Hillary Clinton. The emails revealed that Aras Agalarov, a Russian oligarch developer and Trump business partner, informed Trump Jr. (via his son Emin Agalarov, a pop singer, and Emin’s manager, Rob Goldstone) that the prosecutor general of Russia, a Putin ally, wished to provide the Trump campaign with information that would incriminate Clinton. The emails noted this effort would be part of the Putin regime’s hush-hush “support for Mr. Trump.”

Trump Jr. quickly and eagerly arranged a meeting with a Russian emissary supposedly bearing the Clinton information, and on June 9, 2016, Trump Jr.; Jared Kushner, Trump’s son in law; and Paul Manafort, the Trump’s campaign top official, met with several Russians to receive the anti-Clinton information. After this meeting was exposed a month and a half ago, the Trump camp maintained that nothing had come out of the meeting between the Trump advisers and the Russians. No dirt was snagged. But there can be no denying (in a reality-based world) that the Trumpers were colluding with Russians. They just—in their account—didn’t get what they wanted. But given that the Trump camp initially lied about the nature of the meeting and its attendees, only a sucker would accept their account at face value. Whatever the outcome of the get-together, this is a solid instance of conspiring between Trump’s top lieutenants and prominent Russians. There is no question collusion occurred. The only question is if there was any other collaboration.

Nothing to see here

From the moment the news broke that the Democratic National Committee had been penetrated by hackers associated with Russian intelligence—a story that hit the headlines a mere five days after Trump Jr., Kushner, and Manafort met with the Russians—Trump and his aides immediately challenged the notion that Moscow was behind this break-in. The Trump campaign’s first response to the DNC breach was to blame the victim. It released an absurd statement: “We believe it was the DNC that did the ‘hacking’ as a way to distract from the many issues facing their deeply flawed candidate and failed party leader.” And in the weeks and months ahead, Trump and his mouthpieces regularly maintained there was no evidence the Russians were hacking the election. But Trump’s most senior advisers had been informed (see above) that Putin’s regime was aiming to intervene secretly to hurt Clinton and benefit Trump. More than anyone, they knew their claim that Russia was not involved in political skullduggery was hollow.

More than anyone, Trump’s advisers knew their claim that Russia was not involved in political skullduggery was hollow.

In August 2016, Trump, as the GOP nominee, received an intelligence briefing and was reportedly told that the US intelligence community by then had concluded Moscow was behind the DNC hack and the subsequent dissemination of information stolen from the Democrats. Still, Trump kept denying Russian involvement. At the first presidential debate, he quipped that the DNC hacker “could be somebody sitting on their bed that weighs 400 pounds, okay?”

He has essentially continued this line ever since. The few times he has acknowledged Russia was the perp, he has quickly added that it could also have been another bad actor. So though his own campaign had direct, firsthand evidence that Putin’s government intended to muck about in the campaign to boost Trump’s chances, Trump has cast doubt on whether anything of the sort happened. This lie was rather consequential, for it made it tougher for Republicans to join President Barack Obama and other Democrats in fashioning a nonpartisan response to Putin’s clandestine operation. With Trump insisting there was no Russian connection, it was difficult for any GOP leader, in the heat of a presidential campaign, to say otherwise. Trump’s deployment of this false assertion muddied the public narrative and provided cover for Russian intelligence’s assault on American democracy.

No business with Russia

Trump has repeatedly proclaimed he has no commercial interactions with Russia. One example: Nine days before moving into the White House, he tweeted, “I HAVE NOTHING TO DO WITH RUSSIA – NO DEALS, NO LOANS, NO NOTHING!”

Russia has never tried to use leverage over me. I HAVE NOTHING TO DO WITH RUSSIA – NO DEALS, NO LOANS, NO NOTHING!

At the time of the tweet, there was already ample evidence in the public record that Trump had endeavored for three decades to strike major business deals in Russia. He had made a bundle of money marketing and selling properties to Russians. He had pocketed at least $12 million in income from the Miss Universe contest he held in Moscow in 2013. And after that event, he and Aras Agalarov signed a letter of intent to build a Trump Tower in the Russian capital—a project that fizzled out.

This week, the Washington Post reported that Trump signed a letter of intent on October 28, 2015—the same day he participated in a GOP primary debate—with a Russian firm to develop a Trump Tower in Moscow. While he was campaigning for president, he was, in a way, moonlighting in Moscow. Michael Cohen, Trump’s longtime private lawyer and adviser, even sent an email to Putin’s office looking for assistance with the project. (In a statement provided to the House Intelligence Committee, Cohen said he never heard back from the Kremlin.) Like the earlier deal with Agalarov, this project stalled and was over by the end of January, according to Cohen. But here was Trump trying to cook up a huge project in Moscow as he was seeking the White House. This certainly supplies one explanation for the many Putin-friendly statements Trump made on the campaign trail and his refusal to criticize Putin. A developer hoping to strike it big in Russia could not afford to tick off the Russian strongman.

When President Bill Clinton was under investigation for having lied about his relationship with White House intern Monica Lewinsky, he was asked about a statement he had made under oath insisting “there’s nothing going on between us.” To explain this remark, he said, “It depends upon what the meaning of the word ‘is’ is”—suggesting that his comment had been true because he was not having sex with Lewinsky at the time he was queried about it. And for that, Clinton has been soundly derided for almost two decades. Trump’s oft-stated claim that he has no business involvement with Russia is not as juicy a lie as the famous Clinton whopper. But it falls into the same category. Trump knew he had tried to pull off a major business deal—one that could not happen without support from Putin and the Kremlin—yet he made it sound as if he was a virgin when it came to financial relations with Russia.

There have been other instances of Trump swilling falsehoods related to the Russia scandal. He has issued contradictory statements about whether he has ever met or communicated directly with Putin. He also claimed that he fired FBI Director James Comey because of how he had handled the Hillary Clinton email server investigation. (Then Trump conceded the Russia investigation was part of the reason for his abrupt dismissal of Comey—which special counsel Robert Mueller might be investigating as possible obstruction of justice.) But his biggest lies are foundational: There was indeed active collusion between the senior ranks of Trump’s campaign and Russia; Trump and his campaign aides falsely insisted Russia was not intervening in the campaign when they had reason to know otherwise; and Trump had business connections to Russia from the 1980s through the first half of his presidential campaign.

Any one of these lies ought to be a major scandal in and of itself. Each one is a hoax. None should get lost in the quick shuffle of news cycles and the cascade of fresh outrages. They provide cause to disbelieve and distrust any utterance Trump or a surrogate makes about the Russia investigation—an investigation that at its core is about the credibility of the commander in chief and the legitimacy of his presidency.