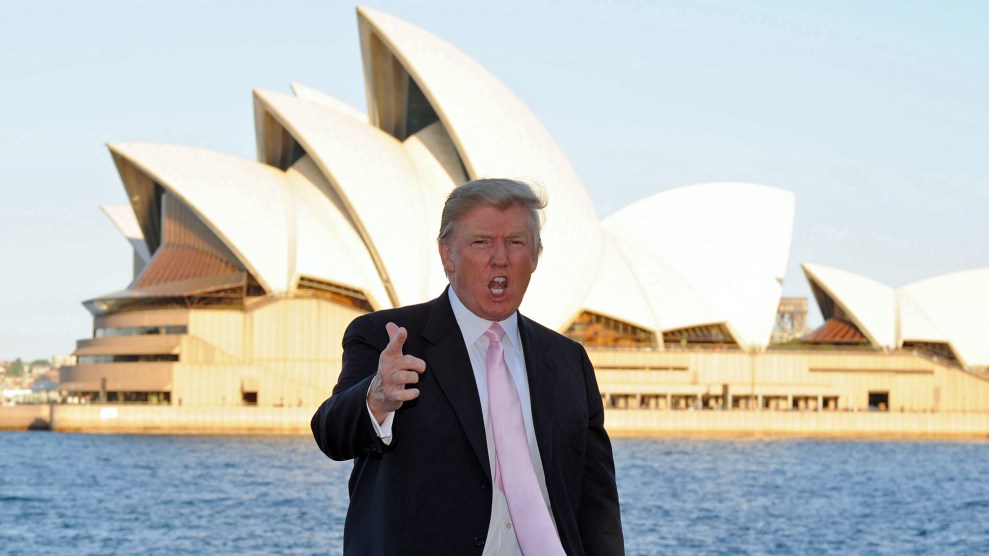 Australian authorities simply couldn’t stomach Donald Trump’s alleged mob ties, according to government documents published by Rupert Murdoch’s newspaper, The Australian, on Tuesday. The paper’s investigation reveals that Trump’s dream of building a casino in Sydney in the late 1980s was killed off by queasy officials who considered his operations in New Jersey “dangerous.”

In 1987, Trump had already opened two casinos in Atlantic City, New Jersey—Trump’s Castle and Trump Plaza—with Trump Taj Mahal on its way. He was looking to expand the empire Down Under by bidding for a spot on Sydney’s picturesque harbor in partnership with a local developer, the Kern Corporation.

When the state government officials met that May to consider proposals for the site, they were presented with a police report that was unambivalent in opposing the plan for a one clear reason. “Atlantic City would be a dubious model for Sydney and in our judgment,” police noted, according to a summary contained in government minutes. “The Trump Mafia connections should exclude the Kern/Trump consortium.”

Also included in the documents published by The Australian is a fin­ancial report concluding Trump’s partnership had overstated estimated revenue from the ­casino.

Trump’s comments about the Sydney casino at the time foreshadow his bellicosity as president. From The Australian:

Mr Trump boasted about his bid for the casino before cabinet reached its decision. “If our design is chosen, it will not only be the largest, but one of the most magnificent, one of the most beautiful hotels anywhere in the world,” he told The Australian in February 1987. A month before the cabinet decision, he pulled out of the cas­ino race but three days later announced he was still a contender.

It turns out Sydney dodged a bullet. Just a year later, Trump was trying to convince New Jersey officials he had the financial wherewithal to open Trump Taj Mahal, according to January 2016 Mother Jones reporting on his Atlantic City bankruptcies:

At a hearing in 1988, Trump assured regulators that his reputation would secure him the necessary financing. In particular, he said he could get loans at prime rates—the interest rate that commercial banks offer their most trusted customers—rather than so-called “junk bonds.”

“I can use my own funds or I can use regular bank borrowings, so I can build at the prime rate,” Trump said, according to transcripts obtained by the Post. “I mean, the banks call me all the time. ‘Can we loan you money? Can we do this? Can we do that?’”

Trump continued with a line that could be straight out of one of his campaign speeches: “I get it done, and everybody is happy, and it turns out successfully.”

But he did not get it done, and everybody was not happy. While the regulators approved Trump’s casino license, the promised prime-rate loans never materialized, and Trump turned to the very junk bonds he had disparaged. “He agreed to pay the bond lenders 14 percent interest, roughly 50 percent more than he projected, to raise $675 million. It was the biggest gamble of his career,” Post reporter Robert O’Harrow Jr. wrote.

It was a gamble that failed: The Taj Mahal project ultimately filed for bankruptcy, screwing workers out of millions in retirement savings in the process.

The new reporting adds a new detail to exhaustive reporting by my colleague David Corn before the 2016 election, in which he details Trump’s known connections to mob associates and organized crime:

For years during his business career, Trump worked or associated with proven or alleged mobsters. (Trump’s longtime lawyer, the thuggish and deceased Roy Cohn, repped numerous Mafia bosses, some of whom were connected to Trump projects.) Yet when asked about his links to the mob, Trump has repeatedly made false comments and has contradicted himself—to such a degree it seems he has flat-out lied about these relationships, even when he was under oath.

In a follow-up article, The Australian reports that Trump began airing doubts about the Sydney casino deal around the time the damning police report was finalized, abruptly canceling a trip to Australia. “I don’t know whether my enthusiasm level can be very great for that particular job,” he said at the time, bemoaning the long flight from America. “It’s just a long, long trip away. I believe [in] very hands-on management.’’