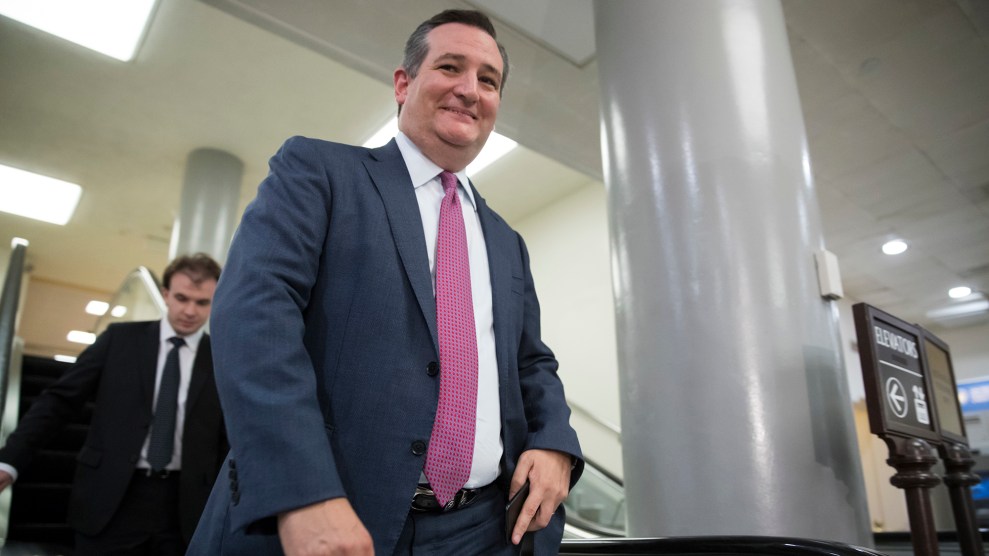 Before Hurricane Harvey hit this weekend, Texas senators Ted Cruz and John Cornyn sent a letter to the president urging him to sign the major disaster declaration that had been requested by Gov. Greg Abbott, so the state could access key federal resources as swiftly as possible.

“Given the potential catastrophic impact that the Hurricane may have on Texas communities,” the senators wrote, “we strongly support this request and urge you to provide any and all emergency protective measures available by a major disaster declaration.”

The irony of this request was not lost on lawmakers from states that had been devastated by hurricane Sandy in 2012. At that time, Texas lawmakers overwhelmingly voted against recovery assistance for New York and New Jersey. When asked about that hypocrisy today on MSNBC, Cruz dodged the question. “There’s time for political sniping later,” he said. “I think our focus needs to be on this crisis and this disaster.”

Rep. John Culberson, whose district includes parts of Houston, was the only Texas Republican in Congress to support the $50.7 billion relief effort after the 2012 storm. The total damage was estimated to be $65 billion to assist in recovery for states from NorthCarolina to New England—with New Jersey and New York suffering the greatest devastation. (Culberson’s district has been hit hard by Harvey, and according to an investigation last year by ProPublica and The Texas Tribune, it has been especially vulnerable to hurricanes.) Both Cruz and Cornyn had opposed the Sandy aid, citing concerns about additional spending—which consisted of funding for disaster preparedness and relief in other parts of the country as a way to garner more support for the relief effort.

“Hurricane Sandy inflicted devastating damage on the East Coast, and Congress appropriately responded with hurricane relief,” Cruz said in a statement at the time. “Unfortunately, cynical politicians in Washington could not resist loading up this relief bill with billions in new spending utterly unrelated to Sandy.”

Despite the lack of support from their Texas colleagues five years ago, several lawmakers from New Jersey and New York are stepping forward to say they’ll support additional appropriations for The Lone Star State’s recovery, which was estimated to be $40 billion by CoreLogic, a company that conducts property and financial analysis. But they made this estimate when the storm was still expected to be a category 3 event. The storm was upgraded to Category 4 when it made landfall Friday night.

“Despite my Texas colleagues’ refusal to support aid in South Jersey’s time of need, I will support emergency disaster $$ for those impacted,” Rep. Frank LoBiondo (R-NJ) wrote in a tweet.

Rep. Pete King (R-NY) promised not to abandon Texas and made a reference to Cruz’s attack on “New York values” on the campaign trail.

As lifelong NYer w/ NY values I will vote for emergency Harvey $ for Ted Cruz’s constituents. Above all, true Americans must stand together.

Cruz would be smart to ask for the kind of aid he opposed after Superstorm Sandy—it would give Texas additional money to get ready for such devastating storms, which appear to be getting more frequent.

texans should hope cruz helps do what he criticized the sandy aid package for doing: get $ for future texas storm prep. he won’t, of course.