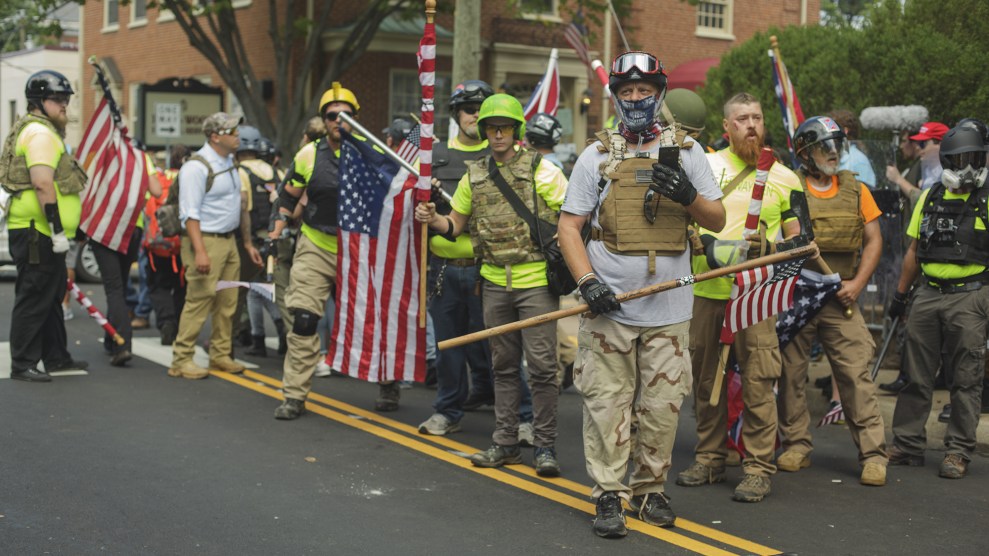 Early this Saturday, a day most of the country spent watching the violence spilling over from white supremacist rallies in Charlottesville, a 23-year-old claiming to be a member of the Three Percenters militia named Jerry Drake Varnell was arrested as he tried to set off a truck bomb outside a bank in Oklahoma City. The bomb was supposed to be constructed of anhydrous ammonia, a chemical homage to Timothy McVeigh and the weapon he used to kill 168 people inside the Oklahoma City Federal Building in 1995. Varnell had prepared a bunker to be used after his bomb kicked off a war with federal agents. “I’m out for blood,” he allegedly told an FBI informant. “When militias start forming, I’m going after government officials.”

Varnell drove a few miles off and tried to trigger the bomb—which FBI agents had already rendered inoperable—by placing a call on his burner phone. But before he did, he composed a message, to be sent out on social media after the explosion. He explained that the bombing “was not an attack on America, it was a retaliation.” It was, he wrote, “an act done to show the government what the people thinks of its actions. It is also a call to arms, to show people that there are still fighters among the American people. The time for revolution is now.”

It was, he wrote, “an act done to show the government what the people thinks of its actions. It is also a call to arms, to show people that there are still fighters among the American people. The time for revolution is now.”

There’s no evidence that Varnell was trying to time the bomb to coincide with what was happening in Virginia, but the two events still shared a deep link. His original intended target was the five-story building housing the Oklahoma branch of the Federal Reserve. Varnell backed off that target, fearing mass casualties, but according to the FBI’s complaint he was still ready to kill someone. “You gotta break a couple of eggs to make an omelet,” he allegedly told an informant. “That’s why people don’t do this shit, because, you know, you gotta be able to overcome that little reality there.” He wanted to start a war with federal authorities, to “somehow cripple the government,” he allegedly said. “Something that says, ‘you are a target.’”

Varnell described himself as holding “III% ideology,” and wanting to kick off an anti-government revolution. This would make him one of a vast and growing number of Americans who hold an often religious-seeming attachment to the Patriot movement, or “Constitutionalism,” as adherents tend to describe their belief set. Three percenters, as they call themselves, are ideological descendants of radical and conspiracy-minded right-wing groups dating back to the John Birch society of the 1960s, and running up through the militia movements that grew up in the 1990s—but today the groupings are much larger and bolder.

The movement takes its name from an oft-told myth that only three percent of the male population of the American colonies was willing to fight in the Patriot armies during the Revolutionary War, and the idea is of a loose grouping of self-proclaimed Patriots and defenders of the Constitution, ready to do “whatever it takes” to defend the country against what they see as creeping federal tyranny, and to resist in the case of a foreign invasion or a declaration of martial law. The Oath Keepers, which is the largest and best known, once claimed to have 30,000 members (the man who claims to have coined the phrase “three percenter” is also a member of the Oath Keepers) and emerged into national prominence after a string of standoffs in the West, when members either led or helped to lead armed paramilitary protests that succeeded in forcing federal agents to back off enforcement actions in Nevada, Oregon, and Montana.

After the 2014 standoff at the Bundy Ranch in Nevada, which became a major step on the path to national prominence for Three Percenter-affiliated groups, the Oath Keepers’ founder Stewart Rhodes articulated a vision of spiraling confrontation between paramilitaries, the government, and liberals, with an eye toward an all-out clash. The government “knew they had overstepped,” Rhodes said, and that “the ‘optics’ were bad, and they had severely underestimated the resolve and resistance, and could not win without using overwhelming military force. And they knew that if they tried to use that military force—as many leftists were screaming for them to do—the military would split at least in half, and many or most of the current serving trigger pullers in the Marine Corps and Army infantry would have sided with the resistance—joining all of us pissed off veterans in the resulting civil war.”

These groups, and the Three Percenter ideology, grew in part as a response to the presidency of Barack Obama, but if anything they’ve grown stronger and more active after the election of Donald Trump. Oath Keepers and unaffiliated Three Percenters have appointed themselves something like the armed wing of the Trump revolution, blasting out missives against the Deep State and the New World Order on their Facebook page, which has 550,000 followers—more than a third as many as the national Democratic Party’s own page.

And even before the Trump administration came into power, they instituted an alliance with the alt-right, which has applied the paramilitary model of escalating provocation and violence to street rallies across the country, leading up to the events at Charlottesville. Stewart Rhodes was a prominent invitee to the Deploraball—the inauguration-night gala that was otherwise mostly attended by prominent young alt-right Trump supporters—and Three Percenters and Oath Keepers have become a fixture of alt-right rallies, where they serve as paramilitary “protection” against attacks from counter-demonstrators. Three Percenter groups and Oath Keepers have always claimed to disavow white supremacy—but militiamen wearing full tactical gear, carrying semiautomatic rifles, and wearing prominent “III%” patches were everywhere in Charlottesville, blending the ideologies of anti-federal Constitutionalists with the hardest core of the white supremacist alt-right. The militias came openly ready for battle, with helmets and body armor. “They had better equipment than our State Police had,” Virginia’s governor complained later. One popular patch showed a “III%” logo blending into the stars and bars of the Confederate Battle flag.

It wasn’t the group’s first, or worst, show of force. Late last year, three Kansas men with ties to the Three Percenter Security Force of Kansas were arrested after assembling a cache of weapons and allegedly planning to begin a campaign of mass killing of Muslims. “The only fucking way this country’s ever going to get turned around is it will be a bloodbath,” one is alleged to have said, “and it will be a nasty, messy motherfucker.”

The desire to provoke a spiral of violence echoes uncannily what Richard Spencer, one of the organizers of the Charlottesville rally, said when he gloatingly described alt-right-instigated street fights as representing a “new world of politicized violence. A world in which two vanguards, representing the two sides of the political spectrum” have come to a point where discussion is impossible, and now “see themselves as existential foes.”

This was the goal of the marchers and the murderer in Charlottesville, and it’s the goal of a much larger and harder-to-track national movement of violently angry extremists like Jerry Drake Varnell, who cross-pollinate with white supremacist groups and are working feverishly to set off a violent national cataclysm. The events in Charlottesville will only embolden them.