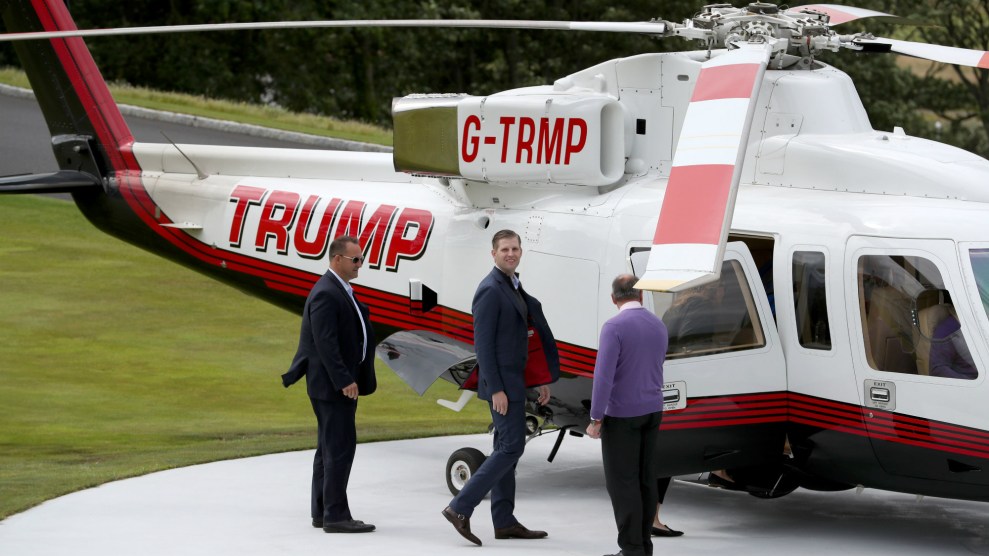 In early June, Tiffany Trump decided to take a trip to Germany with her boyfriend, Ross Mechanic. They posed for Instagram pics, and paparazzi trailed them through Berlin. And so did Secret Service agents. When Eric Trump took 30 or so “businessmen” on a junket to Trump-owned golf courses in the British Isles, he also brought along a Secret Service detail. It’s not clear who Eric’s travel companions were, but he used the trip to promote his father’s golf courses to local media.

The total cost to taxpayers of these Trump family voyages is not yet known, but the pieces of data that have emerged are eye-opening.

USASpending.gov, which catalogues all federal government spending, details two hotel bills related to Tiffany Trump’s stay in Berlin totaling $19,289. The bills are labelled “URGENT!” and the first was filed just two days before Tiffany arrived in Germany, suggesting it was something of a last-minute trip. The same website shows two bills totaling just over $7,000 for hotel rooms in Dublin in late July in support of “E Trump Visit July 17.” In both cases, the adult Trump children continued on to other countries (Tiffany went to Hungary and Eric traveled to Scotland), so these line items may not even be the full amount that the Secret Service spent renting hotel rooms for agents to trail the president’s children. Nor do they include the cost of paying the agents for their round-the-clock work, their flights, their food, or any other costs incurred along the way.

This morning, USA Today reported that the costs of protecting Trump and his children—and their penchant for far-flung travel—is straining the Secret Service to its limits.

The agency’s director, Tex Alles, told the paper that more than 1,000 agents have already hit their federally mandated overtime caps. Agents are limited, by law, to a cap of $160,000 for their salary and overtime pay. But, Alles said, despite the limits on paying agents, the agency has to continue protecting the president and his progeny.

“The president has a large family, and our responsibility is required in law. I can’t change that. I have no flexibility,” Alles told the paper.

But the president and his family do have control over their travel. Besides his trips to Europe and the Middle East on official business and his rallies around the country, President Trump has left the White House nearly every weekend since taking office—decamping to one of his private clubs, sometimes for days at a time. Each trip requires planes, helicopters, motorcades, and dozens of agents. In May, conservative watchdog group Judicial Watch estimated that each hour Trump spends flying on Air Force One costs $142,000 and that each trip to Mar-A-Lago could cost taxpayers millions of dollars.

And while Tiffany Trump’s jaunt to Europe may be her first international trip as first daughter, her older brothers travel almost constantly—and, it seems, largely for the purpose of promoting family businesses. The July trip to Ireland wasn’t even Eric Trump’s first trip to the Emerald Isle this year. In April, he traveled to the Trump golf course in Doonbeg, Ireland. USASpending shows the Secret Service spent just over $11,000 on hotel rooms supporting that trip. And Secret Service hotel bills for an Eric Trump trip to Uruguay in January cost $97,000.

Again, those costs don’t include the salaries (and overtime) for the agents guarding Trump’s children or any other travel expenses. Just the hotels.

Trump doesn’t seem to be willing to cut the Secret Service any breaks. Earlier this month, the Washington Post reported that the Secret Service was abandoning a command post inside Trump Tower because of a dispute over rent—the Trump Organization is reported to be playing hardball with the agency over the lease.