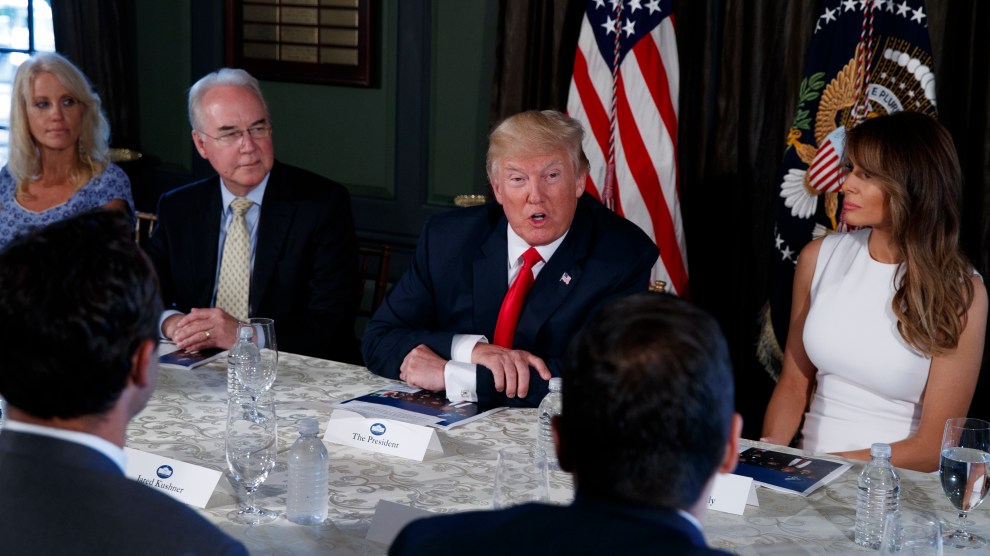 The Trump administration declined to declare a national state of emergency to fight the opioid epidemic Tuesday afternoon at a much-anticipated press briefing in Bedminster, New Jersey—despite that step being the “first and most urgent recommendation” of the president’s own commission.

The interim report from the Commission on Combating Drug Addiction and the Opioid Crisis was published last week and advocates for an emergency declaration as a way to “empower” Trump’s “cabinet to take bold steps” and “force Congress to focus on funding and empowering the Executive Branch,” all while unleashing millions of dollars in federal funding. Some states—including Florida, Maryland, and Arizona—have already declared states of emergency.

At his private New Jersey golf club, Trump attended a meeting with the first lady, presidential counselor Kellyanne Conway, Secretary of Health and Human Services Tom Price, and other officials. “The best way to prevent drug addiction and overdose,” Trump said, “is to prevent people from abusing drugs in the first place.” He continued, “If they don’t start, they wont have a problem. If they do start, it’s awfully tough to get off. So if we can keep them from going on and maybe by talking to youth and telling them, ‘No good, really bad for you in every way.’ But if they don’t start, it will never be a problem.”

Afterward, Conway and Sec. Price took questions from reporters. When asked if President Trump would declare a state of emergency, Price said the president is treating the crisis “as an emergency, and it is an emergency.” But he stopped short of actually declaring a state of emergency: “We believe that the resources that we need to bring to bear on the opioid crisis at this point can be addressed without the declaration of the emergency. Though all things are on the table,” he said, leaving, at least in theory, the door open for such a move in the future.

An emergency designation for the opioid crisis is broadly supported by public health experts, who argue more money is necessary to tackle an epidemic that killed more than 30,000 Americans in 2015. Just this morning, the Centers for Disease Control and Prevention published new provisional data that shows the number of deaths caused by drug overdose is continuing to increase.

The failure to declare a state of emergency today is just one more example of the administration’s shortcomings on addressing the opioid crisis. Had Republicans been successful in repealing the Affordable Care Act and passing new health care legislation, addiction services for millions would have been eliminated and Medicaid would have been cut by billions of dollars, devastating rural areas where President Trump finds much of his support. Meanwhile, Sec. Price degraded the use of opioid addiction medications as “replacing one opioid with another” and Attorney General Jeff Sessions has also taken a hard-line approach towards drug use reminiscent of the war on drugs.

The briefing from Conway and Price came within hours of President Trump’s incendiary remarks about North Korea, warning that if its threats of nuclear warfare continue, the country will be “met with fire and fury like the world has never seen.”