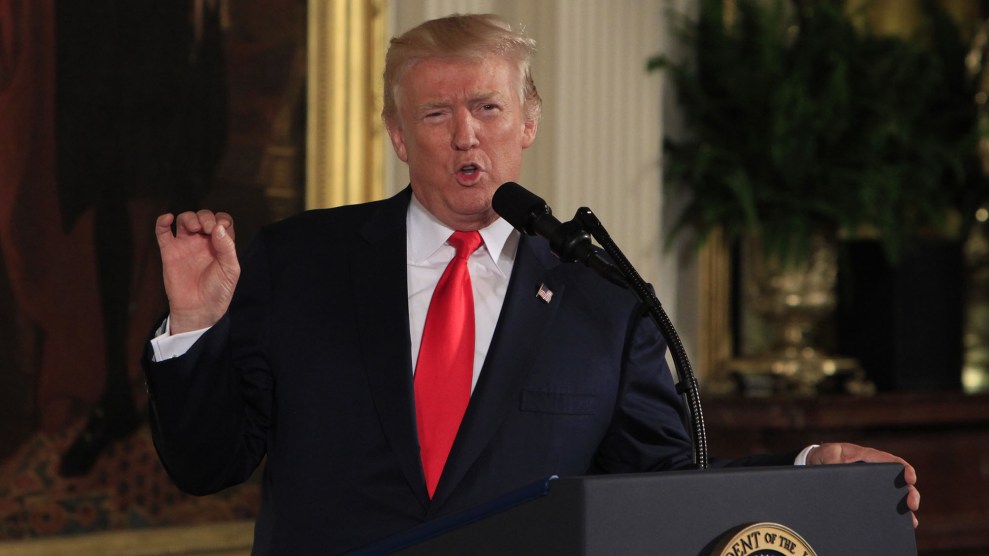 Republicans in the Senate have given up their dream of repealing Obamacare, saying that their efforts to pass a health care bill are dead—at least for now. “Until somebody shows us a way to get that elusive 50th vote, I think it’s over,” Sen. John Thune (R-S.D.) said this week. “Maybe lightning will strike and something will come together, but I’m not holding my breath.”

President Trump isn’t ready to surrender quite so easily. If he can’t succeed legislatively, he now threatens to sabotage Obamacare’s markets through executive power. In a series of tweets over the weekend, Trump suggested that he would end payments for an Obamacare program known as “cost-sharing reductions.” This program was designed to help low- income families deal with higher copays and deductibles by forcing insurance companies to offer them lower out-of-pocket rates. Insurance companies, in turn, would be reimbursed for those costs by the government.

If a new HealthCare Bill is not approved quickly, BAILOUTS for Insurance Companies and BAILOUTS for Members of Congress will end very soon!

After seven years of “talking” Repeal & Replace, the people of our great country are still being forced to live with imploding ObamaCare!

But Obamacare would more likely fail with his intervention, rather than without it. There are certainly lingering issues—primarily high premiums for middle class families who make too much money to qualify for government support—but the market is far from collapsing. The Kaiser Family Foundation currently projects that in 2018, only 19 counties in the country will lack an insurer offering plans on the market. Just 12,076 people are enrolled in those counties, and they represent 0.1 percent of people buying insurance through Obamacare’s marketplaces. Analysts expect that the markets will be profitable for insurance companies in 2018.

If Trump cuts off the reimbursements to insurance companies it would create chaos in the insurance markets, causing prices to soar and possibly leading some companies to stop offering coverage.

But as Mother Jones has explained previously, if Trump cuts off the reimbursements to insurance companies it would create chaos in the insurance markets, causing prices to soar and possibly leading some companies to stop offering coverage. If the president caused the payments to be stopped altogether, the insurers would still be required to offer the same lower deductibles and copays to low-income consumers. In that scenario, insurers would either be forced to raise premiums across the board, or stop offering plans for sale. Kaiser predicts that this would result in a 19 percent spike in premiums for everyone.

Most of those who sign up for insurance receive government subsidies that cap their premiums as a set percentage of their income. Should there be this spike, the government would pay the difference. Not so for middle-class families who don’t receive subsidies; cutting CSR payments will just raise their premiums.

Trump’s mere threat of ending CSR payments has already caused problems for next year’s insurance market, with the head of Blue Cross Blue Shield North Carolina planning to raise premiums by 22.9 percent for 2018 primarily thanks to the uncertainty created by Trump.

CSRs aren’t the only area in which the Trump administration could create havoc in order to fulfill the president’s promise of Obamacare’s downfall. Seemingly small administrative tweaks in how the rules are enforced could cause problems for millions of people as well. Over the weekend, Secretary of Health and Human Services Tom Price said during an interview on ABC that he might have his department stop enforcing the individual mandate, which could drive healthy people away from buying insurance and raise the costs for everyone else still buying individual coverage. “All things are on the table to try to help patients,” Price said.

The White House may generate uncertainty, but Congress is having none of it. Republicans in both chambers have said they want CSR payments to continue. The Senate committee in charge of health care announced on Tuesday that it will begin bipartisan hearings in early September to work on legislation to stabilize the remaining problems with Obamacare’s markets.