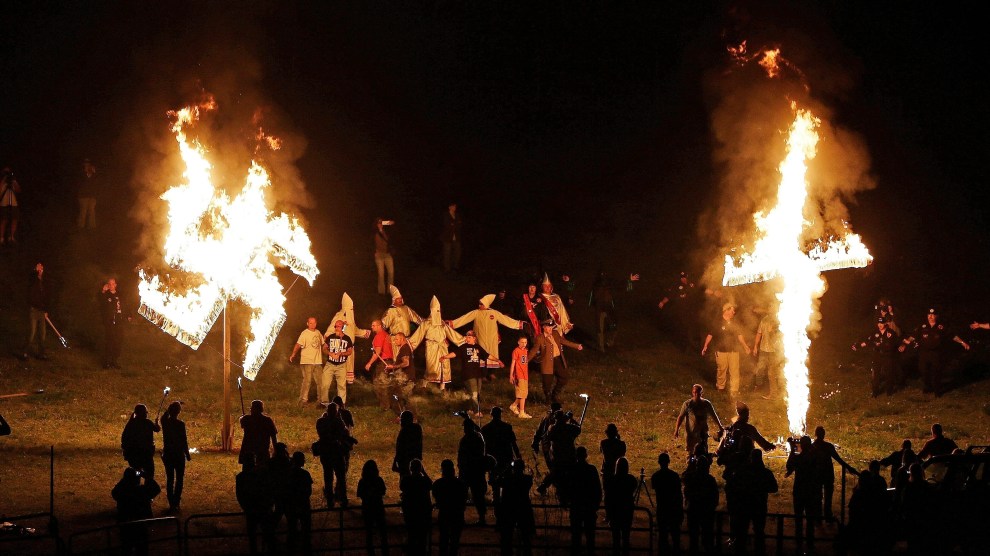 Last week I reported on concerns among US law enforcement and security leaders about a rising threat of domestic right-wing terrorism. For some, those fears were exacerbated by President Donald Trump’s equivocating response to the deadly car attack earlier this month by a neo-Nazi in Charlottesville, Virginia. As one high-level US official told me, Trump’s handling of the crisis “has been hard to view as anything other than a disaster. There are real concerns about where it leads the country.”

Trump also has a history of downplaying, if not downright ignoring right-wing terror attacks, as I’ve also documented. But in a speech at a national security conference in Salt Lake City on Wednesday, US Deputy Attorney General Rod Rosenstein went where Trump takes pains not to go. After telling an audience of law enforcement professionals that fewer radicalized Americans have been seeking to join ISIS overseas, though still pose a danger at home, Rosenstein addressed the threat from the far right: “The Department of Justice also remains vigilant about the threat of domestic terrorism,” he said. “Violent domestic extremists have plotted attacks on government buildings, businesses, and houses of worship. They have planned and carried out assassinations of police officers, judges, doctors and civil rights leaders. They have acquired biological and chemical weapons, illegal firearms, and explosives. They have carried out killing sprees that terrorize local communities.”

Rosenstein specifically called out recent cases involving white supremacists and other far-right extremists that Trump has said little or nothing about—including the massacre of black church congregants in Charleston, South Carolina, the murder of two police officers in Las Vegas, and a plot to kill Somali immigrants living in Kansas:

Violent domestic extremists pose a particular danger to law enforcement officers — not just because you go into dangerous situations, but because some extremist groups target the police.

In June 2014, two Las Vegas police officers were killed during an ambush attack while eating lunch. The killers then murdered another innocent victim. During the attacks, they declared the beginning of a so-called revolution.

There are many other examples of attacks by criminals fueled by a pernicious anti-police ideology – Dallas, New York, Baton Rouge, Kissimmee, and other tragedies.

Domestic terrorism is often motivated by hatred and bigotry. Last October, three suspects were indicted on federal charges for a plot to target an apartment complex in Garden City, Kansas, where Somali immigrants live and worship. The charges include civil rights violations. Those defendants are now awaiting trial….

Yesterday, you heard a presentation about Dylann Roof’s diabolical attack at the Emanuel African Methodist Episcopal Church in Charleston, South Carolina. Roof murdered nine innocent and unarmed members of a Bible study group. He espoused his desire to spark a race war. Roof was convicted on hate crime charges, and sentenced to death.

Rosenstein also talked about the chaos and violence in Virginia that Trump blamed “many sides” for: “In Charlottesville this month, we saw and heard people openly advocate racism and bigotry,” he said. “Our Department of Justice responded immediately. We are working closely with local authorities on potential criminal civil rights prosecutions. The First Amendment often protects hateful speech that is abhorrent to American values. But there can be no safe harbor for violence.”

Rosenstein’s remarks follow a notable statement from Attorney General Jeff Sessions in the aftermath of Charlottesville, which was to some degree obscured by Trump’s days of controversial comments. The car attack that killed one person and injured dozens of others was an “evil act,” Sessions said on August 14, and meets the “definition of domestic terrorism.”