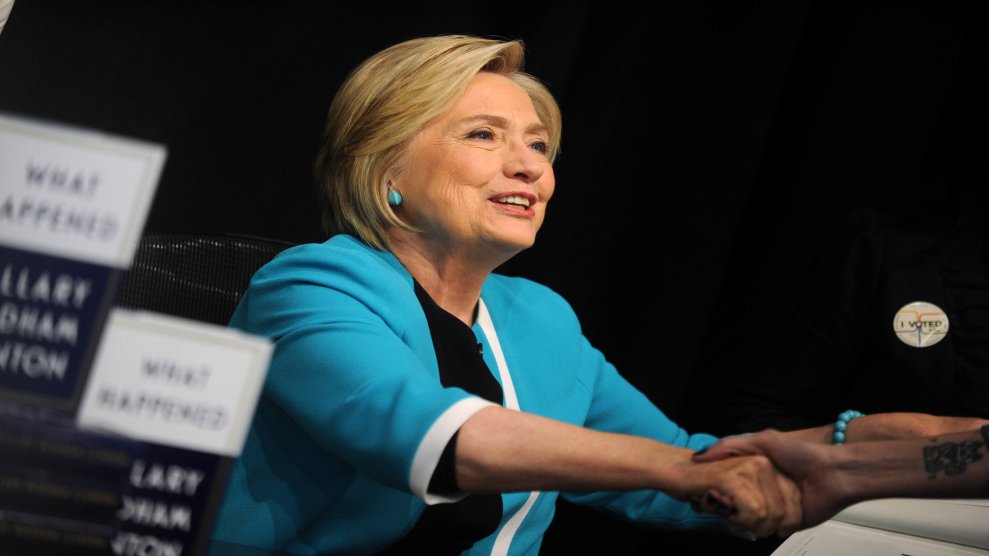 Hillary Clinton signs copies of her new book ''What Happened."/Starmax/Newscom via ZUMA Press

Comey “should not have been fired for Russia,” Clinton argued on NBC’s Today show, as she promoted her new book on her defeat in the 2016 election. But Comey “should have been disciplined, whether or not fired—that’s not for me to say—for the way that the behaved in the email investigation,” she added.

Clinton’s distinction highlights the wild swings Comey’s reputation has taken over the past sixteen months due to his central role in two big scandals: his handling of an FBI investigation into Clinton’s use of a private email as secretary of state and the bureau’s investigation of Russian interference in the 2016 campaign.

Clinton argues that Comey’s announcement 11 days before the election that the FBI was looking into a newly discovered set of her emails cost her the election. Comey told a House committee in May that the notion his action may have swayed the election made him “mildly nauseous.” Clinton countered Wednesday that “it made me sick to hear that, because of course he did.”

Comey drew an attack earlier this week from White House Press Secretary Sarah Huckabee Sanders. Sanders said on Tuesday that the Justice Department should consider prosecuting Comey for publicizing details of his contacts with Trump and for what she said, without citing evidence, were false statements by Comey to Congress.

“If there’s ever a moment where we feel someone’s broken the law, particularly if they’re the head of the FBI, I think that’s something that certainly should be looked at,” Sanders said. She reiterated the White House criticism of Comey during a briefing on Wednesday afternoon.

Clinton, in her book and during her Today show appearance, praised the written rationale initially presented by White House aides to explain Comey’s May dismissal, a memo in which Deputy Attorney General Rod Rosenstein was critical of Comey’s conduct in the email investigation.

The memo, citing former Justice Department officials from both parties who had criticized Comey for his actions in the email case, faulted the director for holding a July 2016 news conference in which he announced the bureau was recommending that Clinton not be prosecuted but then excoriated her for her email practices at the State Department. The announcement broke with standard Justice Department practice of not disparaging people who are investigated but not indicted. (The FBI generally is not in the business of determining whether prosecutions occur. That job is left to Justice Department prosecutors. But in this case, Attorney General Loretta Lynch, having been criticized for meeting with Bill Clinton during the investigation, said she would follow whatever the bureau recommended.)

Soon after the Rosenstein memo’s release, Trump disclosed in a televised interview that he had fired Comey over frustration with “this Russia thing.” Comey later revealed that the president had unsuccessfully pressed the FBI director to publicly say that Trump was not personally under investigation and to end the FBI’s investigation of former National Security Adviser Michael Flynn.

Clinton writes in her book that she was stunned by Rosenstein’s memo. “Here was Trump’s number two man at the Justice Department putting in writing all the things I’d been thinking for months,” she writes. “It was as if the world had finally come to its senses.”

But Clinton says she was not surprised by Trump’s later public indications that he fired Comey because of the Russia investigation. Once Comey confirmed to Congress in March that the FBI was investigating Trump campaign ties to Russia, Clinton writes, Comey was “on borrowed time.”

Clinton acknowledges her view of Comey might seem complicated. “To make sense of this, you have to be able to keep two different thoughts in your head at the same time,” she writes. “Rosenstein was right about the email investigation, and Comey was wrong. But Trump was wrong to fire Comey over Russia. Both those statements are true. And both are frustrating.”

Citing the Trump campaign’s contacts with Russians, Trump’s financial ties to Russia, US intelligence agencies’ conclusion that Russian President Vladimir Putin ordered an effort to help elect Trump, and Trump and his allies’ pattern of lying about interactions with Russia, Clinton says she is convinced that Trump associates collaborated with Russia during the election.